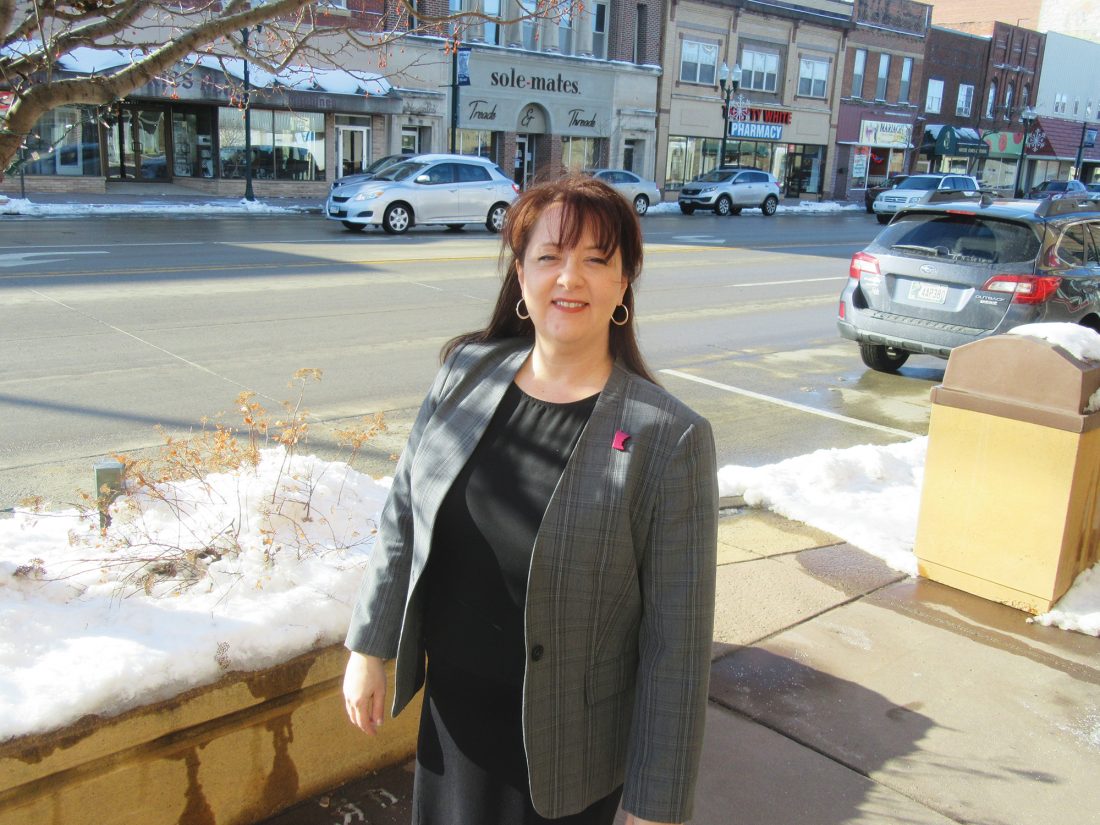 MARSHALL — Local government takes many forms — counties, cities, townships, and school districts. And Minnesota State Auditor, Julie Blaha works with all of them.

There’s a lot to learn about local governments and the communities they serve, so Blaha has been taking road trips through different parts of the state.

“We knew we wanted to travel more,” especially in rural Minnesota, Blaha said. The change in state leadership this year offered a good chance to do that.

On Tuesday, Blaha met with officials in southwest Minnesota counties, with stops in Redwood, Yellow Medicine, Lyon and Lincoln counties. Blaha has already made some visits in northern Minnesota — including a stop in Kittson County during its first major snowstorm of the season, she said.

In Marshall, Blaha met with Lyon County Auditor/Treasurer E.J. Moberg, and Lyon County commissioners Gary Crowley and Charlie Sanow. Moberg said the meeting was more of a conversation of how things were with the county.

“I wanted to hear what she had to say,” as well as what Blaha’s possible legislative ideas were, Moberg said. While Lyon County currently uses a private accounting firm to conduct its annual audits, those audits still get reviewed by the state office, he said. Lyon County also uses resources like reports and compliance guidance from the Auditor’s Office. “We want to maintain a healthy relationship with the State Auditor’s Office.”

Some of the conversation on Tuesday concerned the cost of state audits to counties, Moberg said.

He said the State Auditor’s Office can’t offer counties a fixed bid for auditing services, which creates uncertainties about what those services will cost.

“And we want to make sure if we pay for something, it’s something we’re going to get some benefit out of,” he said.

One of the major reasons Lyon County switched to a private accounting firm to conduct its audits was to help save money.

On the southwestern Minnesota tour, Blaha said, “We’re hearing a lot about good fiscal responsibility.” Being able to help provide accountability to local government is also important for the State Auditor’s Office. However, Blaha said, “I think we need to have an honest conversation,” about how to achieve that. “Do we have enough resources going to accountability right now?” She noted that staffing levels at the State Auditor’s Office have decreased 45% since 2003.

Blaha said another thing the state auditor’s office is doing is moving forward from a lawsuit over a 2015 law allowing Minnesota counties to hire private accounting firms for their financial audits. Former State Auditor Rebecca Otto had challenged the constitutionality of the law, and sued Becker, Ramsey and Wright counties, three of the counties that opted not to have the state office conduct their audits.

The case made it into the Minnesota Supreme Court, which upheld the 2015 law.

People are “absolutely ready” to move past the lawsuit, Blaha said. She said some of the first counties she reached out to after becoming State Auditor were the counties directly involved in the lawsuit, and she also reached out to organizations like the Association of Minnesota Counties.

“They were really able to help give us a road map to turn the corner,” Blaha said. It’s important for her to work with Minnesota counties regardless of whether they hire the State Auditor’s Office to conduct annual audits.