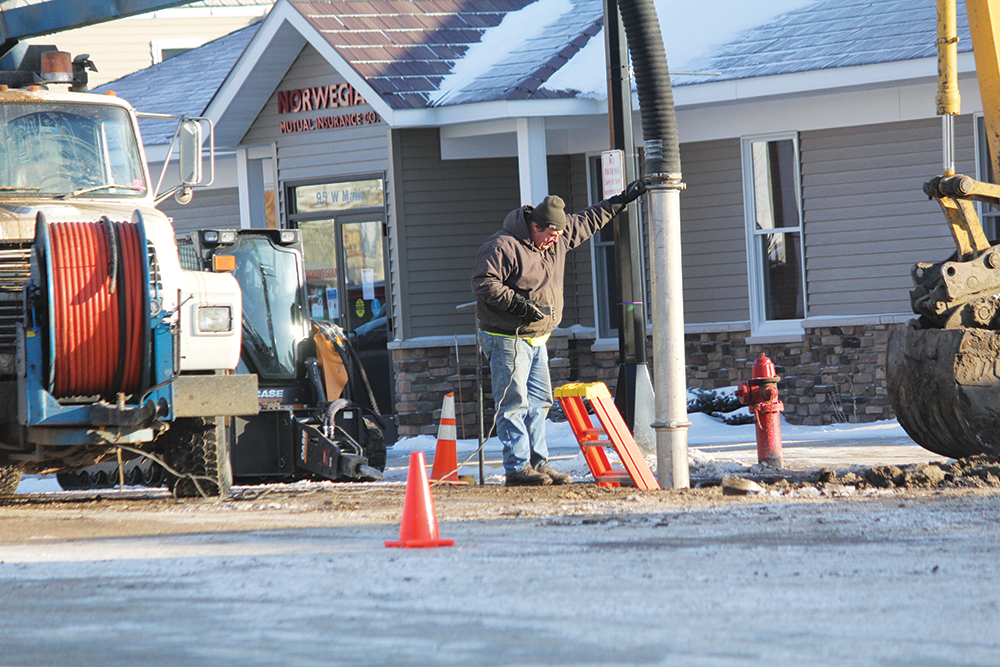 Photo by Deb Gau A Cottonwood city crew was at work trying to find and repair a broken water main on East Main Street on Tuesday afternoon. The break was reported Monday evening. The city of Cottonwood has issued a boil water advisory for residents.

The city of Cottonwood experienced water problems this week because of a “massive water main break” which happened at 5 p.m. Monday on Main Street, said Samantha Judovsky, the administrative assistant for the city.

However, a post shortly after 6 p.m. Tuesday on the city’s Facebook page notified residents that the break was fixed.

“The Minnesota Department of Health will be coming out tomorrow (Wednesday) to test the water for any contaminates in the City of Cottonwood. The boil water advisory is still in affect Until Thursday afternoon or until we hear back the results,” the post stated.

“The city maintenance crew and others are working on an infrastructure project to repair or replace these utility lines that are in poor condition,” according to earlier Facebook posts.

Judovsky said the city’s infrastructure is already bad and the cold weather was probably a factor in the break.

Water was shut off from the city water tower for a period of time, but the tower was refilled by Tuesday morning, she said.

“Main Street does not have water,” Judovsky told the Independent Tuesday afternoon.

She said workers were trying to “locate the leak or break” which is by Norwegian Mutual Insurance on East Main Street. Once the break was found, workers could start making repairs, she said.

Residents were told they may shower and use the water, but the town is still in a boil water advisory that ends tonight. There are notices posted around town advising residents on proper procedures for boiling water.