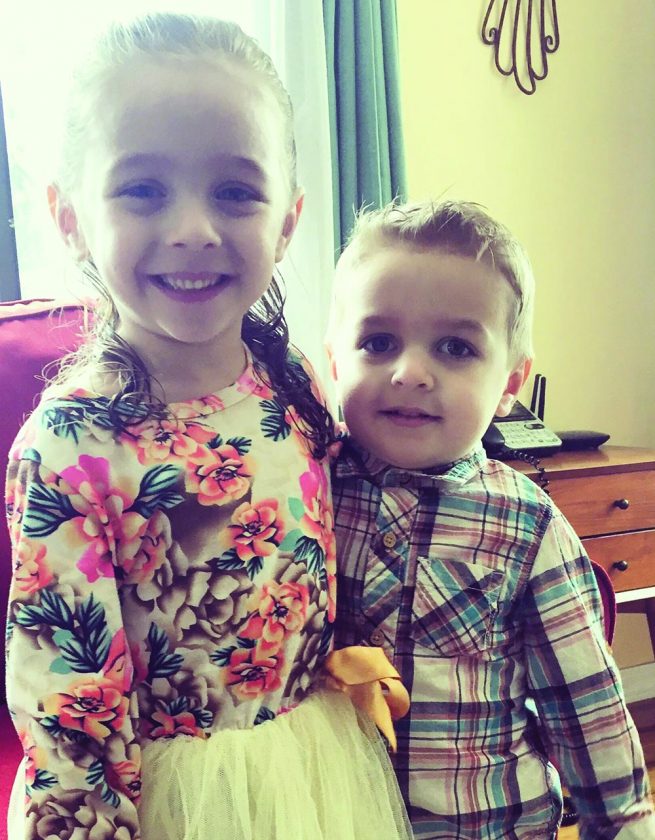 Submitted photo Piper Flores, who turned 4 last month, stands by her brother, Dawson Flores, who is 2. A video of Piper’s recitation of the Pledge of Allegiance will be aired on Headline News today during its “Salute to the Troops” segment.

Piper Flores, the daughter of Becca and Tommy Flores of Marshall, learned the Pledge of Allegiance at True Light Christian School preschool. Her mom filmed Piper reciting it and sent it to HLN, which runs a “Salute the Troops” segment every morning.

The family has HLN on TV in the mornings.

“We sent the video in a message to their Facebook page and within a couple hours they messaged us back and loved it,” said Becca Flores. “They said they would show it to their producers and they soon messaged us saying they wanted to use it in their ‘Salute to the Troops’ segment they do every morning. We were so shocked we got a response and just so excited that they wanted to show it.”

Piper’s 2-year-old brother, Dawson, stands by her in the video.

“We are so proud of Piper in reciting it, but we are really proud her school still makes it a priority to teach kids the pledge of allegiance,” Flores said.

Piper’s video can be seen today 6-10 a.m. ET on HLN during “Morning Express with Robin Meade.”

“It will be repeated a few times on HLN and also will be posted on their Facebook page,” said Flores.