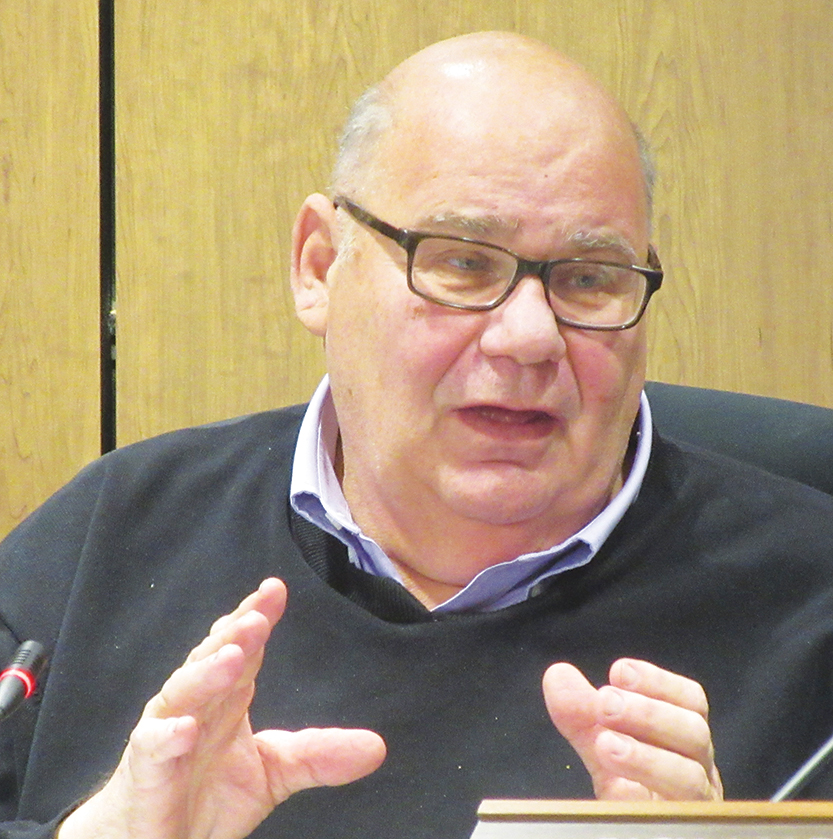 Photo by Deb Gau Lyon County Commissioner Charlie Sanow explained some of the proposed changes to the county’s pay grade system during Tuesday’s county board meeting.

MARSHALL — Lyon County employees in several different positions could move up into new pay ranges next year after county commissioners voted to approve a new pay structure. Most of the current employees affected by the changes will be county jailers and dispatchers, said Lyon County Human Resources Director Carolyn McDonald.

McDonald said the pay changes will mean an additional cost of a little less than $20,000 for the county in 2020. However, she said that would only be a small increase to the county’s overall employee pay costs. The changes will also help put Lyon County in “a more competitive place” on the job market, said Commissioner Charlie Sanow.

The county has updated its employee compensation system a couple of times within the past six years. In 2013, Lyon County implemented a pay grade system based on a study by the Archer Company. When the county was left with questions about where some of its Information Technology employees fit into the system, it worked out a new evaluation system for them. The evaluations worked on a point system that took factors like education requirements, job duties and working conditions into account for each position.

The updates commissioners discussed Tuesday would help bring the county’s pay structure more in line with the current market, McDonald said. Last year, McDonald met with county commissioners and Lyon County Administrator Loren Stomberg to compare Lyon County’s pay grades with data from a salary survey by the Association of Minnesota Counties. To help make the comparison accurate, they only looked at salary data from Greater Minnesota counties.

Stomberg said the proposed pay grade system was based on a mix of the Archer Company plan and the point system the county worked out. Starting Dec. 30, a total of 10 county job titles would be moved to higher pay grades to help stay at market rates, McDonald said. The majority of the employees affected by the changes would be jailers and dispatchers, she said.

Under the new system, jailer and dispatcher positions would move up one pay grade to the same level as a property appraiser or a general equipment operator. Jobs at that grade would have annual pay ranging anywhere from a minimum of about $41,615 to a maximum of about $58,272 in 2020.

The county engineer would move up to the county’s second-highest pay grade under the new system. That pay grade would put the engineer position on the same level as the county attorney and sheriff, with 2020 pay levels ranging anywhere from a minimum of about $91,087 to a maximum of about $127,522.

Some county positions would move up more than one pay grade under the new system. McDonald said the positions of county facilities director, IT director and chief sheriff’s deputy would each go up two pay grades from where they were. The county human resources director would go up five pay grades, McDonald said. Under the new system, the human resources director position would be on the same pay grade as the chief deputy, the county auditor/treasurer, and the county environmental administrator. Jobs on that pay grade would have 2020 pay ranging anywhere from a minimum of about $75,833 to a maximum of about $106,213.

“We don’t point the position by the person,” Sanow said. The group tasked with going over the pay grade system went through each job and considered both the job responsibilities and the state pay data, he said. Taking those things into account, the human resources position was not at the pay grade it should have been, he said.