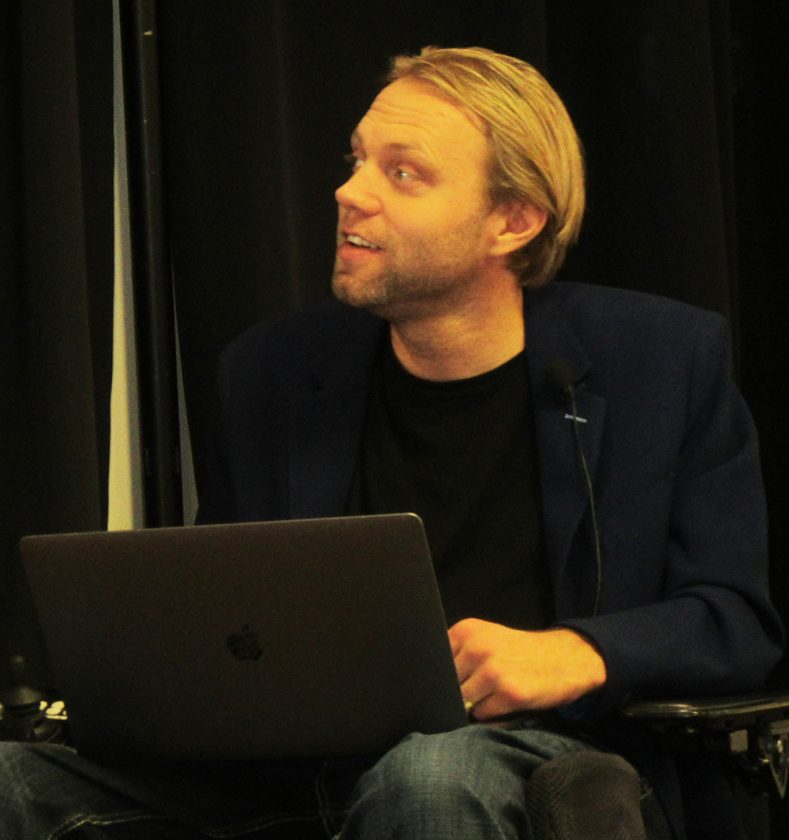 Photo by Karin Elton Dr. Peter Grahn speaks to students and professors at Southwest Minnesota State University Wednesday on the factors which led him from graduating from SMSU to receiving his Ph.D and conducting neuroscience research at the Mayo Clinic in Rochester.

MARSHALL — An ankle injury piqued his interest into the medical field and a catastrophic spinal injury steered him into spinal cord research.

As a neurosurgery and physical medicine and rehabilitation professor at the Mayo Clinic, Grahn and his team have garnered international attention for their groundbreaking research surrounding electrical stimulation of the spinal cord which, when combined with therapy, helped a Wisconsin man regain some use of his legs, which were paralyzed in a 2013 snowmobile accident.

Grahn told the audience that he lived on a small dairy farm near Willmar for his first 18 years of life.

“I had an ankle injury in high school and had to do physical therapy and that’s really where I fell in love with medicine,” he said.

“I wanted to go into physical therapy or some kind of sports medicine,” he said.

But in 2005, two weeks before going to college, a dive into shallow waters from a dock on Green Lake near Spicer resulted in a fractured vertebra in his neck and he was left with quadriplegia. After fusion surgery he entered rehab at Sister Kenney in Golden Valley and Minneapolis where he learned how to live his new life in a wheelchair and with limited use of his hands — “how to eat, to brush my teeth, to use a computer,” he said.

He asked his doctors “Why can’t the spinal column heal like a cut?” Grahn said. The answer was they didn’t really know, so he thought maybe there was a career opportunity for him.

He soon heard of a college that was wheelchair accessible.

“I took a tour and thought it was a great place to go to school and it was close to family,” he said, so he decided to attend SMSU and study biology.

In addition to studying biology he met Kelsey, who would become his wife.

“She was a year behind me so I decided to add a chemistry major,” he said, explaining why he was at SMSU for five years.

During his junior year, he and Kelsey attended a research symposium where the keynote speaker was Dr. Anthony Windebank who talked about his laboratory where they do research on regenerative medicine and spinal nerves.

“The talk was fascinating,” he said.

In speaking with Windebank later, he boldly asked if it would be possible to work for him in his research lab. After graduation from SMSU, he was accepted into the Office for Diversity’s Post-baccalaureate Research Experience Program at Mayo Clinic where he had the opportunity to work in the regenerative medicine laboratory.

“So the three of us moved to Rochester,” Grahn said. There were three to move because Kelsey was pregnant with their first child, Zoey, who eventually was followed by a brother, Rykon.

“It was an exciting time — big changes in our life,” he said.

Grahn said the program at Mayo Clinic provided mentorship, helped with presentation skills, exam preparation, grant writing workshops, networking opportunities and lectures from professors on “how they reached the position they were in their careers.”

After one year, he was accepted into Mayo Graduate School, beginning his dissertation project within the Neural Engineering Laboratory.

He worked on various animal models with spinal cord injuries and placed wires into the spinal cord and connected it into a stimulator to try to control different aspects of movement.

“(The research) did push the boundaries of developing new technologies so the next generation of researchers can take that and advance further,” he said.

After receiving his Ph.D, Grahn said he transitioned on at the Mayo Clinic to do further research.

Grahn said, while he spends a lot of time looking into a microscope, his career has also given him the opportunity of attending conferences in places such as San Diego, Calif., and Houston, Texas, and Florida.