A place they can call home

Community members celebrated Saturday, as a family moved into a new home built by Redwood River Habitat For Humanity 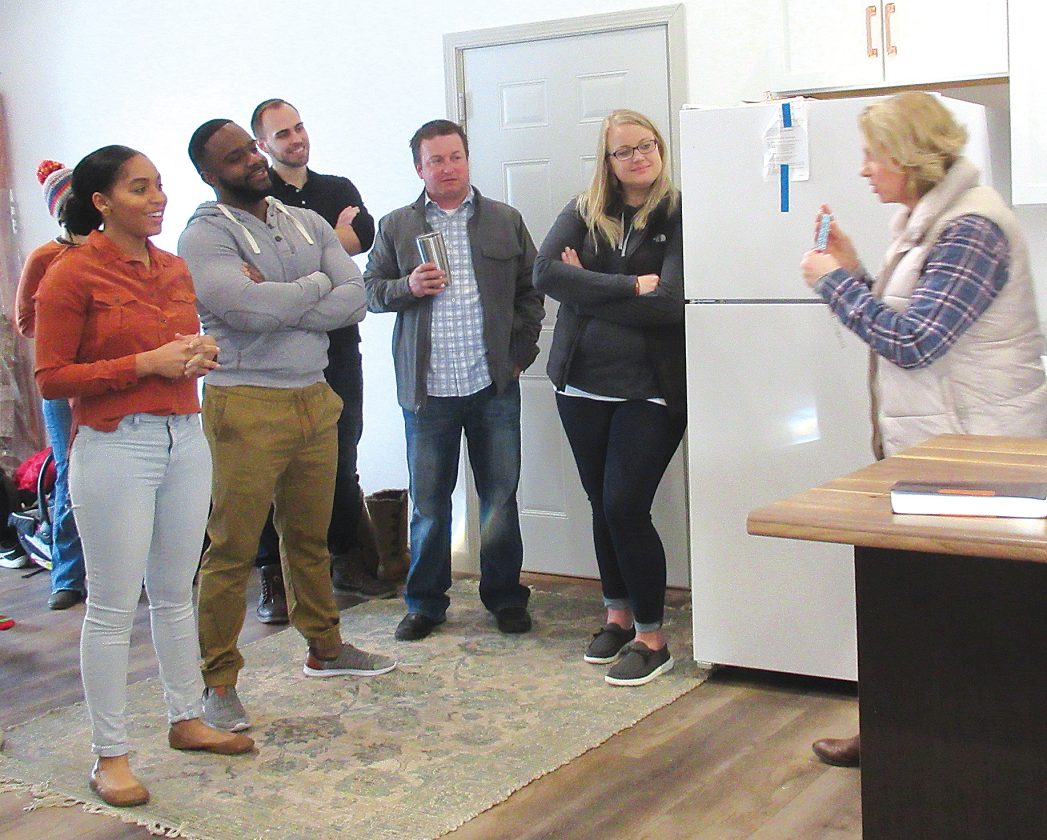 Photo by Deb Gau Community members gathered around as Andrea Cayo and Clawsondy Cayo, at left, were presented with keychains and keys for their new home.

MARSHALL — The house on Rainbow Drive was finished, and built to stay warm through the Minnesota winter. But there was still something missing — until board members from Redwood River Habitat For Humanity presented Clawsondy and Andrea Cayo with the keys to their new home.

“The Lord’s built you a house. But I’m going to commission you, because your job is to make this house a home,” Redwood River HFH executive director Charlie Sanow told the Cayos during the dedication ceremony for their house.

Area community members and members of the Cayos’ family gathered Saturday to celebrate the dedication. The Cayos’ new home is the 19th built in the area by Redwood River HFH, and the sixth within Marshall, Sanow said. Ground was broken for the three-bedroom ranch house in July.

It was an exciting day for the Cayos and their baby son Samuel to be able to move into their own home. At the same time, the Cayos said they were thankful to have the community’s help to build it.

Clawsondy Cayo said the house wasn’t just built on a foundation of concrete.

“It’s the foundation of your hearts,” he said to the people gathered at the dedication. “It’s amazing to have seen what came from this.”

Andrea Cayo said she felt called to keep their home open to other people in the community, as well.

The Cayos’ home, like each of Redwood River HFH’s house builds, was made possible with the help of the community. Donations from local businesses and citizens, and profits from the HFH ReStore on U.S. Highway 59 in Marshall, helped fund the house. The Cayos helped build their house together with volunteers, and they will also be paying an affordable mortgage.

In addition to members of the Redwood River HFH board, Sanow said individuals including Gary Becker, and local businesses like Coequyt Plumbing and Heating, US Bank, and Extreme Panel Technologies, all helped make construction of the Cayos’ new home possible.

“These houses are very energy efficient,” which will help save on heating costs, Sanow said.

Representatives from the city of Marshall and Lyon County were present at the dedication to welcome the Cayos to their new home. City Council member Russ Labat encouraged Clawsondy and Andrea to be part of the Marshall community.

“This is a place you can call home,” Labat said.

Faith was also an important part of the dedication ceremony. The Cayos were presented with a Bible and a handcrafted wooden cross as reminders to have God as the foundation for their lives.

“We are proud of you guys,” said the Rev. Doug Wing, senior pastor at Grace Life Church. But even though building the house was quite a process, Wing said, the home and family the Cayos will build was what really mattered.