Tall Grass Liquor ranked among some of the top-selling stores in the state last year, according to a report by the State Auditor 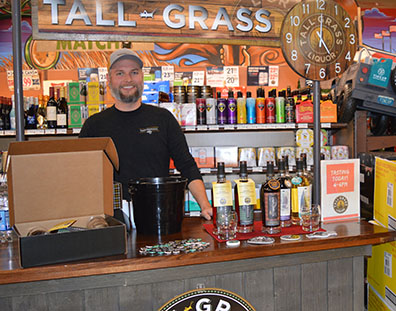 Photo by Deb Gau Blaine Young II was serving samples to customers at Tall Grass Liquor in Marshall on Thursday afternoon. Young said it was the second sample event he’d worked at in Marshall in the past few weeks.

While Marshall city staff said it was good to see business going strong at Tall Grass Liquor, it’s also positive news for Marshall taxpayers. Cities can use profits from their municipal liquor stores for public projects, or as a revenue source.

“For the city, it’s been beneficial,” said Marshall City Administrator Sharon Hanson. Using some of the profits from the liquor store allows Marshall to reduce its property taxes. In 2020, the city is proposing to use $300,000 of liquor store funding to help lower its levy, she said.

While municipal liquor stores were making millions in sales, they also transferred out millions of dollars in profits to Minnesota cities in 2018, the report said. Statewide, the stores had net transfers of $21.7 million. That was also an increase over the statewide total net transfers made in 2017.

Tall Grass Liquor ranked 22nd in gross sales out of all municipal liquor stores statewide, the report said. The next-highest ranking city from southwest Minnesota was Worthington, which had gross sales of over $4.13 million at its liquor store.

“I think we’re seeing a really good sales trend,” said Tall Grass Liquor manager Eric Luther. Tall Grass was seeing “strong single-digit growth,” he said — sales were increasing, but not so sharply that it would be unsustainable from year to year.

The report said Marshall’s municipal liquor store had one of the highest profit margins in the region in 2018. In the southwest economic development region, Marshall ranked second in profit margins for off-sale only liquor stores, coming in ahead of cities including Worthington, Tracy, Luverne and Redwood Falls. While it didn’t beat Marshall in sales, Pipestone’s municipal liquor store had the highest profit margin in the region, with net profits representing 9.3% of sales, compared to Marshall’s 9%.

Among liquor stores that had both on- and off-sales, Avoca’s had the highest profit margin in the southwest economic development region. The Avoca liquor store had net profits making up 16.5% of its sales in 2018.

Not all municipal liquor stores in the region were doing well last year, however.

The State Auditor’s Office reported that liquor stores in 38 Minnesota cities reported net losses for 2018. All but one of those cities were in Greater Minnesota.

Luther said Tall Grass Liquor’s draw and its location in a regional center were both factors that helped it in sales. The new store facilities also allow for more variety of products, as well as special displays and events. One of the recent additions to the store is a “Pick Six” section where customers can choose their own variety of craft beers.

“We know people come here (to Marshall) to work and to shop,” Luther said. “We want to be considered a place to come while they’re doing all that.”

Luther said the ongoing challenge for Tall Grass Liquor is to have the right levels of sales and profits to be successful, and to generate money for the community.