They are the talk of the town 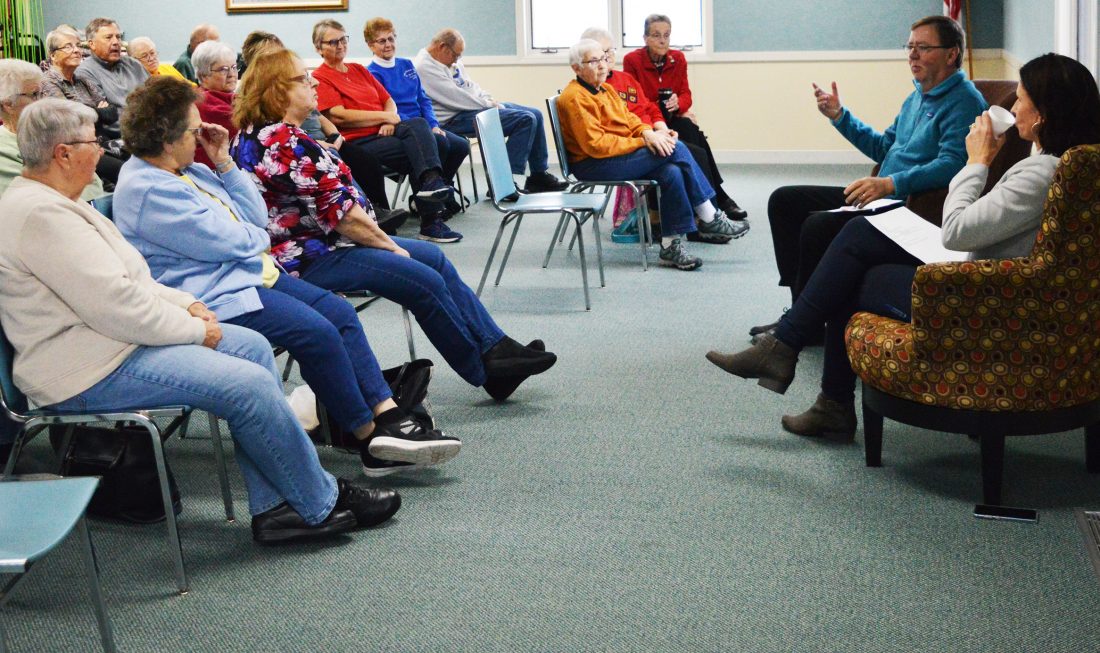 MARSHALL — It was a chance to sit down and have a chat over a cup of coffee — but this time, the conversation had some special guests. Marshall Mayor Bob Byrnes and Marshall City Administrator Sharon Hanson visited the Marshall Adult Community Center on Thursday morning for an event called “Talk of the Town.”

Byrnes and Hanson took questions from the audience, and gave updates on everything from city planning, to recent development and construction in Marshall.

The event was meant to be similar to the ACC’s “Coffee with Cops” talks with local law enforcement officers, said program specialist Heather Radke.

Some of the audience questions Thursday dug deeper into the planned renovations at Marshall’s city hall building, and other building and economic development around Marshall.

The city is currently planning an estimated $6.1 million project to renovate the Municipal Building on Main Street. The renovations will address issues ranging from concrete damage around the building’s garage, to problems with handicapped accessibility. Part of the project, Hanson said, “is really a refresh of the city hall itself.”

“I think City Hall is often the front door to your community,” Hanson said. If the building issues could be addressed, the current city hall would have enough space for current needs, and would avoid leaving a vacant spot on Main Street, she said.

Some audience members asked how the city would address the lack of parking in front of city hall, or whether it would’ve made more sense to build a new city hall for the price of the renovations.

Byrnes said regardless of whether the city opted to fix its current city hall or build new, the project would likely have a multimillion-dollar cost.

Residents also asked if anything was being done to fill up or redevelop the Market Street Mall.

“Without a doubt, it is a great need,” Hanson said. She and Byrnes said the mall’s owner has tried to redevelop the property, and has filled some vacant space with offices. An earlier plan called for opening up the mall into a strip mall, but Byrnes said the proposal ran into problems when investment from a planned housing and hotel development didn’t happen.

“If we could get something going there, it would be fantastic,” Hanson said. However, she acknowledged that the current retail climate for enclosed shopping malls is difficult.

Byrnes said representatives from the city have met with Schwan’s employees after the company announced in March that it was being sold to South Korean food company CJ. At the same time, the Schwan family was retaining ownership of Schwan’s Home Service.

Byrnes said details of the sale transition were still being worked out.

“I’m optimistic,” he said. “They see both sides as growing.”

“What they’ve communicated to us is that CJ is a company that’s interested in food manufacturing,” as opposed to buying Schwan’s for its brand names, Byrnes said.

Schwan’s is still the largest employer in the community, Byrnes said.