Thanks for your service

Holy Redeemer students reach out to soldiers on Veterans Day 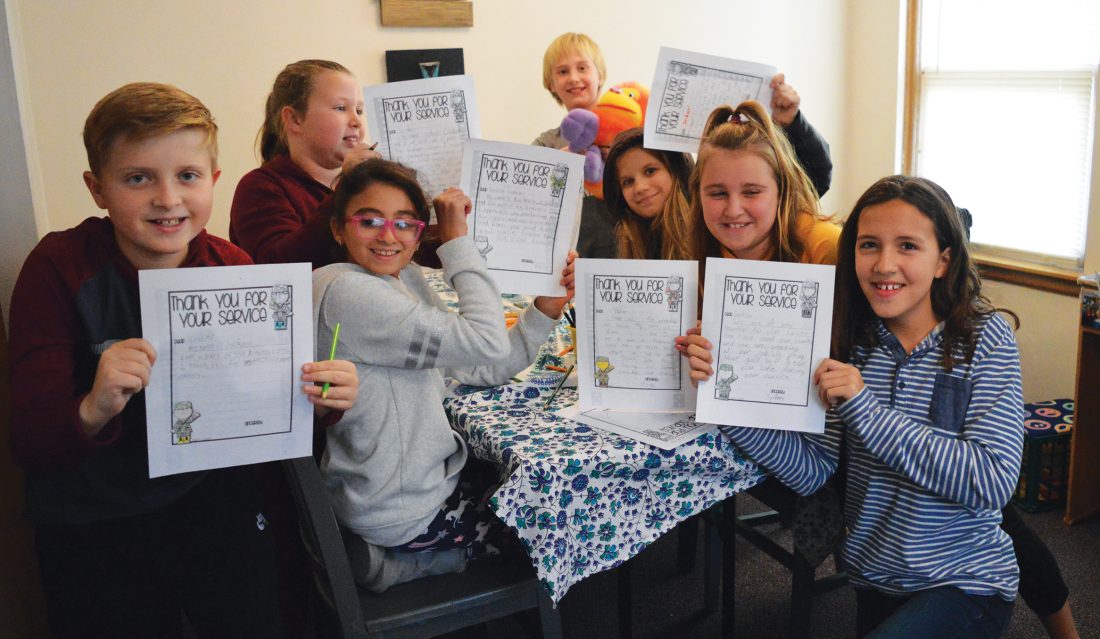 Photo by Deb Gau Students at Holy Redeemer School in Marshall gathered after class on Monday to learn about Veterans Day and write letters to U.S. military service members.

MARSHALL — Class had ended half an hour ago, but the dozen kids sitting around tables in a room at Holy Redeemer School on Monday afternoon still had their heads bent over sheets of paper and pencils in their hands.

The big headings on the sheets, reading “Thank you for your service!” showed the reason for all the writing. As part of a Veterans Day service project, around 30 Holy Redeemer students in all were writing letters to U.S. military service members.

Everyone’s message was a little bit different, but all were showing their appreciation.

“From the national anthem, I used the ‘home of the brave’ part in it,” Annabel Coudron said about her letter. In the next line, Coudron wrote, “You’re a brave person,” for the recipient of the letter.

The students writing letters were gathered for Kindness Crew, an after-school program geared toward doing good things for others. Students said some of their favorite past service projects with the group have included making fleece tie blankets and care packages for patients at Avera Marshall Medical Center, and making Valentine’s Day cards for residents in assisted living homes. Kindness Crew adviser Mary Surprenant said this month some of the younger students also collected candy for a program called Operation Gratitude, which sends care packages to U.S. military service members stationed overseas.

As part of the Kindness Crew’s meeting on Veterans Day, students learned about the meaning of the holiday and the sacrifices of military members. Surprenant shared her own family’s story. Her grandfather fought in World War I; her father in World War II; and her older brothers Gene, Gary and Dick Scharfencamp all served in the military during the Vietnam War. Gary was wounded in the foot by shrapnel, and lost hearing in one ear from an explosion, Surprenant said.

It might not have sounded like a major wound, “But he spent four months in the hospital in Vietnam,” she said. “I still remember my class (in school) all making him cards.”

Ironically, Gary was wounded on Veterans Day in 1968, Surprenant said. Surprenant was able to show Gary’s Purple Heart medal and dog tags to the Kindness Crew.

“I think it’s special that we remember, and we honor and we thank our servicepeople,” Surprenant told students.

Students wrote down their own messages for U.S. troops and decorated the letters.