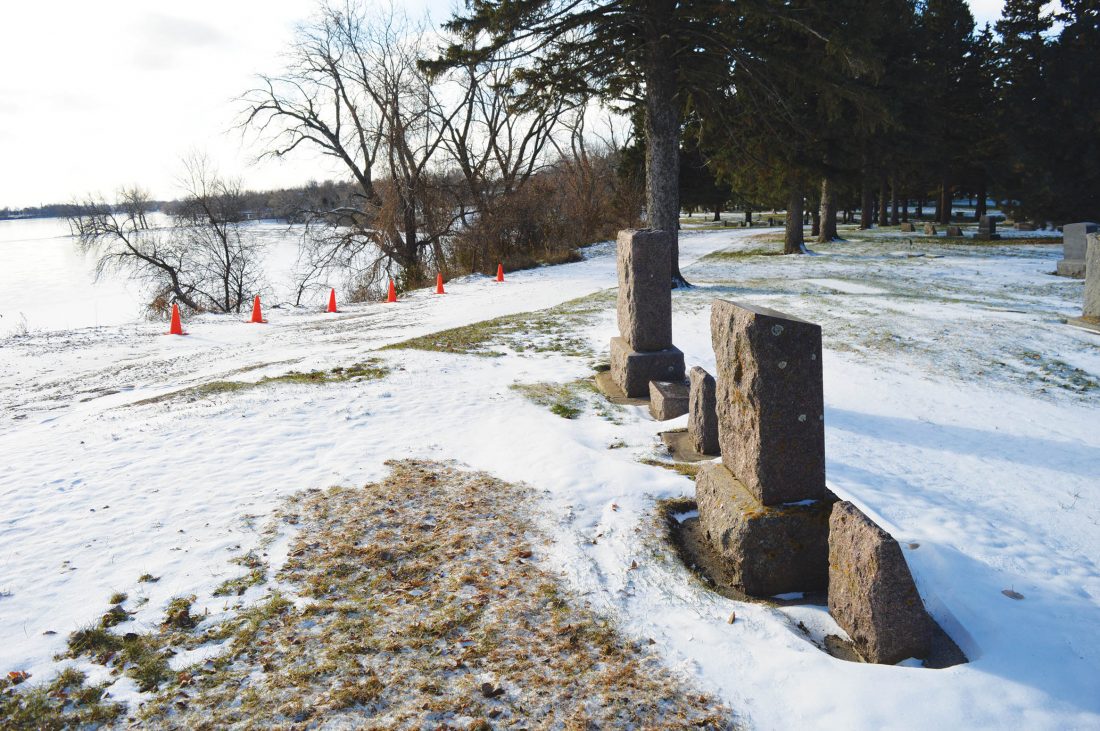 Photo by Deb Gau In the photo, orange traffic cones at Lakeside Cemetery in Balaton mark the spot where a large part of the shore of Lake Yankton washed away earlier this year. Lakeside Cemetery Association members said visitors to the cemetery avoid using the access road affected by the erosion.

BALATON — It’s not a new problem for property owners along the shores of Lake Yankton, Bob Fricke said.

“The lake level has been abnormally high for several years,” and brought erosion of the lakeshore with it, said Fricke, president of Balaton’s Lakeside Cemetery Association. But in the past year or two, the high water and some major rain events have had a dramatic effect on the cemetery. Orange traffic cones now mark the spot where a steep chunk of the lakeshore washed away this spring.

In one spot, the damage has cut far enough inland to eat into a gravel access road that runs along the edge of the cemetery.

“I know a lot of people that go out there don’t drive on it,” Swift said.

Fricke said there was another place, toward the south end of the cemetery property, where erosion could possibly threaten graves if it is allowed to continue.

“If (the lake level) stays this high, it continues,” Fricke said.

The cemetery association is currently working with Lyon County to help cover the cost to stabilize the lakeshore near the cemetery.

Lakeside Cemetery is located on a hill overlooking the west side of Lake Yankton in Balaton. It’s a public cemetery, unaffiliated with a church, Swift said. Some of the grave sites date back to the late 1800s.

Lyon County Soil and Water Administrator John Biren estimated that about 900 feet of lakeshore is owned by the cemetery. “That’s a substantial reach,” he said. Besides the size of the property, there’s a lot at stake if erosion of the lakeshore continues.

Fricke said it hasn’t gotten to the point where graves at Lakeside Cemetery are in danger. However, Fricke said one family was aware of the erosion near a grave site in the southern part of the cemetery, and he had offered new burial plots to a couple who bought plots in the south corner three years ago.

One of the challenges of slowing or stopping the erosion at the cemetery is cost. Fricke said stabilizing the lakeshore was doable, but it would take money out of the cemetery’s perpetual care account.

Swift said the Lakeside Cemetery Association is trying to take a proactive approach to stopping the erosion. The association has turned to Lyon County for help with stabilizing the lakeshore. Swift and Biren went before the Lyon County Board on Nov. 5, to ask for support to go ahead with engineering work needed to provide cost estimates.

Biren said county staff had requested engineering assistance from the Southwest Prairie Technical Service Area. He also thought the county could use some of its buffer enforcement funds to help pay for the project.

With the county’s support, engineers could do surveying and design work, that would give the county a better idea of what stabilizing the lakeshore would cost. Biren said the estimates would come back before the board in the future.

“We were pleased they were on board with doing something,” Swift said.

The cemetery isn’t the only property that’s been affected by high water and erosion. Fricke said property owners around the lake have lost docks and decks, and Swift said Knudson-Bosley Memorial Park, located on the lakeshore by U.S. Highway 14, has also been impacted by flooding.

Water levels at Lake Yankton have changed since the 1990s, Fricke said. When the lake fills up during major weather events, it doesn’t drain like it used to. “Now it seems to be going down slower and slower,” he said. Major rains over the past couple of years haven’t helped either.

Stores focus on cleaning to get shoppers back to spending