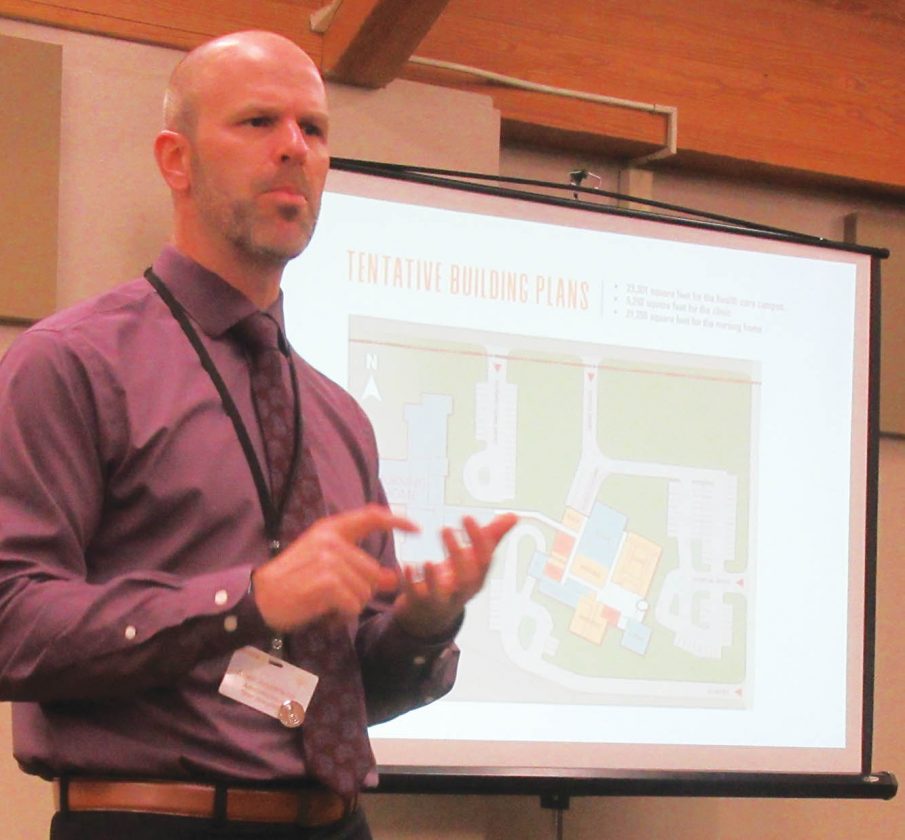 Phot by Deb Gau Avera Tyler administrator Allan Anderson went over hospital statistics and a tentative building layout for a new hospital and nursing home in Tyler. The project will need to be approved by Avera Health before officials can proceed with steps like acquiring land.

TYLER — Avera Tyler officials are making the case for building new hospital and nursing home facilities in their community — and talking with local residents was an important part of the process, they said.

As they met with about a dozen Tyler community members on Thursday night, Avera Tyler administrator Allan Anderson and Avera Tyler Foundation executive director Abby Ahmann said questions were welcome. Each question they were able to answer about a tentative hospital proposal would help, as they work to determine the feasibility of the project, Ahmann said.

“We believe now is the right time to be doing this,” Anderson said. Tyler’s current hospital building is 61 years old, and not efficiently set up for the kind of care Avera Tyler provides most often, Anderson said. “It’s a very old facility, in terms of health care.”

Before a new hospital building project can become a reality, Avera Tyler will need to go through an approval process with the Avera Health system. But Ahmann said Avera has shown support for investing in rural health care.

Ahmann said Avera Tyler held a series of small group meetings to talk about the hospital and nursing home proposal, before opening it up to town hall-style community meetings on Wednesday and Thursday.

Ahmann said the projected cost to build the new facilities totaled about $32.3 million.

“This number is bricks and mortar, and furnishings,” Ahmann said. Currently, the proposal would be for Avera to invest $25 million in funding, with $7 million coming from community giving. However, Ahmann said, “That’s just a bookmark,” based on philanthropy best practices. Avera Tyler is working with a consultant to develop a business plan and funding proposal as part of the feasibility process, she said.

“We are in a very old building, running on a very old system,” Anderson said. “The last major addition to the facility was in 1999.”

The current hospital is a 20-bed facility, but there’s not that much need for inpatient care, Anderson said. Avera Tyler averages 10 hospital admissions a month, compared to 573 clinic visits a month. In the past couple of years, Anderson said, the most patients checked into the hospital at once was eight, in the middle of a bad influenza season.

While the hospital’s clinic, specialists and outreach providers do see plenty of patients, the existing facilities aren’t arranged efficiently, Anderson said. They also have issues with accessibility, security and space.

While there isn’t an approved building project for Avera Tyler yet, Anderson said there is a potential for a new hospital and long-term care facility to be built on land south of the new Russell-Tyler-Ruthton school that started construction in Tyler. He and Ahmann shared a tentative building layout.

The new hospital would also have a larger emergency department, and more space for physical therapy, Anderson said.

The proposed new layout for Avera Tyler’s nursing home would include 30 private rooms. Anderson said that wouldn’t change the current number of beds at the facility, but it would give residents privacy.

Audience members asked how Avera Tyler could keep its nursing home open, after two area nursing homes closed in the past year.

“Our nursing home remains full,” Anderson said. The difference for Avera Tyler’s long-term care facility was that it wasn’t a standalone nursing home, he said.

A more detailed proposal and business plan for the building project would go before the hospital governing board and then the Avera system for approval. If the proposal gets the green light, then Avera Tyler can get into the process of negotiating land acquisition, Ahmann said.

Even if the proposal isn’t approved, Anderson said Avera Tyler will keep working on a plan to update its facilities. “We’re not going to rest on that, either,” he said.