Author explores why they voted for Donald Trump 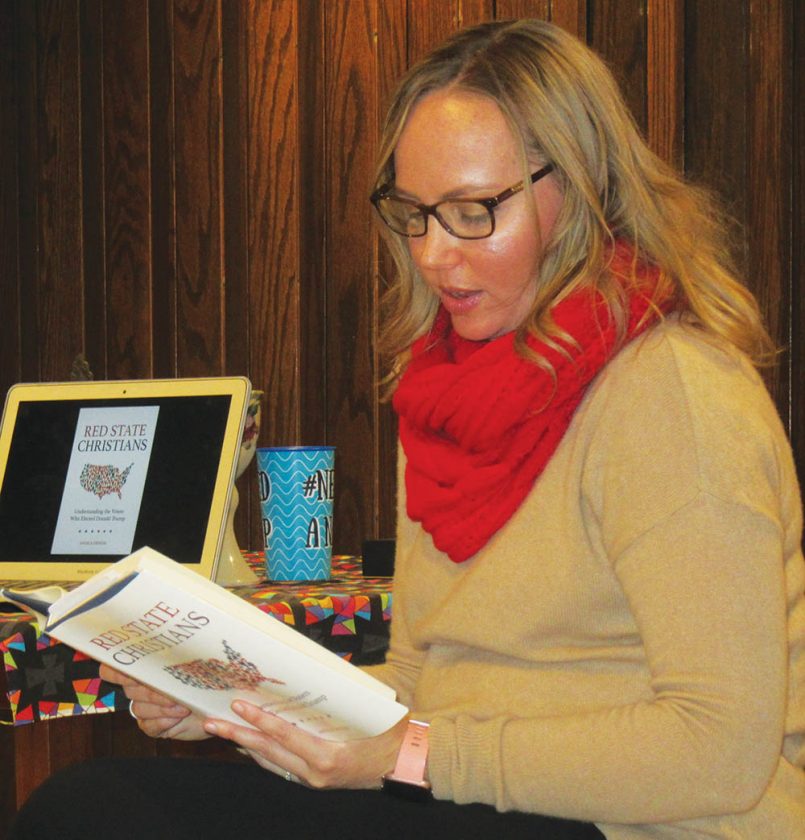 MARSHALL — When the Rev. Angela Denker was a pastor at a church in Orange County, California, she observed a change in the mindset of many people — Christians were becoming more nationalist-oriented rather than Christ-centered.

Denker, a former sportswriter turned pastor, spent the past year traveling the nation and interviewing Christians on why they voted for Donald Trump. She has written a book, “Red State Christians: Understanding the Voters Who Elected Donald Trump.”

Now living in Minneapolis with her husband and two sons, Denker traveled to Marshall Nov. 7 to give a talk at the Campus Religious Center at Southwest Minnesota State University. She was invited by Jeffrey Greathouse, Lutheran campus ministry chaplain. About 25 people filled the room at the CRC.

In her book, Denker focuses on the spiritual aspects of the people she met on her travels more than politics, but her publisher said books sell better if “Donald Trump” is in the title.

Denker said the No. 1 question she gets asked about the book at events is “Is it pro-Trump or anti-Trump?” She said the book is neither.

She said that question epitomizes the current national discourse.

“So much is focused on just one person or how you voted in 2016,” she said. “It makes conversation in churches, in schools, in families, really difficult sometimes.”

She said the book is about more than just one person, it’s “about America and understanding who we are as Americans, who we are as Christians and what Jesus might think about all this.”

The church that she worked in was in a suburb called Yorba Linda, next door to the Richard Nixon Library. Nixon is considered a favorite son there, she said.

The church that she worked in, she said, was Lutheran, but “operated more like an Evangelical mega-church.”

The church reflected the community.

“The people had incredible wealth and there was a huge emphasis on how you looked and plastic surgery,” she said.

“It was so really interesting to see how things coexist together — conservative Christianity, but also wealth, pop culture, appearance and what I started to notice into the run-up of the 2016 election, not only in my own congregation in Orange County, but other churches, these trends that came out of Southern California Christianity, you could sort of see them in the embrace of Donald Trump.”

Denker observed that the place where she was at was helping her understand national politics.

In 2016, Orange County for the first time since 1932 voted Democrat because the county was getting more diverse — Asian, Hispanic — those voters drove the county to turn blue, “but the white Evangelical voters remained largely conservative,” she said.

“Politics became a lot more personal for a lot of people. Whether you were an Obama voter or for the Republican party, that became an important part of people’s identities in a way that it hadn’t been in the past. And Trump made that even stronger for some people, especially when he latched on to Hillary Clinton’s comment about deplorables, it became a badge of honor.

“Being a Trump supporter became a really important part of people’s identity. It made it really difficult to have relationships across party lines. In my church, people who had been friends for decades, all of a sudden didn’t want to sit together and have coffee after church anymore.”

It happened within families as well she found. She said political beliefs became more important than their identities as a Christian.

Denker said she wanted to limit her book to Yorba Linda politics, but her editor wanted her to open up the book nationally, “so I spent a year traveling all across the country.”

Denker’s travels took her to Appalachia and the U.S.-Mexico border, but first she went to the March for Life in Washington, D.C. in 2018, which was largely attended by Catholics and Evangelicals. She attended the Southern Baptist convention where there is a “huge debate within the convention whether to continue to be deeply conservative or whether they want to be a little more progressive.”

In the book, she notes the diversity within groups.

“You can’t paint all Baptists or all Evangelicals with a broad brush,” she said. “People are wanting to do different things.”

She learned from a pastor about Christian nationalism, the idea that conflates worshipping God with being a proud American.

“It came out of wanting to honor military veterans,” she said. “That America was distinct, a Christian nation, apart from the atheist Soviet Union. But it has come to the point where people learn patriotism more than they learn about the story of Jesus. The high holidays aren’t Easter or Christmas anymore, but Memorial Day, Sept. 11, Veterans Day and the Fourth of July.”

Denker’s book, “Red State Christians: Meet the Voters who elected Donald Trump,” was released on Aug. 6 by Fortress Press. It is available for sale at Treasured Times in Marshall, Amazon and Barnes and Noble.