Light Up the Night kicked off with annual lighted parade 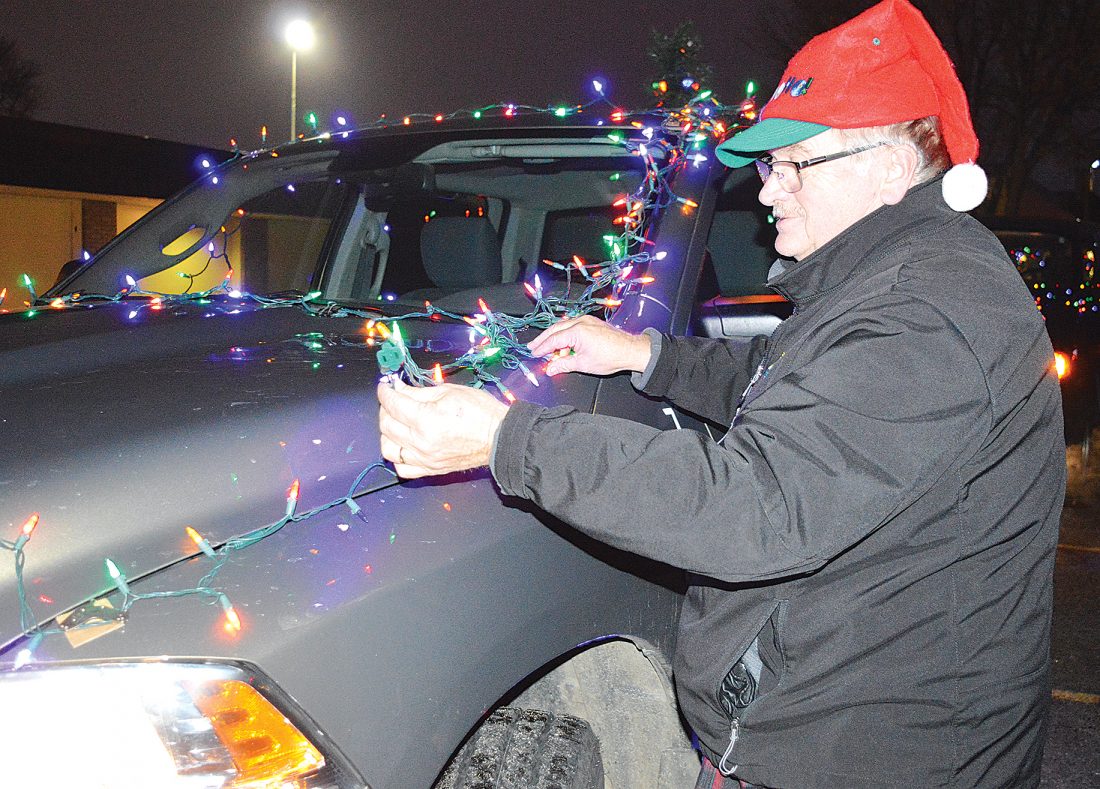 Photo by Deb Gau For many entries, getting ready for the Light Up the Night parade meant putting some final adjustments on strings of Christmas lights. Lyon County Commissioner Gary Crowley made sure the county’s float was ready to head down Main Street.

MARSHALL — They were ready for the cold, all bundled up in their hockey gear. But there were still some finishing touches before Isabelle Deutz, Aubree Metheny and Grace Bump could climb aboard a flatbed parked not far from Main Street. Deutz stood still as strands of lights were wrapped around her body.

“Last year we had Christmas lights,” said Abbey Foley, who was already wearing strings of multicolored lights. This time around, they were using smaller strings of remote-controlled LED lights. When Deutz and the other girls were finished, they’d twinkle right along with the Marshall Amateur Hockey Association’s parade float.

It was all about the sparkle during the Light Up the Night parade on Friday evening. A total of 28 units decked out in Christmas lights and decorations traveled down main street, all the way to East Lyon Street and Independence Park.

The parade was the big kick-off for Light Up the Night, the holiday event hosted by Prairie Home Hospice and Community Care. Once the parade reached the park, there would be a fireworks display, and music by Kayla Daniels. Light Up the Night will continue at the park every Friday, Saturday and Sunday in December.

Participants getting ready to march in the parade Friday said the event was fun, but they were also excited to help support Prairie Home Hospice.

“It’s very passionate for our employees. It’s why we’ve participated for the last couple of years,” said Lori Folk. Folk was one of a group of people from Archer Daniels Midland in Marshall, who were getting their parade float ready to go, and adding extra lights for a better effect.

This year’s parade drew some newcomers as well. As the lineup was getting started, Lyon County Commissioner Gary Crowley was busy fixing a strand of lights on a county pickup truck. The float was helping to spread the word about Lyon County’s upcoming 150th anniversary celebration.

“I came to the parade last year and really enjoyed it,” Crowley said. So, he got the idea of entering a float to represent the county. Lyon County Museum Director Jennifer Andries was the main person behind the theme and decorations, he said.

Not far from where Crowley was fixing the lights on the county pickup, Annie Magnuson was getting ready to lead her pony, Paint, down Main Street in the parade. Magnuson said Paint wasn’t a stranger to parades, but this would be her first lighted parade.

“Thankfully, she took it like a champ,” Magnuson said.

To go along with the festive theme, Paint was wearing a lighted wreath, and pulling a small sled with a Christmas tree on top.

Magnuson’s mother Amy Magnuson said they saw the first Light Up the Night parade without knowing what was going on, and thought it looked like fun.

“Last year we caught the parade,” Magnuson said. “We walked downtown, and saw all the people there.”