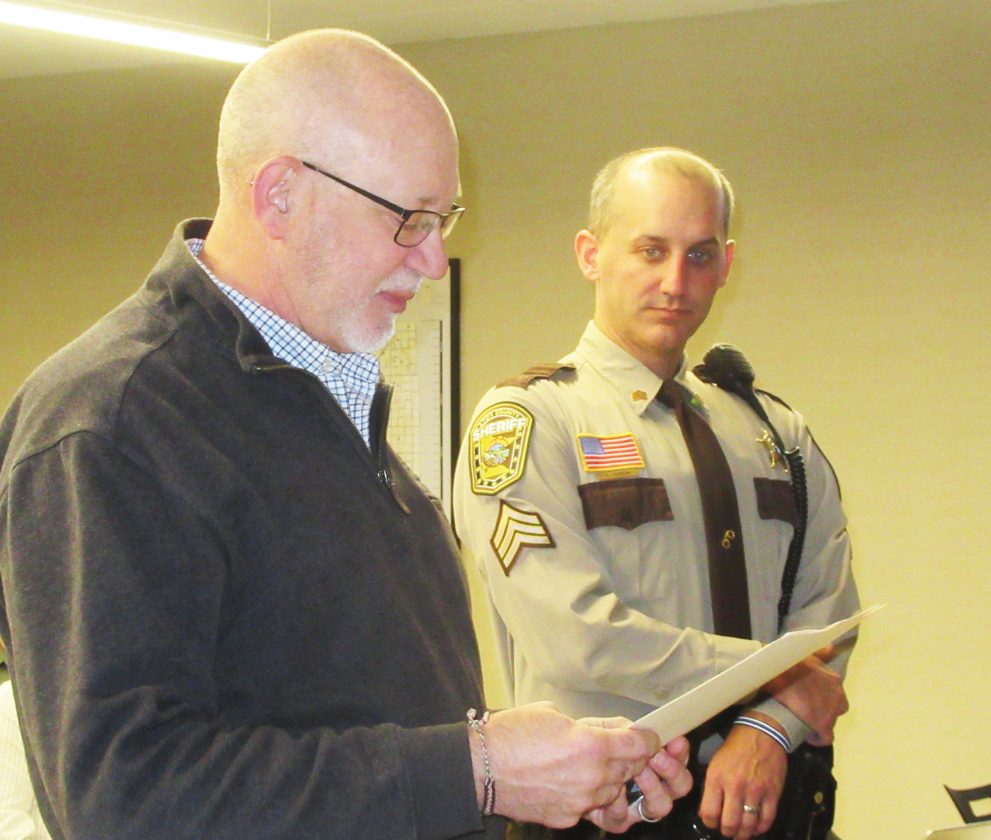 Photo by Deb Gau Scott McConkey, of the state Office of Traffic Safety, at left, presented Sgt. Adam Connor of the Lyon County Sheriff’s Office with a Challenge Coin Award on Tuesday. The award recognizes Connor’s work in helping organize traffic safety events on the U.S. Highway 14 corridor. In July, Minnesota law enforcement agencies did extra traffic enforcement on Highway 14, all the way from the South Dakota to the Wisconsin borders.

MARSHALL — Doing some basic things can help make a life-or-death difference when you’re traveling on the highway, said Sgt. Adam Connor of the Lyon County Sheriff’s Office. He listed them off: following the speed limit, wearing a seatbelt, and having a sober driver.

Having law enforcement out on the road can also help remind motorists to do those things. That’s been the idea behind special traffic enforcement events along U.S. Highway 14 over the past few years. In 2018 and 2019, agencies all across Minnesota did extra traffic enforcement as part of a new “border to border” safety event.

The events have been successful enough that they’ve caught some national attention, said Scott McConkey of the Minnesota Department of Public Safety’s Office of Traffic Safety. And on Tuesday, McConkey was in Marshall to recognize Connor for his leadership in planning them.

Connor was presented with a Challenge Coin Award, which recognizes traffic safety work that goes above and beyond normal efforts.

Connor said he saw the honor more as something that went to the whole Lyon County Sheriff’s Department, and all the departments that took part in the extra enforcement.

“We have great guys who do great work,” Connor said.

McConkey said the border-to-border enforcement events grew as part of Minnesota’s Toward Zero Deaths program. TZD’s goal is to reduce the number of traffic fatalities on Minnesota roads.

“The goal was to make the road safe,” he said of extra traffic enforcement on Highway 14.

The events started out focusing on Highway 14 between the South Dakota border and New Ulm. In 2017, the participating area stretched from South Dakota to Mankato. The first full border-to-border extra enforcement event was held last year. Each time, law enforcement also advertised that there would be increased traffic enforcement, to help remind people to drive safely, Connor said.

This year, the extra enforcement was done on July 3.

“It worked out perfectly,” Connor said. By having extra traffic enforcement toward the start of a holiday weekend, when there are more people on the roads, “It sets the tone for the whole weekend.”

“It kid of reinforces with people to make better decisions,” like driving sober and wearing seatbelts, he said.

Connor said there’s a possibility the border-to-border enforcement event along Highway 14 could grow in 2020. Law enforcement agencies in both South Dakota and Wisconsin had expressed an interest in participating in next summer’s event.

Connor said it was good “to see something we started out here growing into something bigger.”