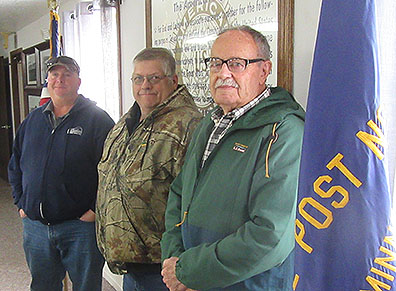 LAKE BENTON — Legion and VFW clubs all across America have been closing their doors in recent years, but Lake Benton’s Legion members chose to defy the trend.

After deciding to sell their former club to the city for use as an events center, post members felt a greater than expected sense of loss by not having a place to gather. Fortunately they had a good option since the city’s former community center was still available to be purchased.

“It wasn’t planned to happen this way,” said Lake Benton Mayor Bob Worth, who is also the vice commander of the Legion Post. “As a city, we put the building up for sale and advertised it with a higher asking price. When there were several inquiries but no offers, the sale to the Legion post came up as an alternative.”

After discussions, city officials and Legion officers agreed to a purchase price of $27,500. Besides providing an ideal purpose for the former community center, the agreement solved the issue of how to manage the veterans memorial which was placed in front of the building in 1989 a decade after the community center was built.

A sale to anyone other than the Legion would have required either moving the monument, demolishing it, or placing a covenant on the property to require that it remain in place.

The third option was an obstacle to selling the property. Had it been sold with a covenant, the city would most likely have had to keep paying for insurance on the monument and might have had to take responsibility for landscaping and snow removal.

“It was a good deal for everybody, both the Legion post and the city,” said Lake Benton Legion officer Don Evers. “Everyone’s happy with it. The Legion has a clubhouse again, and the city succeeded in getting it onto the tax rolls.”

Legion members successfully obtained a grant from First Security Bank in Lake Benton that covered a third of the purchase cost. Some of the rest was raised through donations from both members and non-members, while a final portion was taken from what the post attained when it sold its former building.

Lake Benton Legion officer Tony Dunn said that in the interim time period Legion members held their meetings at the chalet building at Hole in the Mountain County Park on the west edge of the city. Their memorabilia was placed in storage at several different garages.

“It just wasn’t the same,” Dunn said. “Right away we saw how we were starting to lose our identity and our sense of camaraderie. We needed a home.”

Since they moved into the building in August, club members have organized some exterior painting and received permission from the neighboring building owner to hang a sign on an adjacent outer wall which states that all veterans gave to their country and that some gave their lives. The sign was donated by the Alan and Kathy Johnson family of Lake Benton.

The post will have its Veterans Day veterans supper at the club today evening. It’s one of three observances planned in Lake Benton, along with a flag placement at Memorial Hill Cemetery and a program at the K-6 elementary school which will feature Lincoln County Veterans Services Officer John Hovland as the speaker.

The club building is available to be rented for events attended by up to 60 people. Three events have taken place thus far, and inquiries for 2020 include several for high school graduation receptions.

Another benefit has been a surge in the number of active Lake Benton Legion members. It had fallen to five, but now stands at more than 10.

“It’s given us a whole different attitude,” Worth said. “We’re excited about the building, and we’ve been talking about a lot of different things we could accomplish.”

The post is named after Henry Sollie, who was the Lake Benton area’s first casualty in World War I. It was founded in 1946 and bears the name American Legion Post 10 as the tenth out of hundreds of Legion posts that were established in Minnesota.

Fifteen charter members started Lake Benton’s post. Membership grew to about 200 and still stands at 88, but a large share of the members live in distant locations.

“Their roots in the Lake Benton and Verdi area are part of what keeps us going,” Evers said. “They maybe haven’t lived here for more than a generation, but they still identify with us. We’re one of the ways they keep their local ties.”

He said Lake Benton and other Legion posts still have hopes to expand. Members of the “Greatest Generation” who served in World War II and the Korean War and who’ve been Legion members from almost the very beginning still reach out to young veterans to encourage them to become part of their ongoing mission.

A highlight for Lake Benton’s post for 2019 was gaining a new member who also joined the firing squad. The squad no longer has an abundance of younger veterans available who can march at events in place of older ones who retire.

“We really want young people to join us,” Evers said. “They have busy lives with work and with children, but anything they can do is appreciated. It’s all about remembering our military service, and giving each other friendship and support.”