It was the first year in a new location for Marshall’s community Thanksgiving. But even with the change, the meal still drew many people. 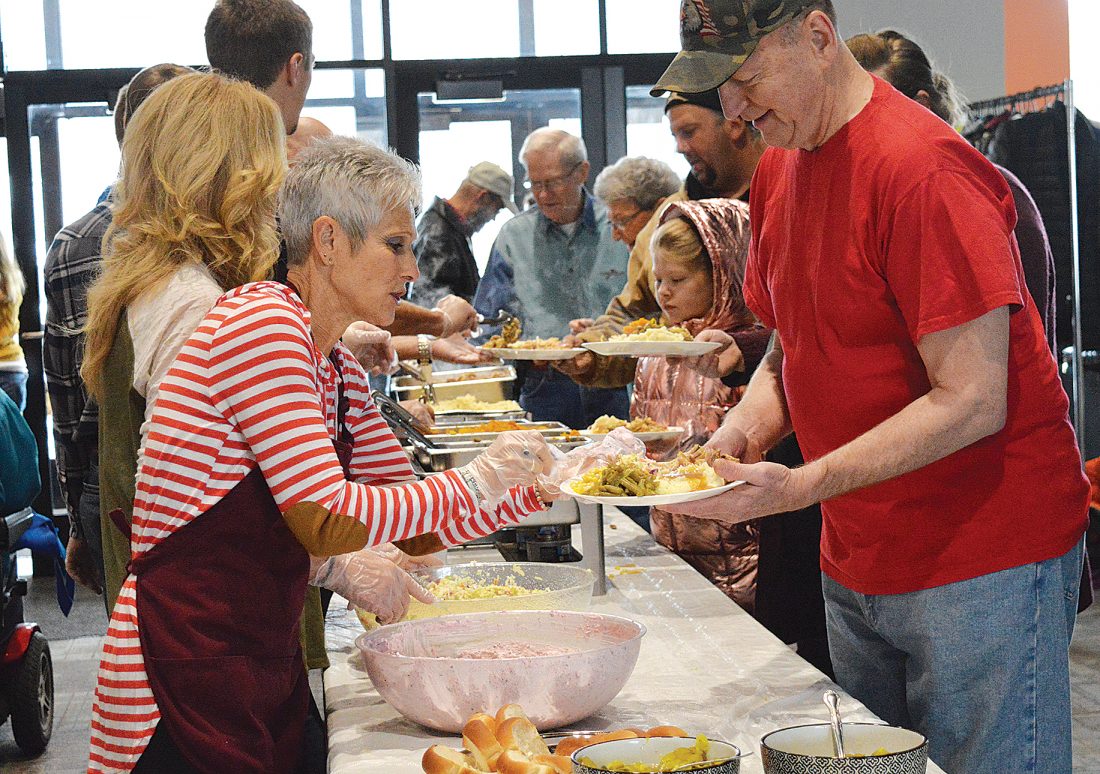 Photo by Deb Gau A crew of area volunteers, including Jo Schroepfer, helped serve Marshall’s community Thanksgiving meal on Thursday afternoon. This year, the event moved to Grace Life Church, at the former East Side Elementary. In spite of the venue change, volunteers still served hundreds of meals.

MARSHALL — Thursday marked a big change for Marshall’s community Thanksgiving meal. The event moved from the National Guard Armory, where it had been held for years, to Grace Life Church, at the former East Side Elementary campus. But although the venue had changed, the tradition hadn’t.

Inside the church, people from the Marshall area and all around the country sat down to a turkey dinner served by friendly volunteers.

“The food was great, and the people are wonderful,” said Susan Nienaber. Nienaber was among the Marshall residents who shared Thanksgiving at the church on Thursday afternoon.

The Thanksgiving meal was served inside Grace Life’s new worship and gathering space, which was built earlier this year. The rows of chairs for the congregation had been put away and replaced with dining tables, while images of a crackling fireplace played on a giant projector screen.

“We wanted it to be as homey as possible,” said the Rev. Doug Wing, senior pastor at Grace Life. Having Thanksgiving at the church offered “a little more of a family atmosphere,” as well as a commercial kitchen at the school for preparing the food, Wing said.

“The biggest adjustment is the logistics,” said Terri Hively, one of the organizers of the meal. Volunteers made frequent trips back and forth between the kitchen and the church, carrying takeout orders and fresh batches of hot turkey, stuffing and potatoes.

“One of the great things about this, is we always have more volunteers than we know what to do with,” Wing said. In addition to church members and Marshall area residents, Wing said Western Print Group and Turkey Valley Farms also helped the event.

Some of the preparations, like getting the tables set up, started early in the week, Wing said. “The weather made everyone a little nervous, not knowing what it was going to be.”

Even with snowy and icy weather this week, there was a good-sized crowd of people enjoying the community meal. In addition, Hively estimated they had received over 300 takeout and delivery meal orders.

The weather did factor in to some people’s decisions to attend. Addy and Larry VanMoer said they had some guests who couldn’t make the trip from South Dakota to Marshall for Thanksgiving, so they decided to go to the community meal instead of cooking.

“This was easier, and it takes the stress off,” Addy VanMoer said. Besides good food, she said, “It’s good to see new people.”

Other people in attendance ranged from people visiting family in the Marshall area, to people who come to the community meal every year. Some of the volunteers helping to serve the food included a group of Federal Emergency Management Agency employees who were working in southwestern Minnesota. Tom Narey, one of the FEMA workers, said they had heard about the community Thanksgiving and spread the word around the office to take part.