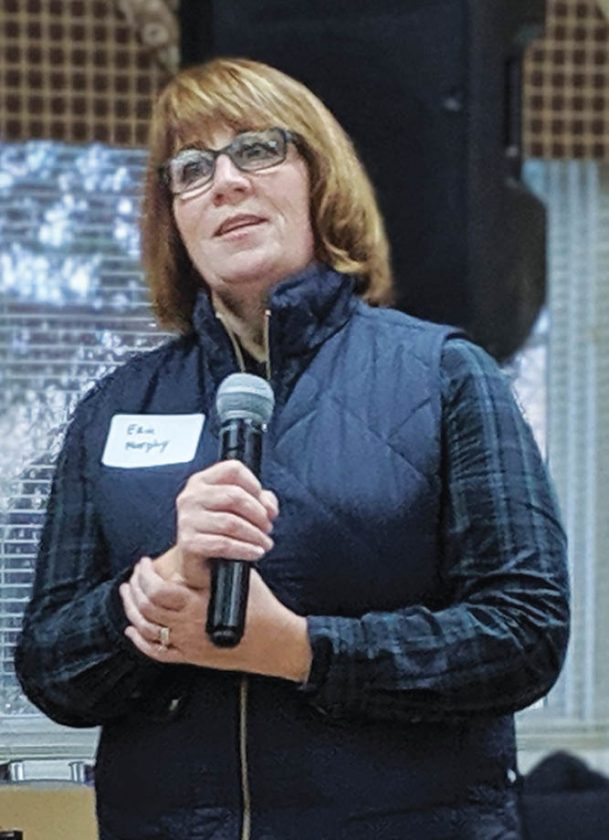 MARSHALL — It was all about pie, ice cream and health care inside the Marshall Community Center on Sunday during the Lyon County Democratic-Farmer-Labor Party gathering Sunday that featured guest speaker Erin Murphy.

When asked about her position on health care, the 2018 Democratic gubernatorial candidate told the audience she believes Minnesotans and people across the nation are ready for change in the present system.

“I support buying into Minnesota Care here in the state of Minnesota. I actually think we are going to make more progress in the state. I want a public plan. I want to get rid of the bureaucracy that is getting in the way of people getting care,” she said.

“Because of my background in nursing, I support Medicare for all,” Murphy said. “I’m a single payer supporter.”

Murphy lost her bid to represent the DFL in the 2018 governor’s race to Tim Walz, who also defeated Republican Jeff Johnson in the general election. Murphy is currently running for the Minnesota Senate in District 64 for the upcoming 2020 election.

The event also featured a variety of pies, live music and a silent auction. Lyon County DFL Chairperson Anita Gaul who also introduced Mindy Kimmel and Matt Ruble to speak. Kimmel is from New Ulm and is a candidate for Minnesota House District 16B, while Matt Ruble is working on U.S. Sen. Amy Klobuchar’s presidential campaign in southwest Minnesota.

“One of the things we see on the national level is the discussion on health care. We also see it on the local level. Health care is one of the most involved parts of our lives,” Kruse said. “If you are a farmer, you hear stories from farmers paying $30,000 a year for a $10,000 deductible policy and they can’t afford to see a doctor.

“We’ve got people locally who can’t afford to see a doctor, can’t afford insulin. We have people dying because of the spike in price in insulin. Health care affects each and every one of us.”

Kruse encouraged people to check out MNsure to see what subsidies they might qualify for. MNsure is the health insurance marketplace for Minnesota. The exchange allows people and small businesses to purchase health insurance at federally subsidized rates.

“There is a lot of misinformation out there about MNsure on what it can and can’t do. Please, if you have people struggling with health care, steer them to MNsure. Have them go online and see what they qualify for with MNsure,” he said.

Murphy was critical of the large health care companies and the networks they have built.

“I don’t think they are thinking about the community as much as they are thinking how they are working their business model,” she said. “The decisions that are being made now are driven way more by how we meet the bottom line, how do we make a profit off the system and how we manage the competition with our hospitals in other parts of the state and metro area. And we pay the price for that in my perspective.”

Murphy shared stories of people across the nation sharing insulin on a black market because they can’t afford to buy it from the pharmacy.

“If you are insulin dependent, and you don’t have insulin, you don’t stay alive. So there’s a network that has been created,” she said. Having to share insulin on the black market in the United States “doesn’t make sense to me,” she added.

Murphy said the nation has been polarized over health care ever since the passage of the Affordable Health Care act.

“I remember after the passage of the Affordable Health Care Act talking with a physician who was a state representative in Wyoming and he was opposed to the Affordable Care Act,” she said. “He thought the state should secede from the union. ‘You won’t force us to cover people with medical assistance,’ he said.

“I never heard words like that for a policy that was meant to extend health care to people, but that was the line that was drawn with the Affordable Health Care Act. We really have been stuck since then.”

She also said while some people are ready to take steps toward public coverage, others want the status quo and “they are ready to fight and those are the lines in which we are fighting right now.”

Murphy encouraged the audience to use the stories of people they know who can’t afford insurance and are not getting it.

“We are hearing it from our own candidates who are having to debate on whether or not we should stay with the current system or move to a public system,” she said. “I think before we can make that argument, we have to close our eyes and remember the people who are living all over the state of Minnesota and all over the country who are going without care because they can’t afford it. We have to put them back in the center of our stories, because that’s what moves us.”