Farmers waiting for that ‘happy mix’ to harvest 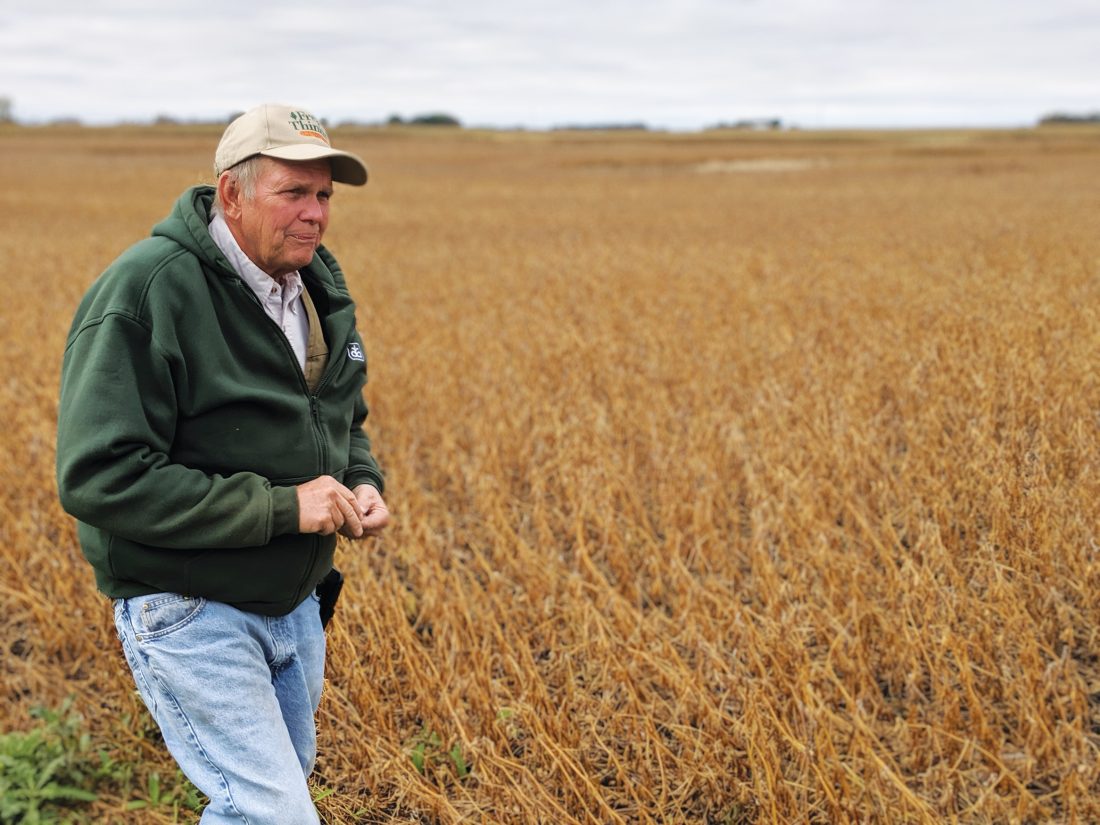 CLARKFIELD — Doug Albin reached down along the edge of his soybean field and snapped off two pods from a plant.

The Clarkfield area farmer then stood up and broke open the pods, revealing six yellowish beans, popping one in his mouth.

After chewing on it for awhile, he looked up.

“Not quite ready,” he said. “Maybe by Saturday.”

Albin was walking through the soybeans in a field in front of farm house on Wednesday. After checking with the weather forecast that called for sunny days ahead, Albin projected harvest day would be today for the beans. Later for the corn.

He continued to check the beans right up to the weekend.

“We will actually walk out and take a few pods out and snap them open. Take a bite out of the bean. If it’s soft, it’s too wet, if it feels like it’s going to break your teeth, you probably should have been out combining. That’s kind of the way you test it,” Albin said. “Then of course you have areas in the field that are wetter or drier than others. And so you kind of have to determine where that happy mix is at.”

Farmers throughout southwest Minnesota are in the same situation when it comes to find that happy mix.

Brian Velde, who farms soybeans and corn in the Wood Lake area, said the harvest was just starting for him this week. Wet conditions this spring meant that his crops were planted later than usual — two or three weeks later than average for corn, and about a month later than usual for soybeans, Velde said.

“The biggest challenge right now is the corn is wet,” with moisture levels around 28-30%, he said. Getting rid of that extra moisture would take more drying, Velde said. “It’s a big financial cost.”

All the farmers are facing late harvests this year because of the late start in planting.

Albin said he didn’t get his corn planted until the end of May. In normal years, he would plant in the end of April. His beans were planted in June.

“We went to shorter hybrids on the corn and kept the same maturity on beans because they are not quite as sensitive to dates as they are to sunlight. We ended up switching to earlier maturities on corn and the people I have been talking to, the corn right now is running from 22% (moisture) to probably 32% and we are behind.” he said.

“Typically this time of year, we should be taking corn around 20-24% and beans — they will vary.”

Albin said the farmers he has talked to are seeing their beans at 18% when they should be at 13%.

“There is significant dockage at the elevator if you take them out too wet, because they don’t want to keep wet beans. Some of the farmers are forced to put them into aeration bins and they are hoping we get some nice weather to take a little bit of moisture out of there. Get about 13 or 13½ (%) so you can keep them over the winter. And of course, the corn we will take and dry all that. We will spend the money on the LP — the dryer fuel — and we will take that to dry it down to 15% and hopefully we will get a decent crop,” Albin said.

He blames the high moisture percentages on the rain.

“We appreciate the rain most years, but this year it seemed like it rain on fairly regular basis. And when it’s raining out and your ground is saturated already, it really doesn’t help that plant,” he said.

Albin farms about 1,300 acres a year on his different field locations. But this year he has about 350 acres that he didn’t plant for production. In a field he can see from his kitchen window, he planted 75 acres of radishes and turnips that he is using for a cover crop. The field is located along a creek that overflowed, making it too wet for growing soybeans or corn. So he will see no income from that field.

Unfortunately, too much rain followed the late start in planting, according to Albin.

“My operation is down 25% from what I should have planted,” he said.

Albin said most farmers are ready to put 2019 behind them and start planning for 2020.

“This year has been quite a challenge,” he said.

— Deb Gau contributed to this report