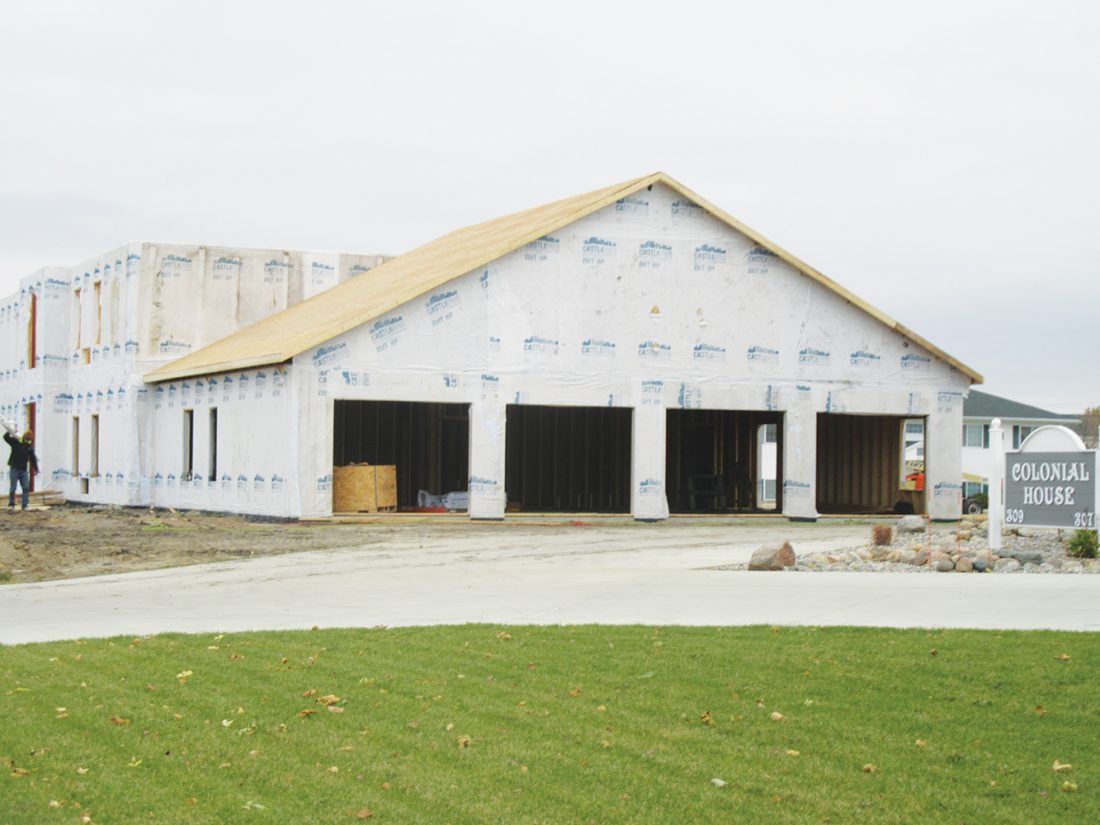 Photo by Karin Elton A new nine-plex apartment building is being constructed on Stephen Avenue off Fourth Street.

MARSHALL — Last year’s Marshall Economic Development Project bus tour was so well-received, the planners decided to do it again. Three tours were almost fully booked for Monday’s event. The chartered bus was at capacity at about 40 people for each tour.

The hour-long bus tour of past, current and future projects in Marshall was sponsored by the Marshall Economic Development Authority and Marshall Area Transportation Group. The tours were emceed by Tara Onken and Stacy Frost with interjections by Sharon Hanson, the city administrator. Onken is the EDA director and Frost is on the EDA board.

Frost said the EDA meets once a month and is a referral group to the city council.

The bus tooled around Marshall, starting on West College Drive where Onken pointed out Downtown DD, which relocated last spring to College Drive in the old Len’s Southside Sinclair after being situated on Main Street and College Drive. Downtown DD (Designated Driver) occupied a building in the area down the street of Varsity Pub known as Block 11 to city officials.

Frost mentioned one of the incentive programs available for businesses is facade improvement.

“We’ll loan you some money if you are going to update the front of your property,” she said. “It’s really a joy to see applications come in and see the different businesses that really want to improve and that improves our whole community.”

Onken added that one of the businesses set for facade improvement is Mike Henle’s building on 208 W. Main.

Block 11 buildings are scheduled for demolition and a developer is working with the city of Marshall on a commercial building with apartments on the second floor.

Traveling past the former County Fair building, Onken remarked that it is still available for redevelopment.

“The building itself is a great example of how retail has changed over time,” she said.

Turning onto Saratoga Street, Frost told the passengers where the new school building on the property of the Marshall Middle School will be built.

“The new second through fourth-grade addition will be built on the south side of Marshall Middle School,” she said. “The second through eighth grade will be on one plot of land by the library. Park Side is shifting from pre-K to second to Early Childhood to first grade. It will be exciting to see construction to start in the spring of 2020.”

Onken said West Side Elementary School is scheduled to be demolished, so “that’s another site that will be repurposed or redeveloped in the years to come.”

Swinging down Fourth Street near Minnesota Highway 23 on Elizabeth Street, Onken said the “spec houses” have had a really good response in sales. There is a demand for home ownership. There is a ton of new property and a ton of new developments.”

Onken said it’s important to have sufficient housing in Marshall as far as site selection for businesses.

“You can find the perfect site, but if you don’t have the workforce it makes things difficult or if you have the workforce, where are you going to live?” she said. “So housing is a major piece of the puzzle when it comes to economic development so it’s great to see the growth of single family homes over the last couple of years.”

“Nothing makes us happier than to see excavators and backhoes around Marshall,” she said.

Off Fourth Street by Stephen Avenue near St. Stephen Lutheran Church is the Colonial house which is “an 11-plex, which has a set of shared garages and adjacent to that is a nine-plex that’s going up,” Onken said. “Those are efficiency units.”

In addition to new housing developments, the bus drove past the various businesses that have expanded recently including Harrison Trucking, Action TrackChair and Marshall Machine Shop. The passengers were also shown where the new HeadStart building is under construction near the United Community Action Partnership building on Minnesota Highway 23.