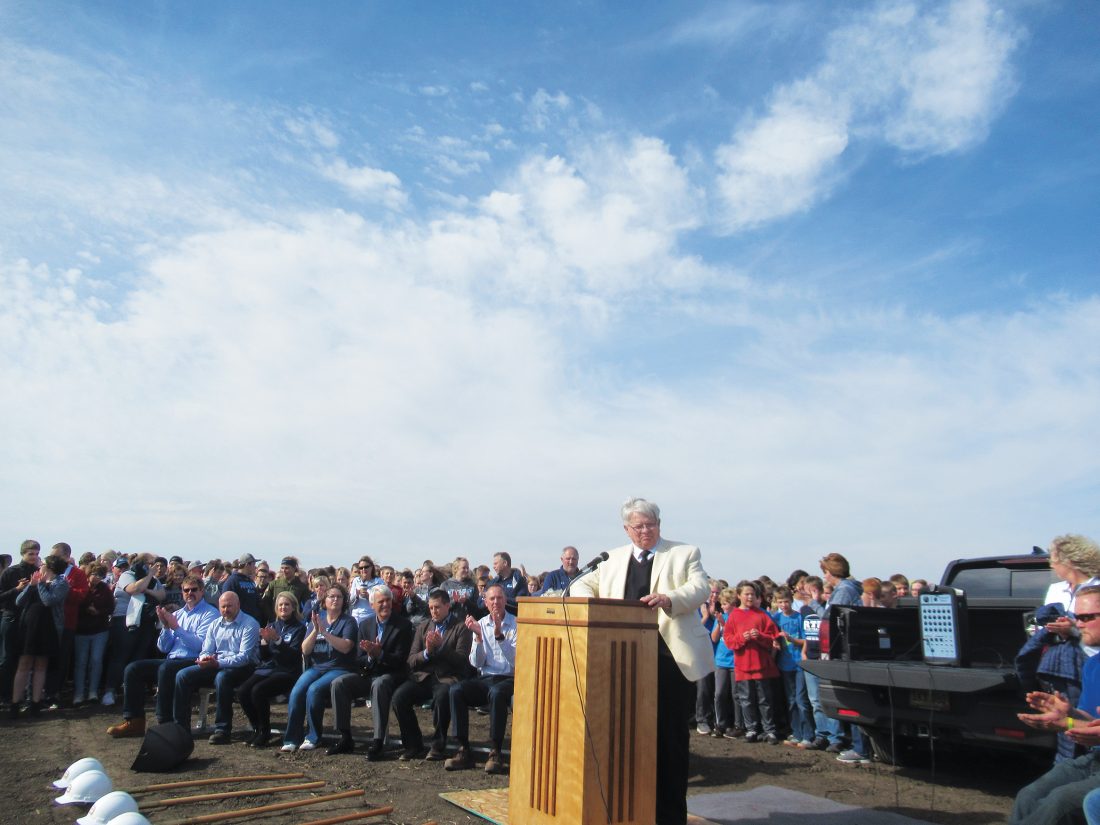 Photo by Jim Muchlinski Russell-Tyler-Ruthton Superintendent Dave Marlette led Wednesday’s groundbreaking ceremony at the K-12 school site along Lincoln County Road 8 in Tyler. He was flanked by officials who played key roles in the project and by a crowd of school staff, students and public supporters.

TYLER — Students, staff and supporters celebrated many months of planning for the future of the Russell-Tyler-Ruthton School District Wednesday afternoon, and the groundbreaking they attended is just the beginning.

A crowd of about 300 people gathered in the middle of a farm field on the west edge of Tyler to officially break ground for the new RTR K-12 campus. Construction vehicles rolled along in the background as buses filled with students pulled up alongside Lincoln County Road 8.

Once everyone was assembled, officials spoke about how a wide range of people pulled together to make the new soon-to-be-built RTR school transform from an idea into a reality.

“A lot of people worked very hard for this,” RTR Superintendent Dave Marlette said. “We really appreciate it. Our new school never would have happened without the support of many people from throughout the district.”

The new campus will replace RTR’s current three-school configuration, and is scheduled to be completed in time for the 2022-23 school year.

The cost of construction is budgeted at $35 million. Voters from throughout the school district, which includes the cities of Tyler, Russell, Ruthton and Florence as well as a group of townships, approved the proposal in February by more than a 60 percent margin.

RTR School Board Chairman Jeff Hansen spoke about how the need to take action in response to aging school buildings was met with a commitment for doing as much as possible to chart a course that RTR school officials can continue to follow for many years into the future.

“It resulted from the dedication of many individuals,” Hansen said. “I encourage students to be thankful for this new opportunity.”

A wide range of individuals were thanked for the roles they played in the process of weighing future school alternatives, the development of the referendum proposal, land acquisition, and the planning of construction.

Special thanks was extended to Sherman and Jane DeZeeuw, who sold the farmland to the city of Tyler. Marlette also thanked the city for in turn offering the land as a site for the newly approved school.

The location along Lincoln County Road 8 served as a site with plenty of land in a square shape that could accommodate almost any final building design. It also comes with convenient access to U.S. Highway 14 and other nearby Lincoln County roads.

Tyler Mayor Joan Jagt told the crowd that the city and school district worked quickly and effectively to make the most of the opportunity provided by district voters last winter.

“I’m excited for this day, for how all the work that’s gone into the new school is starting to pay off,” Jagt said. “I’m also looking ahead to all the work that we’re all going to do to make this a great place.”

Sherman and Jane DeZeeuw were seated in chairs next to the groundbreaking site podium along with other school supporters. The couple now lives in a house in Tyler. Some of their relatives who attended the groundbreaking had front row bleacher seats.

Eileen (Brandt) Holt, a sister of Jane DeZeeuw, said she enjoyed looking back to memories of growing up at the farm that used to occupy the school site.

She’s happy that the land will now serve as a place destined to offer thousands of children and teenagers opportunities for a bright future.

“I see it as progress,” Holt said. “It’s not a sad time for our family, because Sherm definitely wasn’t going to farm it again. I’m glad it’s happening. It’s a really good thing for everyone.”