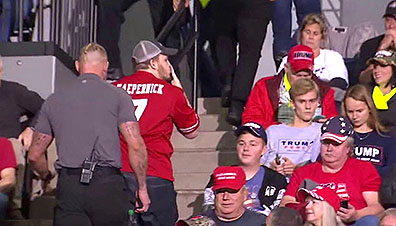 Submitted photo Saul Eugene was escorted out of Trump rally Thursday and blew kisses to the crowd who were jeering him.

Southwest Minnesota State University alum Saul Eugene is the young man who was ejected from President Donald Trump’s rally in Minneapolis Thursday night. A video was taken of the incident which has gone viral in social media.

The 2017 graduate played on the Mustang football team for three seasons. He double majored in political science and history. After his sophomore year at SMSU, Eugene, who is originally from St. Louis Park, interned for Sen. Amy Klobuchar. After graduating he has worked for other Democratic-Farmer-Labor candidates and politicians such as Sen. Tina Smith.

When he became aware that Trump was planning a rally in Minneapolis, Eugene acquired two free tickets. His buddy at the last minute couldn’t go.

Eugene is an admirer of Colin Kaepernick, a former professional football quarterback and activist who is best known for kneeling during the national anthem in protest of police brutality and racism against African Americans in the United States.

Eugene wore a Kaepernick jersey to the rally Thursday.

“The (Kaepernick jersey) is symbolic of everything (Trump followers) hate — a strong black man willing to stand up for himself and take on oppression. Part of it I wore it in solidarity and part of it was, people know when they’re in the wrong I feel like and this type of hatred seems to be a choice. I wanted to hold up that mirror to them.”

Going into the rally at Target Center Eugene kept his jacket on. He knew if someone spotted the jersey it might turn into a mob scene.

“I’m not a small person — I can handle myself, but mob rule is still mob rule,” he said. Once he was in his seat he felt comfortable taking the jacket off.

Eugene never got to hear Trump speak, he was escorted out before he took the stage.

He heard Jennifer Carnahan, the head of the Republican Party in Minnesota, give an opening prayer and speech, Bob Kroll from the Minneapolis Police Union speak, Mike Lindell, the My Pillow CEO, speak and Brad Parscale, Trump’s campaign manager, speak.

Right after Parscale spoke is when Eugene was kicked out.

When Kroll was speaking, Eugene laughed.

“It was so painful to hear,” he said.

“This guy turned around and said ‘why are you even here?” Eugene said. The guy said he wanted to knock him out and Eugene smiled at him and replied, “I dare ya” and winked.

Eugene said the security was called over but said Eugene was allowed to laugh and it wasn’t something they would kick anyone out for.

“They said ‘leave him alone and he’ll leave you alone,'” Eugene said.

It took him 30 minutes to get from the door to First Avenue because of all the protesters, he said.

Eugene had been seated behind the press and FOX 9 had noticed the commotion and filmed Eugene being escorted out. The crowd yelled epithets at him, referring to the Kaepernick jersey.

Eugene has since been interviewed by Time.com about the incident and he has been contacted by various people including “an amazing civil rights activist,” Shaun King.

Twitter noticed him as well. JazzieeB posted the FOX 9 video on Twitter and said, “Much love & respect to this white man for going into the den of hate & bigotry AKA a Trump rally, wearing a #ColinKaepernick NFL Jersey. This is how white people should use their privilege, for justice & equality.” His tweet got over 7,000 likes.

Eugene said he is going to continue to speak out and help get the vote out.

“I have this platform that I wasn’t ready for, but now I’m going to use to the best of my ability to try and further the cause,” he said.