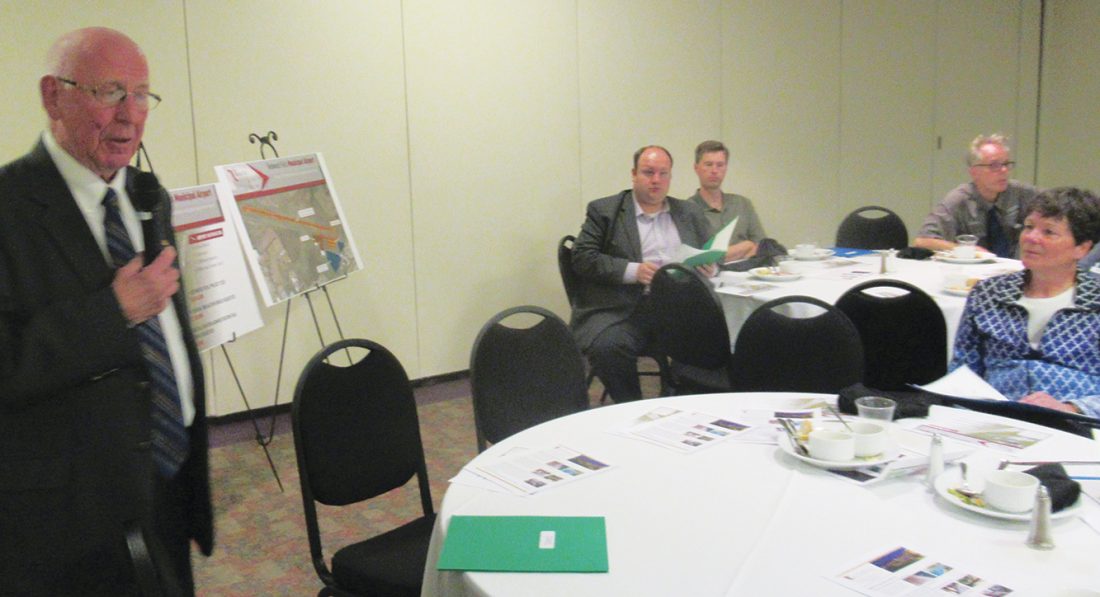 MARSHALL — Minnesota House members spent much of their week in Greater Minnesota, where they learned about a multitude of local initiatives that might qualify for state funding support.

The airport project includes a state budget request of $2.128 million. A state share would match Federal Aviation Administration Funding, which along with local cost shares could help to finance the $5.5 million set of improvements for the runway and lighting system.

“Our airport is thriving, and its amount of traffic is picking up speed,” said Redwood Falls Public Works Project Coordinator Jim Doering. “We want to stay ahead of that. Our goal is to be one of the nicest smallest airports out there.”

Doering and engineer Silas Parmar, an aviation project manager from the Bolton and Menk consulting firm, explained that 10 percent of the project is set to come from local matching funds. Residents of Redwood Falls also pay a $25,000 annual operating levy to support federal funding. The airport’s annual budget totals $365,000.

Currie City Council member Gene Short, a former Redwood County Commissioner from Belview who has lived in Currie for the past 10 years, spoke about Currie’s request for $625,000 in state funds to put toward water and sewer line replacements.

He said the funding would cover what’s not eligible under USDA Rural Development grant guidelines, which would be difficult to absorb into the city tax levy. The city is already investing $201,000 in local cost share. Residents are also being taxed for the repaying of two other USDA redevelopment loans.

“We’re one of the only cities in Minnesota that was still getting by with much of its original century-old infrastructure,” Short said. “Most of the hydrants are too old to get parts for them anymore.”

He said several important segments of the project were completed in 2019, including line replacement along Currie main thoroughfare, Mill Street, which is co-designated as a Murray County highway. The entire project is taking place over a two-year construction period.

Tyler Mayor Joan Jagt and Tyler City Administrator Stephanie LaBrune gave the third and final presentation. They spoke about Tyler’s request for $4.337 million in state funds to help in the modernization and upsizing of the city’s sewer system.

LaBrune discussed how the funding is needed to scale up for 21st century demands that will be placed on the city’s infrastructure.

A large part of the need involves construction of a new K-12 public school campus on the west side of Tyler. At the same time, additional medical facilities are planned on the east side of the city. The health care expansion is part of the city’s recent ties to the Avera health care system headquartered in Sioux Falls, South Dakota.

Jagt said Tyler city residents have demonstrated strong support for upgrading the sewer system and a willingness to pay higher utility costs to make it possible.

Along with city expansion, there’s a need to replace outdated parts of the existing sewer network. Water infiltration in parts of the system has reduced its ability to function with the best possible efficiency. The impact is especially apparent after major rain events, when many residents expect water backup in basements.

“We’ll definitely have a (sewer) rate increase even with state funding,” Jagt said. “The community is aware of it and has been supportive of our proposed upgrades. Residents realize that it’s a big issue.”

Prior to the Tuesday evening hearing, the legislative committee visited a group of locations that have also made state budget requests.

A stop near Dawson included information about the Lincoln Pipestone Rural Water system’s next planned expansion for rural water users. A stop in Marshall at the city National Guard Armory led to familiarity with plans for a locally-based Readiness Center. SMSU provided information about its swimming facility improvements and renovation of a group of indoor walkways that link buildings together on the mostly interconnected campus.

Stops on Wednesday included locations in the Worthington, Windom, Fairmont and Mankato areas. The agenda for the third and final day involved sites in the Mankato area, Carver County, Scott County and Burnsville.

“This is a valuable opportunity to learn about some of the projects we’re being asked to fund,” said House Capitol Investment Committee Chair Mary Murphy, DFL-Hermantown.

“Unfortunately we won’t be able to give something to everybody. We’ll have to do what we can to help in places that have the most urgent need and if possible also support some of the projects that would be good things to have.”

Murphy and Minnesota Sen. Bill Weber, R-Luverne, who attended Tuesday’s committee hearing, both estimated that the final state bonding bill next spring will total far less than the total amount being requested by local and regional organizations.

“There are always limitations with the funding on a state bonding bill,” Weber said. “It’s important to hear from the grass roots organizations and individual residents. This was a good chance for them to state their case.”