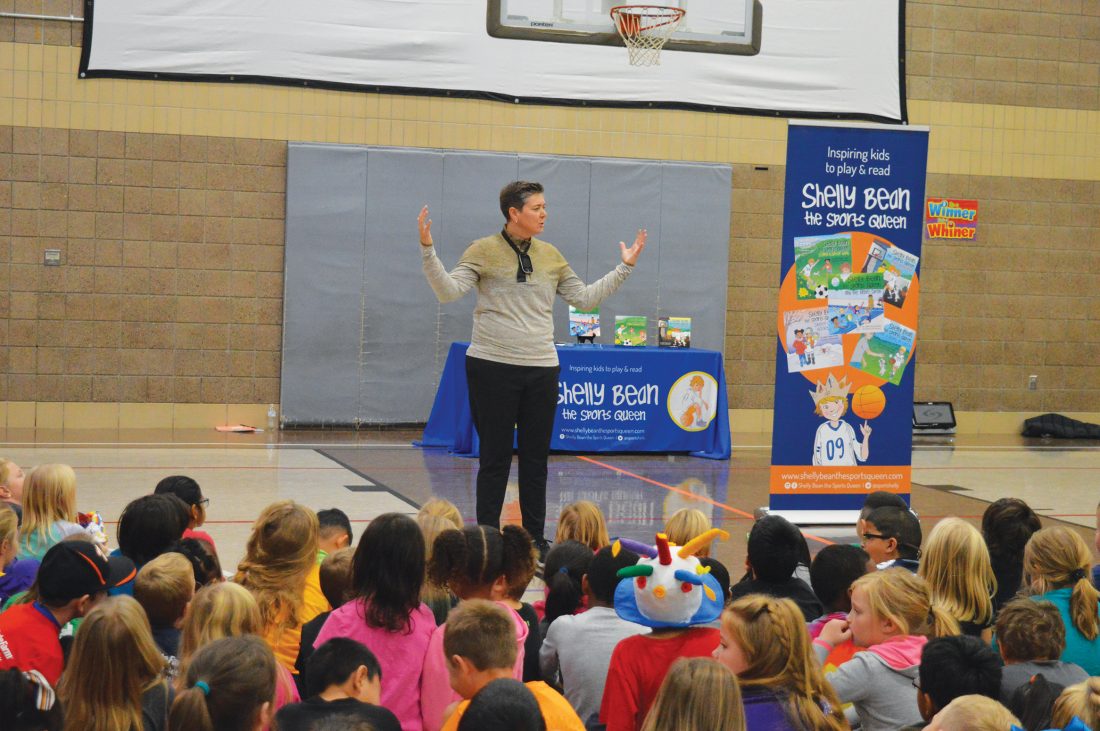 MARSHALL — When Shelly Boyum-Breen was in high school in Brainerd she was a star athlete. She realized she was a role model to others wherever she went — the mall, the gas station, the movie theater. One year she was a particularly big deal because she was on her way to scoring 1,000 points, something no girl previously had done. At a home game where she was at 999 points, the local radio station was broadcasting the game live, a bouquet of roses was at the ready, the cheerleaders had made a banner, when the opposing team made a technical foul.

“My team chose me to do the free throw,” Boyum-Breen told first- and second-graders Tuesday morning in the Park Side gym. “There was so much excitement. The gym was silent.”

Boyum-Breen demonstrated with a basketball to the Park Siders what happened next. She asked a student to come up and throw her the ball and another student to pretend like he was a newspaper photographer taking her photo.

“Not only did I miss the shot — I missed the whole basket,” she said, deliberately throwing the ball well clear of the basket. “I was so embarrassed. I had never failed like that before. I wanted to cry. I wanted to disappear. But there were kids watching me and I was their role model, so I high-fived my team and kept playing the game.”

Boyum-Breen added that 2 minutes later the ball was passed to her and “I scored a point. I did not give up.”

She said she went from having an awful experience to two minutes later having the time of her life.

“Not only was it fun for me, but fun for others as well,” she said.

In addition to basketball, she has played volleyball, golf, tennis, soccer, hockey, has figure skated, downhill and cross-country skied, water skied, participated in gymnastics, dance, BMX, swimming, karate and rugby which is “kinda like football, but without a helmet and pads,” she said.

“I’ve done all of those things,” she said. “I liked moving my body. I liked being with friends and family.”

Boyum-Breen said she liked basketball so much that she would even shoot hoops in the driveway of her parents’ house in the winter, shoveling the snow and chipping the ice away. She liked baseball so much that she used masking tape to form a square on the garage so she could practice pitching. Her dad finally told her to stop because she was making a dent.

Boyum-Breen grew up to be a physical education teacher and coach. She then worked with the Minnesota Timberwolves and Lynx for three years and later moved into a sales consulting role with the Lynx, the New York Liberty and the 10th Anniversary WNBA All-Star Game at Madison Square Garden.

After noticing there were no books about girls playing sports on a scholastic book order form, she created the Shelly Bean the Sports Queen series.

Boyum-Breen said Shelly Bean loves to learn new sports, but it’s frustrating when you are first learning a sport.

“She’s not good at them when she first tries, wants to quit, wants to throw a tantrum,” Boyum-Breen said. “But at the end of every story she gets back up and tries again and is proud of herself.”

The books are illustrated by Marieka Heinlen who “looked at pictures of me when I was a kid,” said Boyum-Breen.

In the books, there are tips for each sport. In the basketball book, for example, there is a tip of “using your legs for power.”

Boyum-Breen read one of her five books and afterward asked questions to see how well the first- and second-graders were listening. She asked what is one of the nicknames Shelly Bean’s older brothers called her.

“Jellybean,” was the answer and Bethany got an autographed book from Boyum-Breen.

After a couple more questions and book hand-outs, the kids got to ask questions of Boyum-Breen.

One student asked why does Shelly Bean wear No. 9 on every jersey. Boyum-Breen replied that it honors Title IX, a law that was passed to give equal footing to girls in sports.