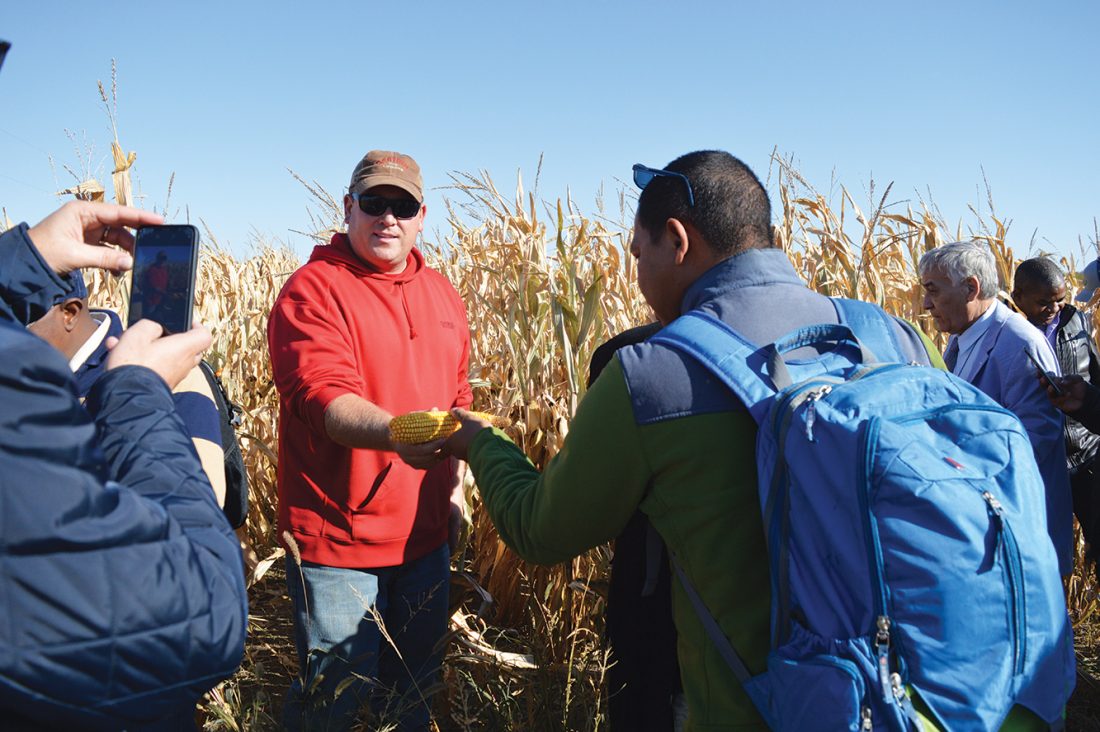 Photo by Deb Gau Brian Velde shows an ear of corn to a group of officials from the Middle East and Africa, as they tour Velde Farms near Wood Lake on Thursday. The group was in Minnesota to learn about different aspects of the ethanol industry, including growing corn as feedstock.

WOOD LAKE — Brian Velde was surrounded by people, as he answered questions about farming in Minnesota. He turned to the cornfield behind him, and broke off an ear to show the group. As the ear of corn was handed around, several people brought out their cell phones to take pictures.

The gathering was a little more high-profile than just an educational trip to the farm, however. The group of 15 people visiting Velde Farms on Thursday afternoon was a trade delegation, including members from six different Middle Eastern and African countries.

After the summit in Washington, delegates from different global regions went on two-day tours to destinations including midwestern states like Iowa, Minnesota, Nebraska, North Dakota and Wisconsin.

“We know Minnesota is a state that produces a lot of corn and soybeans,” Taieb said, and there were also opportunities to see how biofuels are made from those crops.

The Minnesota tour group traveled through southwest Minnesota on Thursday. Their itinerary included stops at Dooley’s Petroleum in Willmar, to learn about ethanol blending and U.S. fuel markets, and a stop at the Granite Falls Energy ethanol plant, before visiting Velde Farms near Wood Lake.

“This last stop is really about the feedstock,” Coulter said.

Coulter said there is international interest in ethanol, both as a value-added product and as a fuel source. Increasing use of biofuels like ethanol would be a way to help countries meet their goals to help fight climate change under the Paris Agreement.

For the last 10 years, ethanol has been the U.S.’s fastest-growing agricultural export, according to the U.S. Department of Agriculture’s Foreign Agricultural Service. In 2018, the U.S. exported more than 1.72 billion gallons of ethanol — the equivalent of 609 million bushels of corn — valued at $2.7 billion.