A full century of life 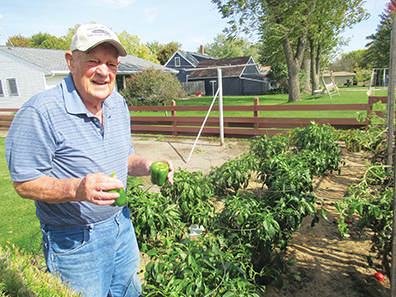 Photo by Jim Muchlinski Tyler resident D.C. Pinckney turned 100 Monday and recently harvested the last of his green peppers for the 2019 growing season.

TYLER — Dick Pinckney celebrated two major milestones this month — the end of his 2019 growing season and a full century of life.

Pinckney turned 100 on Monday. He lives in his own house in Tyler, and leads an active life both physically and socially.

His favorite pastime is vegetable gardening. He spends almost every day during the growing season in his backyard, where he raises an abundance of tomatoes, green beans, zucchini squash, beets, potatoes and other popular produce.

He not only produces plenty for himself, he gives away much of his crops to anyone who has a need for fresh, home grown vegetables.

“I give at least some of it away every year,” Pinckney said. “I have a big garden because of how much I enjoy keeping busy with it. Anything extra is free for anyone who wants it.”

He said gardening is his single greatest pastime. In the winter months he fills some of the void by hand writing long letters to friends and relatives.

He was born in Garvin and grew up on a farm. His father kept farming during the depths of the Great Depression, even though he was not able to produce any crop at all in 1931, 1933 or 1934.

The farm’s fortunes improved somewhat as the Dust Bowl years waned later in the 1930s. Part of the reason it endured was that his uncle operated the bank in Garvin, and was able to help his father fulfill a goal of being a farmer.

“With his brother as his banker, he wasn’t exactly going to lose the farm,” Pinckney said. “We got by, but it was a life that some people considered barbaric. There was no heat upstairs where my brothers and I slept.”

He said their house had a primitive rock foundation. He and his two brothers had plenty of blankets and also a thick buffalo skin for the coldest part of winter.

Without much in terms of indoor comforts or amusements, they led active outdoor lives even when they weren’t doing farm work.

“We were almost always outside,” Pinckney recalled. “We had strap-on skates, wooden skis, and traps to catch whatever we could to make extra money.”

He said it was especially good fortune to catch mink. If he and his brothers had favorable trap activity, they’d have enough money to go to Garvin area dances.

In 1939, he succeeded in getting his first job other than farm work. He was offered a sought-after position as the assistant manager for H.W. Ross Lumber’s lumber yard in Russell. In 1941, he was promoted through a transfer to a larger lumber yard in Cottonwood.

He served in the U.S. Army in World War II, rising to the rank of master sergeant by the end of the war. He then came back to the Upper Midwest and to the lumber business, with an opportunity to manage the H.W. Ross operations in Estelline, South Dakota.

“I’d probably still be in Estelline if it weren’t for changes in the lumber business,” Pinckney said. “I spent many hours at Lake Poinsett. There was all the fishing and hunting I could ever want. I thought it was paradise.”

He moved from Estelline as the H.W. Ross lumber operations were being sold off, a process that included selling its Marshall site to J.C. Penney for the downtown Penney’s store 30 years before the store was relocated to the Marshall Square Shopping Center.

The Marshall sale was an indication to Pinckney that he needed to scout around for job opportunities. He heard about Tyler’s management opportunity through a tip from a salesman, which led to a manager position that lasted until he retired in 1985.

“I was happy to move to Tyler,” he said. “It always worked out for my family and I to stay, and I’m still here for the same reasons. Tyler has always had a lot to offer.”

He still enjoys eating out at the Tyler Golf Club on men’s nights. His greatest golf memory involves shooting a par round on Tyler’s course. He said he’s hit the flagstick off the tee on a Par 3 hole, but has never scored a hole-in-one.

His interest in gardening took on added importance late in life, when knee problems forced him to give up golf.

He also wears hearing aids and sees a kidney specialist on a regular basis for a kidney condition that has no known cure.

Other than that, he said he’s managed to stay healthy and active to the point that he still enjoys life. His wife, Doris, passed away in 2003. One of his two sons, Darris, lives next door and his other son, Laron, lives in Rosemount.

He still enjoys family activities, socializing with friends, reading, and doing his own banking. He also cooks most of his own meals and enjoys baking a wide range of breads and desserts.

His birthday week will include cake at First Independent Bank in Russell. Hilary Buchert, who works at the bank, said the entire staff are among Pinckney’s many friends.

“He’s an amazing man,” Buchert said. “When we asked him about having a cake for his birthday, he said he’d like a homemade one and then offered to bake it himself if none of us had enough time. We all enjoy seeing him on a regular basis and talking to him. He always has a smile on his face.”