A foundation for success

Marshall Machine Shop Inc. has been a family owned and operated business for over 25 years and is starting its third expansion 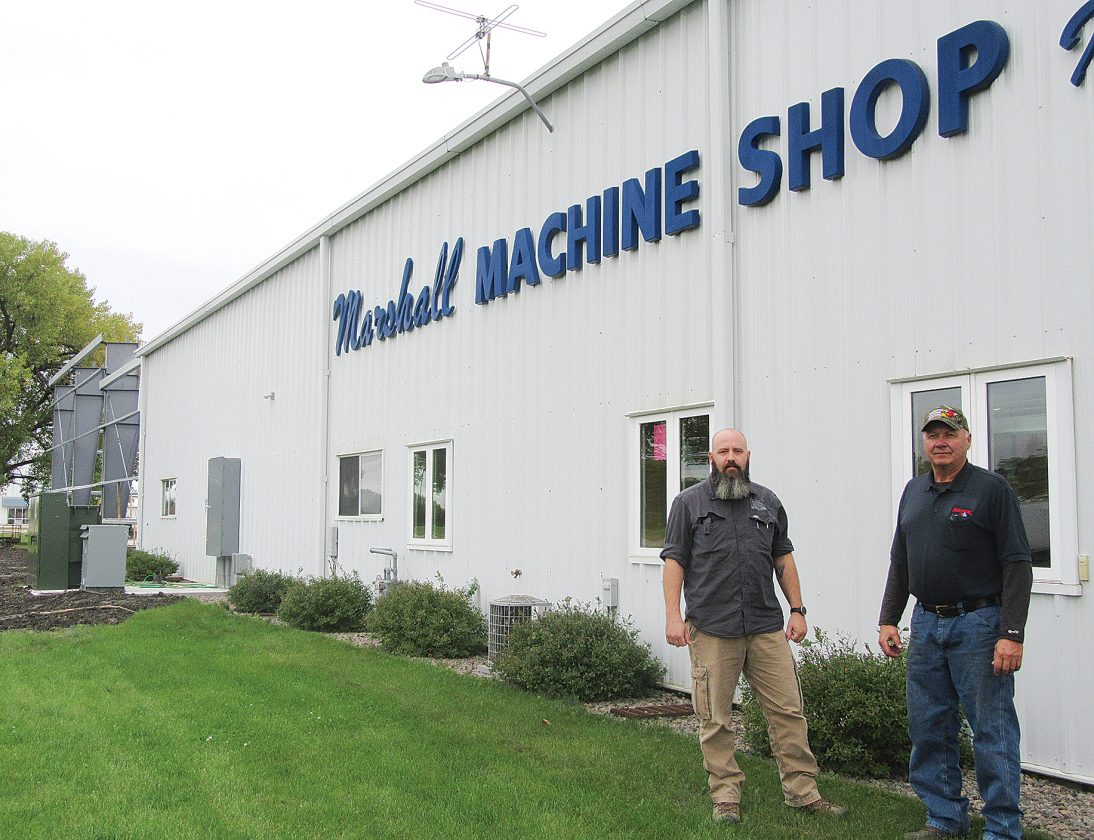 Photo by Karin Elton Doug Anderson and Josh Anderson, owners of the Marshall Machine Shop, stand in front of the building, which will soon have an addition in back.

MARSHALL — Doug Anderson has been working at Marshall Machine Shop for 39 years. He has seen a lot of changes to the business, first as an employee, then as the owner in 1991.

“We ran out of room and ran out of power,” Doug Anderson said. “The more and more equipment we got, we didn’t have enough power coming in. The city said we were at the end so we decided to relocate.”

The shop was relocated in 1998 to the corner of West Main Street and Channel Parkway and it has continued to grow. In 2002 they expanded and again in 2012 — the shop and office. On Sept. 25, Marshall Machine Shop laid the foundation for another addition — 7,500 square feet — making the main building 20,000 feet, a total of 26,000 square feet for both buildings that comprise Marshall Machine Shop.

Doug manages the business with his son, Josh Anderson, who is the operations manager and lead draftsman/detailer.

They would like the new addition done “before the snow flies,” said Josh.

“The rain has delayed it quite a bit,” said Doug. “But it’s coming along well. We have Bladholm Construction doing it. Bladholm has done a good job and so has D&G Excavating of working despite the rainy weather and mud.”

The 75-foot outside concrete “apron” is almost complete, which is the pad for steel storage and driving the fork lifts.

The shop does metal fabrication, from beams and columns to steel joists and decking, lintels, staircases, landings, and rails. They manufacture the Marshall Picker, which attaches to an ATV for picking rock. Another device they have is an automated poultry loader called the Marshall Loader.

“We have multiple patents on that,” said Doug. “We have a lot of customers in different states — Indiana, Illinois, North Carolina and South Carolina. A lot of our work is out of state. Some years only 10 percent is in state.”

They are supplying all the steel for the new Russell-Tyler-Ruthton school.

“We do a lot of schools, hospitals,” Doug said.

Doug says the secret to the shop’s success is diversification.

They are continually upgrading the equipment as needed.

“Equipment changes all the time,” Doug said. “There’s a lot of new stuff.”

“We research equipment that makes the shop more efficient,” said Josh, “that makes our guys work smarter, not harder.”

After going to school for machine tool, Josh manages the structural steel portion of the business.

“He just bought into the shop this year. He bought 35 percent of the business in the beginning of the year,” said Doug, “and eventually he’ll take it over.”

Josh has been working in the shop since he was 9 years old.

“I swept floors, cleaned bathrooms,” he said. “A year or two later he (Doug) taught me how to weld, cut steel.”

There is another 9-year-old working there these days — Josh’s son, Tucker.

“He enjoys coming here,” said Josh. “The guys give him a hard time and he gives them a hard time. He wants to learn to weld. I got him sweeping and cleaning, punching iron.”

Josh explained that “punching iron” means pushing holes into iron with a tool.