A change in leadership 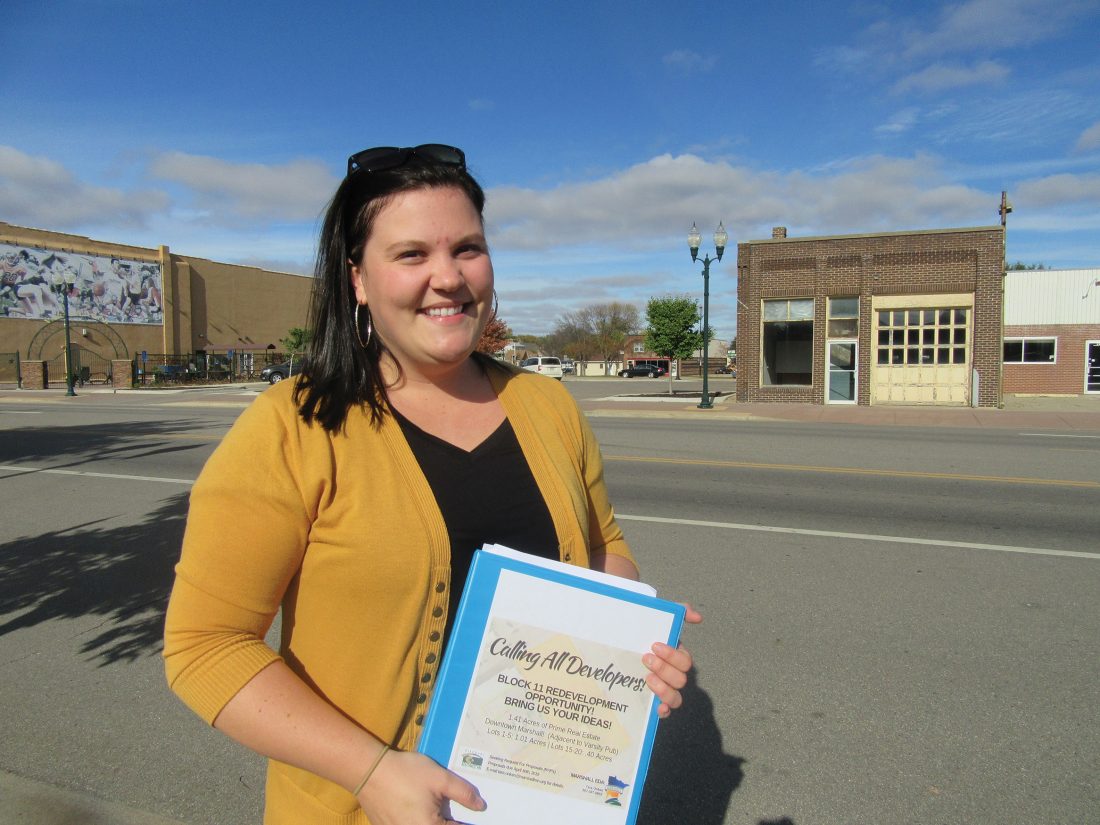 Photo by Deb Gau As she steps down as Marshall Economic Development Authority Director, Tara Onken said there are some ongoing development projects she wishes she could see through to the end. The proposed redevelopment of Block 11 downtown was one. But the project – contained in a large binder – was in good hands going forward, she said.

MARSHALL — Earlier that day, she had attended the Marshall Economic Development Authority’s board meeting. But while that was a regular part of her job, Tara Onken said Wednesday’s board meeting was different.

“It was definitely bittersweet,” Onken said, knowing that it was her last meeting as EDA director.

Onken, who has been part of the Marshall EDA since 2017, is resigning as director. Today is her last day on the job, she said.

But in her time with the EDA, Onken has had a chance to help in a variety of business expansions and new development in Marshall over the past two years. It’s been rewarding getting to see some of those projects come to fruition, she said.

“This is a great place to start a business,” Onken said of Marshall. “Marshall has a lot to be proud of.”

Onken said this week she has had some potential job opportunities open up, although she couldn’t yet share details of what she’s doing next. She did say, however, that she intends to stay in the area.

With Onken stepping down, members of the Marshall City Council and city staff have been discussing possible options for hiring a new EDA director. The EDA was the focus of a council work session on Oct. 8. Marshall City Administrator Sharon Hanson said she hopes to bring a slightly updated job description for the EDA director position before the council.

Consensus from the council work session was to hire a new EDA director through the city, Hanson said. It would be a change for the position — currently, the city helps provide EDA services, but the Marshall Area Chamber of Commerce hired the EDA director, Hanson said.

Economic development wasn’t something Onken had initially thought about as a career. She graduated from South Dakota State University in 2012 with degrees in geography and sociology. She became a realtor, and served as real estate development coordinator for the Southwest Minnesota Housing Partnership, before an ad in her hometown newspaper opened up a new path.

Onken responded to an advertisement in the Balaton newspaper, calling for members to join the Balaton EDA board. She wound up becoming a board member, and then things started moving fairly quickly. Onken became the Balaton EDA executive director in 2015. Later that same year, Onken was hired to provide EDA services to the city of Tracy. Starting in 2017, she began working for the Marshall EDA.

“Looking back, it’s clear it was a good fit,” Onken said. Economic development was “the perfect cross” of helping people and real estate planning, she said. “I’ve always looked for ways to be a good steward of the community.”

During the first part of Onken’s time with the Marshall EDA, she worked with former Marshall Area Chamber of Commerce and EDA director Cal Brink. The experience was good preparation, before Brink stepped down from the EDA in 2018, and Onken became the sole EDA director in Marshall. However, she said, she was still part of a team — and teamwork was a crucial part of encouraging new business and economic development in town.

Marshall has been the site of some big development projects in the past couple of years, including expansions of local businesses and industries like Action TrackChair, Marshall Machine Shop, and Harrison Trucking. New retail stores like the Ashley HomeStore and Hobby Lobby have opened, and new housing like the Nexus apartment complex on Legion Field Road opened this fall as well.

Those development projects meant a lot of different behind-the-scenes work, Onken said, but she was proud to be able to help connect businesses to development opportunities in Marshall. In the case of Nexus, she said, “That was an identified need in the community,” for more housing options.

Working with businesspeople, developers and community members has also been a rewarding experience, she said.

“The people I work with, they become like good friends,” Onken said.

Some development projects Onken worked with had their share of controversy, however. In 2018, the developers’ request for Tax Increment Financing to help build what would become the Nexus apartments on Legion Field Road drew objections from other property managers in Marshall.

Trying to balance the needs of businesses and community members was part of her job, Onken said.

“It makes it challenging and unique,” she said.

“On all projects, there is always going to be opposition, no matter what,” she said. Having good communication with the community can help. “We try to have conversations early and often,” while still respecting developers’ needs, Onken said.

There are still some big development projects, like a proposed mixed-use building on Block 11 of Marshall’s downtown, that aren’t finished yet. But she said she knows the proposal, and the EDA’s mission, will be in good hands.

“I think people will keep the momentum going,” she said.