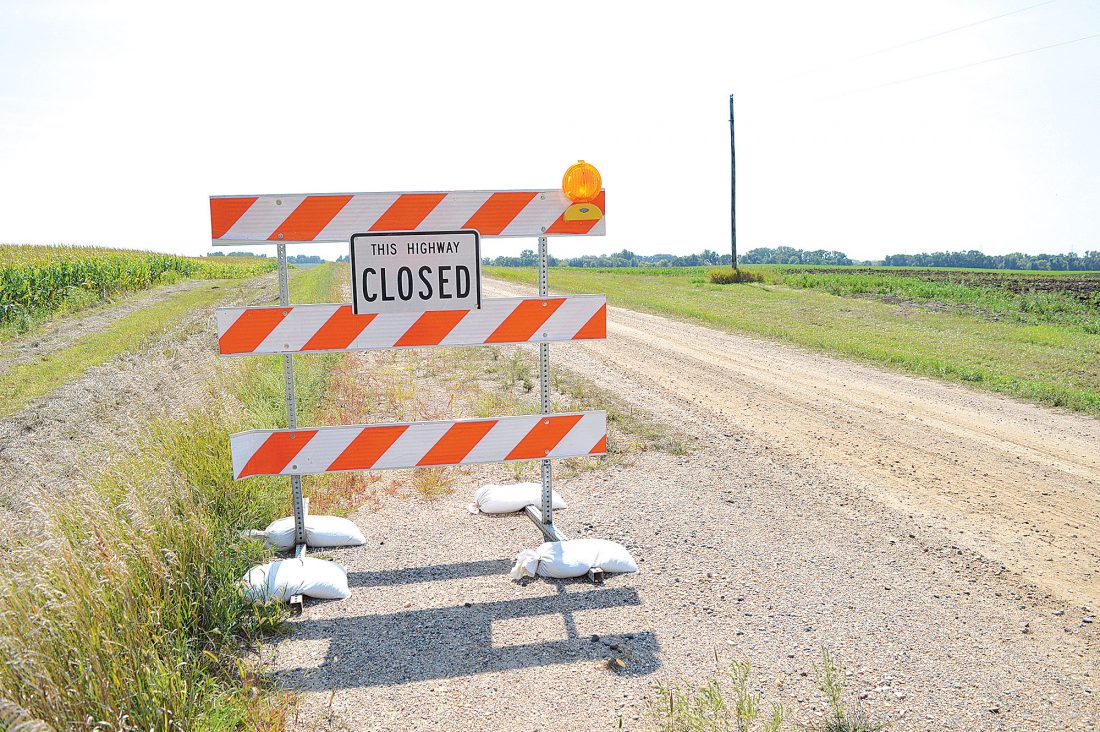 Photos by Deb Gau Warning signs on Lyon County Road 73 mark an area where the road was washed away by flood damage earlier this year. Lyon County highway engineer Aaron VanMoer said the blowout was one of several road repair projects the county still needs to complete.

MARSHALL — It’s been a rough year for road maintenance in Lyon County — after extreme snows and melting this spring, and another couple of rain events over the spring and summer, the county highway department still has major repairs left to complete.

“We had some of the worst road conditions I’ve seen this spring,” including road washouts and an unusual number of frost boils, said Lyon County Highway Engineer Aaron VanMoer.

VanMoer gave an update on county highway conditions to members of the Lyon County Board earlier this week. VanMoer said there are still some major flood repairs left on the highway department’s “to-do” list this year, as well as maintenance tasks like ditch cleaning and culvert repairs.

VanMoer said there was so much spring snow this year that the county hired contractors to bulldoze snow off of gravel roads. The process took about a week, and cost $63,000. Other expenses came from snowmelt in March, which caused washouts and closed roads around the county. VanMoer said Lyon County is going through the FEMA reimbursement process for about $100,000 worth of expenses.

However, he said, “We’re not looking to receive those anytime soon.” Lyon County still hasn’t received any of its $185,000 in payments from FEMA for 2018’s flood event, he said.

In addition, Lyon County has received extra road damage from rain events on May 17 and July 5. But those events were outside the incident window for FEMA reimbursements.

The highway department has continued to work on road maintenance, and has re-graveled around 100 miles of county road. Some construction projects have been completed, included grading of about 4.5 miles of County Road 3 north of Minneota, and bridge replacements on County Road 7 near the Highway 23 intersection.

But at the same time, VanMoer said, there are still some major flood repairs left to do. One example is a blowout on Lyon County Road 73. High water levels and nearby petroleum pipelines made that project more difficult, he said.

“We do have that designed,” VanMoer said. He said the plan is for the repair on County Road 73 to be finished by harvest time.

Other major flood repairs that still need to be done include repairing slopes along County Road 60 over the Redwood River; on County Road 8 along Three Mile Creek east of Ghent; and extending box culverts on County Road 11 near Tracy.

VanMoer said another task for the highway department that’s had to wait until other road damage could be repaired was the replacement of faded street signs in Lyon County.