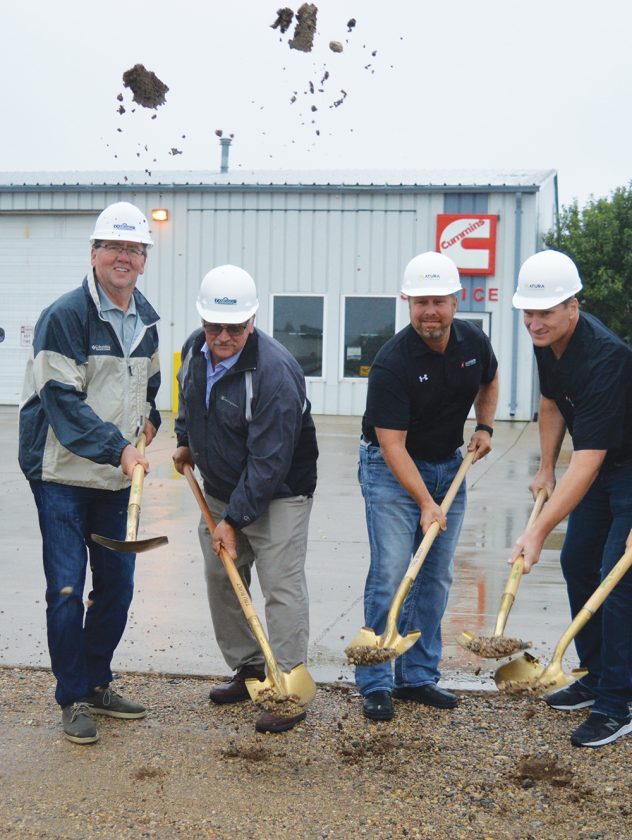 MARSHALL — They took some time out for a groundbreaking ceremony, but the bustle at Harrison Truck Centers didn’t slow much even as company owners and local officials brought out the golden shovels.

The volume of business at the Marshall location is a big reason why Harrison Truck Centers is starting a $3.5 million expansion project along U.S. Highway 59 in town.

“This location has grown about 175% over the last year,” especially with the parts and service side of the business, said Harrison Truck Centers COO Chad Harrison. But HTC can’t add more technicians without more service bays for heavy trucks, he said.

HTC sells and services new and used heavy trucks. The company also has three other locations in Minnesota, and four in Iowa.

Chad Harrison, HTC President and CEO Brian Harrison, and CFO Dustin Petersen were all in Marshall on Monday for the groundbreaking for the expansion project. HTC will add about 11,000 square feet of space, as well as renovating its existing building in Marshall, Chad Harrison said. With the addition, HTC will have more truck bays, as well as features like a new showroom and offices.

With more room to grow, HTC hopes to add about 13 to 15 new jobs in Marshall over the next five to eight years, Chad Harrison said.

Marshall Mayor Bob Byrnes said the expansion at HTC was also significant for being the first business development project to receive a city tax abatement, under a new policy approved early this year.

“It was nice to have the support” from the city as HTC expands in Marshall, Chad Harrison said.

“It’s a great project,” Byrnes said. “Trucking and transportation is vital to this region.”

Trucking also has an important role in agriculture in the area, said Lyon County Commissioner Gary Crowley. The expansion at HTC will be positive in that sense, too.

“I would say, thank you for choosing Lyon County and Marshall to expand,” Crowley said to HTC representatives on Monday.