Next door to disaster 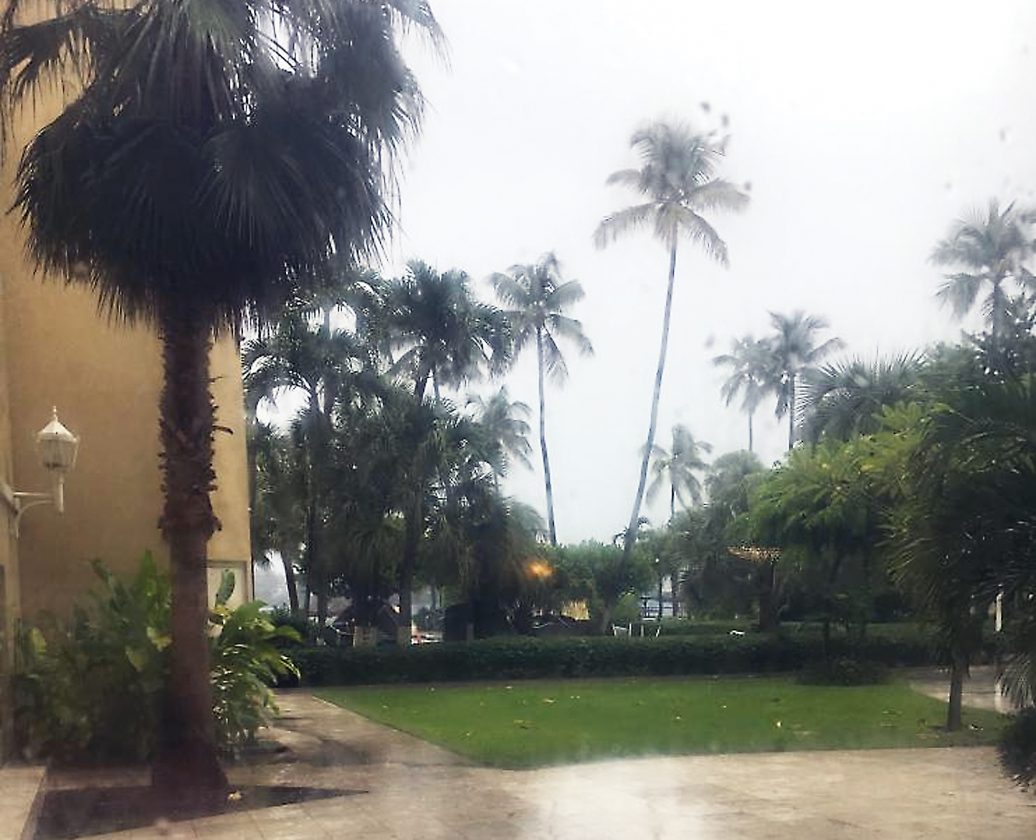 Submitted photos Above: Pictured is what Ashley Sovell and her boyfriend Brady Bjornson saw last Saturday evening at the British Colonial Hilton Hotel as the weather was starting to get bad in Nassau.

A couple months ago Marshall native Ashley Sovell and her boyfriend, Brady Bjornson, decided the Bahamas would be a great place to spend Labor Day weekend.

Hurricane Dorian, at Category 5 intensity, made landfall in the Bahamas on Sunday, causing extreme destruction with “houses looking like they were put in a blender,” according to cnn.com. As of Thursday morning, the storm had killed at least 20 people.

Sovell and Bjornson, who live in Madison, Wis., flew out of Madison the morning of Friday, Aug. 30, to Atlanta, Ga., international airport. By that time they were aware of something called “hurricane season” and were monitoring CNN for updates on the impending hurricane, but their trip, booked through Costco Travel, was nonrefundable and they decided to chance it.

“I figured they wouldn’t let us fly out of Atlanta if it was that bad,” Sovell said. “I was keeping an eye out the week prior to what category the storm was and where the eye of the hurricane was expected to be.”

Other people had canceled their plans, Sovell said, because they were aboard a big Delta Boeing plane and there were only 10 people in it.

They landed in Nassau on New Providence Island at 3 p.m. and the weather was “sunny and partly cloudy,” Friday and Saturday and then on Sunday “not so much,” Sovell said.

At their hotel they had a pool and then private beach access so they spent their time on the beach Saturday. By Sunday the island received heavy rains.

“The hurricane was passing through the islands, but didn’t directly hit the island where we were,” she said. The eye of the storm was about 60 miles away and “we got the aftereffects — a heavy downpour rain, with wind. It had torn down palm trees at our location.” She said the winds were about 30 miles per hour and where the storm hit the worst, the winds were almost 200 mph.

The two tried to have a normal vacation but Sovell said after Saturday, the hotel employees said we could use the beach at their own risk and after a few minutes of getting sand blown in their face, they left the beach. They had had an excursion planned to a nearby island which had been paid for, a swim with dolphins and stingrays experience, but that was canceled because there was no ferry transportation.

Everything was pretty much closed down Saturday night in downtown Nassau and the stores were sandbagged.

“The city is only 1 foot above sea level, so they were worried about flooding,” Sovell said.

The next day, the streets were silent.

“Not a soul was on the street,” she said.

She noticed the Bahamians tend to do things at the last minute.

“They were sandbagging in the rain,” Sovell said.

Sovell, a registered nurse who graduated from Southwest Minnesota State University with a bachelor’s degree in nursing and is working on her master’s degree, read a local paper which reported that the prime minister was frustrated that some citizens refused to evacuate and then wanted to be rescued during the storm.

Sovell saw some residents take sandbags from stores that had been using them to protect their businesses.

Hotel guests received a letter saying they were in a storm watch, but would receive more information on the protocol of what to do in case it turned into a storm warning.

Sovell said she learned that 85 percent of the Bahama economy is tourist-based, so the storm was affecting that. She noticed the contrast between the rich and poor on the island. The hotel she was staying at had marble tile staircases and palm trees in the lobby while native Bahamians housing was “really sad. The buildings were half abandoned and there were bars on the windows.”

The storm only began moving out of the Bahamas on Tuesday.

“We tried to fly out on Monday evening,” Sovell said. “The transportation, which was part of our hotel package, was canceled and would not take us. There were no flights in or out of the airport.”

They were told there was an 8 a.m. flight Tuesday and woke up at 4 a.m. that day to prepare for departure for the airport at 5 a.m. They drove in a bus on water-covered roads. Landlines were down, but Wi-Fi was still available and that’s how they got information.

“We arrived at the airport before the travel agents and Delta airline agents,” she said. “There were four flights to Atlanta. The 8 a.m. was canceled. The next flight was canceled. The next flight at 1 p.m. was delayed.” Finally at 5 p.m., after waiting 12 hours in the airport, their flight was ready to take off. Some flights from Atlanta had turned around at Tampa, Florida.

The two tried to have a good time on their trip — “it was nice just getting out of the states and seeing something different,” she said — but “in the back of my mind, I was worried.”

The TV showed the hurricane was not supposed to land directly on their island, but “you can’t always trust what the radar shows,” she said. “Like for a snowstorm, 2 inches are predicted and then you get a foot. You never know what to expect.”

She said “overall it was a fairly nice vacation, the people were nice, but I’ve learned my lesson not to book a vacation there from June to November.”