Looking for a slice of American pie in Marshall

Hollanders tour US in classic vehicles 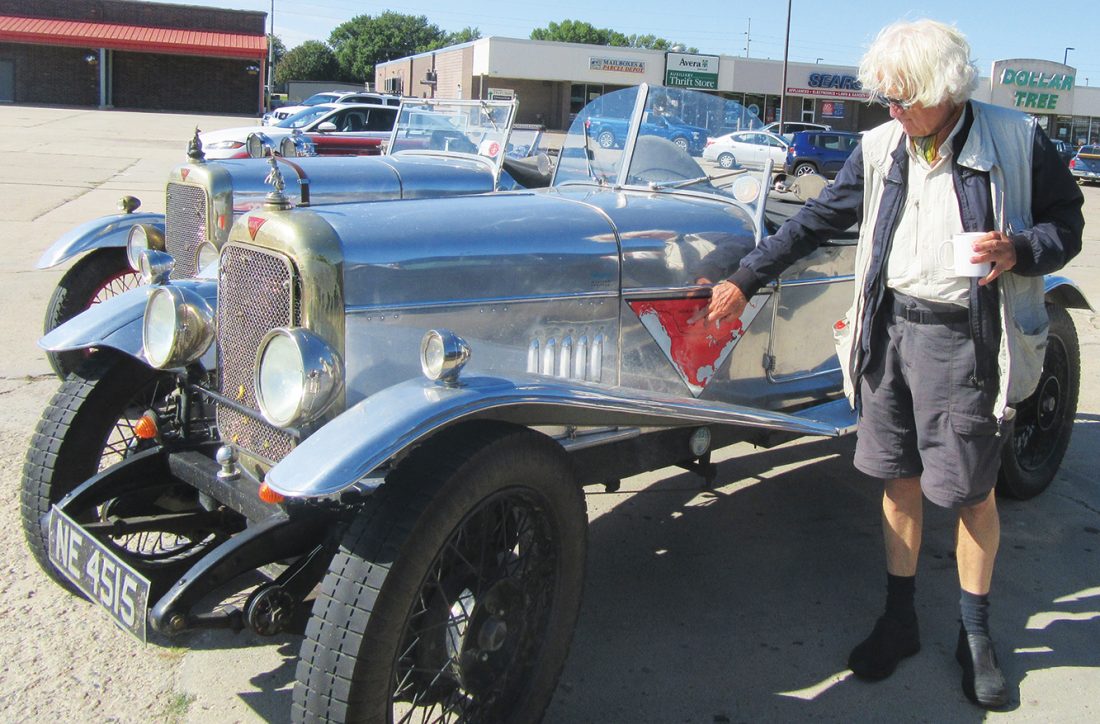 Photo by Karin Elton Bob Meijer of the Netherlands indicates on a map his trip from Alaska to South Dakota in his 1925 Alvis Lagonda. He and seven friends stopped at Perkins Thursday on their way to Minneapolis.

MARSHALL — Bob Meijer eyed the large slice of lemon meringue pie his friend was served at Perkins in Marshall Thursday and drily observed, “they serve such small portions.”

Meijer and seven of his friends dropped by Perkins for coffee on their way to Minneapolis, which, he said was about 225 kilometers away.

He and his friends are used to smaller portions and kilometers because they are from the Netherlands. They started out three weeks ago in Halifax, Nova Scotia, drove their classic vehicles to Anchorage, Alaska, and then from there went to Washington state, then through Idaho and visited Yellowstone Park.

“Our destination is Minneapolis where we will store our cars for the winter season and then come back in April,” Meijer said. “We’ll continue our trip to the East Coast.”

The cars that will be stored in Minneapolis are classics, originally made in the United Kingdom. The group has two 1925 Alvis Lagondas — “sister cars,” said Meijer — and two 1935 Alvis Lagondas which seat two. The 1925 models only seat one. With them on their excursion is a Land Rover which travels with them in case of breakdowns, of which there are only a few, Meijer said.

“Flat tires, nothing serious,” he said.

After Yellowstone Park, the group drove through the Badlands in South Dakota and saw Mount Rushmore in the Black Hills.

Meijer drove one of the 1925 Alvis Lagondas. It has the muffler outside the car on the passenger side for ground clearance, he said. It’s loud, but “it’s a nice sound.”

On the bonnet or hood of the vehicle is a hare ornament.

“The hare is a symbol of speed and these cars are racing cars,” Meijer said.

These days the top speed is 60 miles per hour.

The Alvis Lagonda is a convertible. In case of inclement weather, the soft top can be affixed.

“If it’s just lightly raining I won’t use it, but if it’s a thunderstorm I will,” said Meijer. “It rained in Washington.”

The group prefers to take “secondary roads,” said Meijer. That way they can see more of the country.

More information about the vehicles can be viewed at http://bicesterheritage.co.uk/.