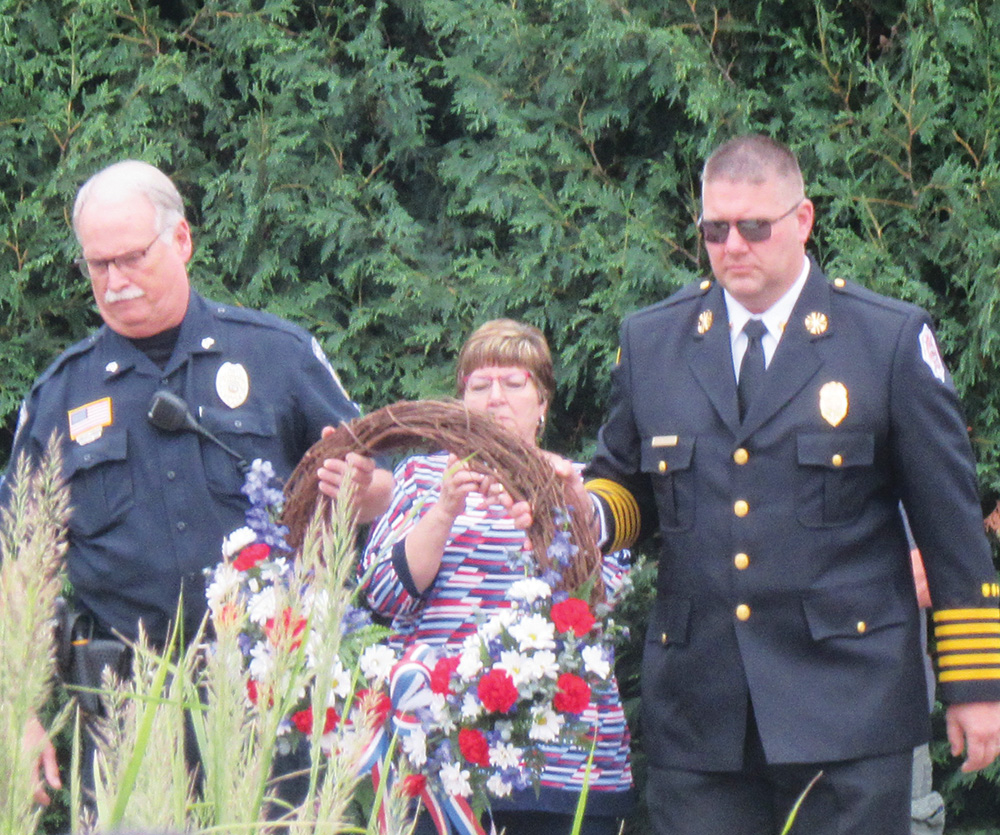 Photo by Karin Elton Marshall Police Sgt. Tim Tomasek and Fire Chief Quentin Brunsvold walk to lay a wreath on the World Trade Center beam Wednesday afternoon at Memorial Park, a park designed to memorialize the law enforcement, firefighters and medical professionals who helped the victims of the 9/11 terrorist attacks.

MARSHALL — Aaron Ziemer was just waking up, but went right into Marshall Radio when he heard the news. Tara Onken was a fifth grader reading a book. Brad Gruhot was driving in Edina and saw long lines at the gas station. Craig Schafer remembers long lines in Marshall, too.

“People were filling quart jars with gas,” he said. “I don’t blame anyone for being afraid. I was afraid too.”

All, of course, were talking about where they were on Sept. 11, 2001. A large group, including a class of third graders from Holy Redeemer School, gathered Wednesday at Memorial Park around the 9/11 Memorial to remember the anniversary of that scary and uncertain time of when hijacked airplanes were forced to crash into the World Trade Center and Pentagon, killing almost 3,000 people and injuring over 6,000 others. Additional people have died of respiratory diseases in the years following the attacks.

Before saying a prayer, the Rev. Lyle Snyder asked the crowd to tell the people standing next to them where they were and what they were doing that day on Sept. 11, 2001.

Marshall Economic Development Director Tara Onken told the people around her she was in fifth grade that day.

“I was reading a book and then the class went into the teachers’ lounge and watched, watched it all go down,” she said.

“I was waking up, and I flipped on the TV and I saw what was going on and I got dressed and ran to the radio station,” said Aaron Ziemer, now the news director at Marshall Radio.

“I was on my way to work and I worked in Edina and driving past the Macaroni Grill and turned on WCCO radio,” said Brad Gruhot, director of the Marshall Area Chamber. “There was all kinds of price gouging and the lines to the gas stations were a mile long.”

After everyone had had a chance to share where they were that day in 2001 — except for the third graders — Snyder asked when people had forgiven the hijackers.

There was mostly silence.

“I can see that about 50 percent haven’t forgiven them yet,” he said.

After Mayor Bob Byrnes made welcoming remarks, including telling the crowd about the stakes they see in the arbor vitae — “that is for the next expansion of Memorial Park which could start as early as next week, depending on when it dries up” — he introduced guest speaker Marshall City councilman Craig Schafer, who was instrumental in acquiring a beam from the rubble of the World Trade Center in New York City.

Schafer spoke of the fear and uncertainty of that day and of his awe of the Flight 93 passengers, “citizens who took action and said ‘no, not today.’ “

The flight crashed in a western Pennsylvania field after passengers tried to take control of the plane from hijackers.

He spoke to the third graders knowing that they might feel about 9/11 the way he used to think of Pearl Harbor 1941.

“Sixty years from now you can come here with your grandchildren and tell them about what happened that day,” he said.