50 years of selling Chevrolets in Canby

Cleveland Chevrolet celebrates a half century 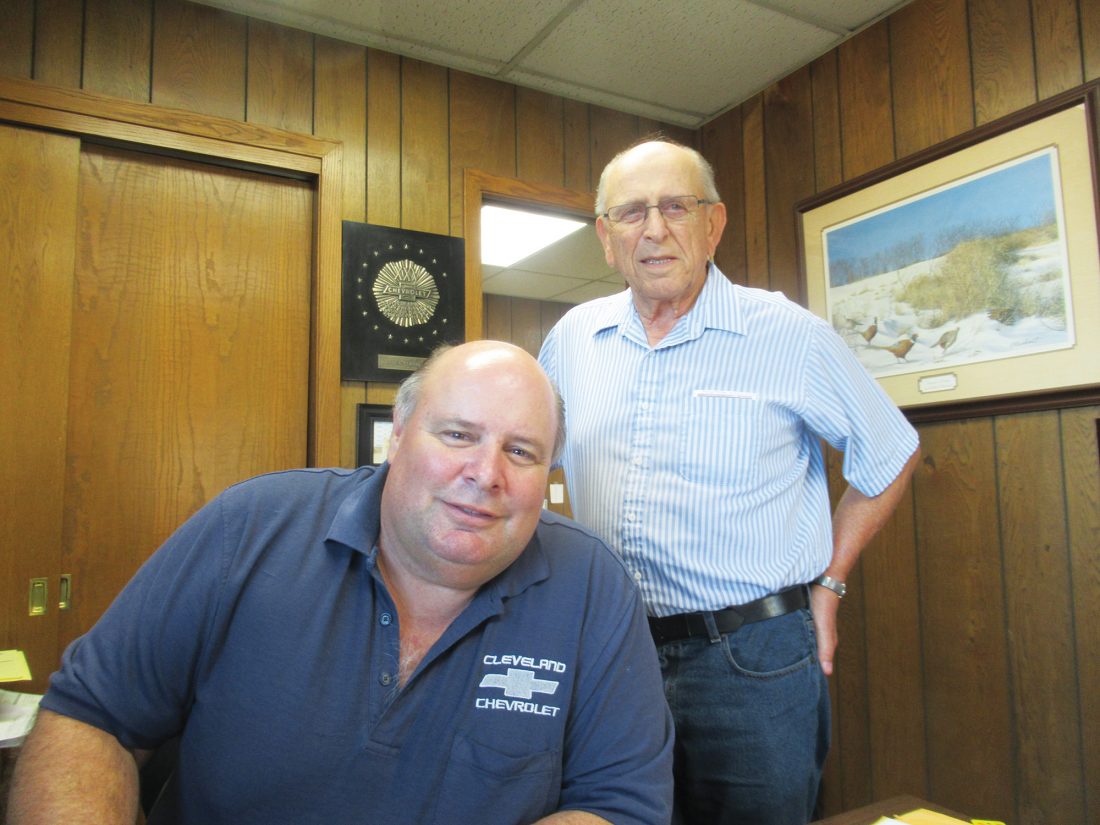 Photo by Jim Muchlinski Jim and Lon Cleveland have operated Cleveland Chevrolet in Canby for 50 years. For most of that time, they’ve been located along U.S. Highway 75 on the north edge of town.

CANBY — Jim and Lon Cleveland have more than 50 years of experience in the car sales businesses, and all of it has taken place in Canby.

Their Cleveland Chevrolet dealership on the north side of the city along U.S. Highway 75 has had 50 years of success with popular Chevy models like the Impala, Camaro, and Silverado. An all-day anniversary open house is planned Thursday at the dealership show room.

The half century’s worth of car sales began to take shape in the early 1960s as Jim Cleveland was looking for a job opportunity that would offer career potential. He decided to work at one of the six car dealerships in Canby, where he at first specialized in accounting.

Before long he was also helping with other components of the business such as inventory and sales. When the previous owner decided to retire for health reasons, he had a first option to purchase the business.

“He told me I either had to take over or he was going to sell,” Cleveland said. “I thought I might as well give it a try.”

The decision was a good one.

“It’s worked out all these years,” he said.

He’s seen many different car and truck trends. One of his first was station wagons, which became a popular family car until the late 1970s energy crisis.

Many times economical fueling has been weighed against the value of extra room for passengers and cargo. From the 1960s, when many farms still included egg production, he remembers how one buyer sized up a car by estimating how many egg crates it could hold.

Both then and more recently, he could tell within a minute of conversation which types of vehicles seemed best suited to each particular buyer.

“They come into a dealership knowing that they need a car,” he said. “They also know what features they need most. That’s a good starting point for helping them to choose something they’ll be proud to own.”

At first the dealership was located in the Canby downtown business district near the high school. In 1973, Jim opted for the current location because of its highway frontage and larger lot size.

At first he would typically have about 25 cars on the lot. The total has grown over the years, to the point that Lon now stocks about 30 new vehicles. When used cars are figured into the total, his inventory typically ranges from 60 to 80 cars and trucks.

Lon became involved in the business much the same way his father did. His experience dates back to work during high school. He chose the business over other potential opportunities that followed completion of his business and economics degree at South Dakota State University in Brookings, S.D.

He said he’s been able to stock a full range of Chevy models, and still keep the personalized service that customers consistently appreciate.

“We want to make everything as hassle free as possible for the buyers,” Lon said. “It’s an easy one-step process. They can look at different possibilities and decide what best meets their needs. Then we’ll look at the financing.”

Buyers of new vehicles have the full set of General Motors incentives and services. They remain important since car costs, like those of most other consumer goods, have seen steady long-term increases.

They said they owe much of their success to capable employees and loyal customers. Some of their employees have taken jobs at the dealership after they completed automotive training at Canby’s Minnesota West campus and then stayed for most of their careers.

Customers include people living in the Canby area, as well as some who travel from longer distances. A significant percentage have bought almost all of their cars at Cleveland Chevrolet.

“We have customers come back to us because they have family ties to Canby, and sometimes even if they don’t have family living here anymore,” Lon said. “Repeat business is a very important part of what’s made us successful. If they’re happy with what we sell them, they’re likely to buy from us again.”

They noted that cars and trucks are a good reflection of changes in society. Ash trays are no longer built-in features, but cup holders are now an important standard. Drivers in the 21st century appreciate the comfort of recliner seats.

Lon said pick-up trucks and sport utility vehicles have become the preference of most buyers over four-door sedans. He expects their popularity to continue because they offer extra measures of comfort and a reputation for durability.

“They’ve been developed with energy efficiency in mind, but also the features that many of our buyers want most,” he said. “They have popular features that make many people willing to pay a little more for them.”

He said he learned a large part of his knowledge of the auto industry and business management through the daily routine at his family’s dealership.

“It’s really all about having a friendly, personable way of serving the customers,” he said. “I enjoy helping them decide which of our cars will serve them best. It’s a very important investment, and I want it to be one that they’ll like.”