Showing what they know

For 4-H members like Kestlyn Willert, livestock events can be about public speaking as much as raising animals 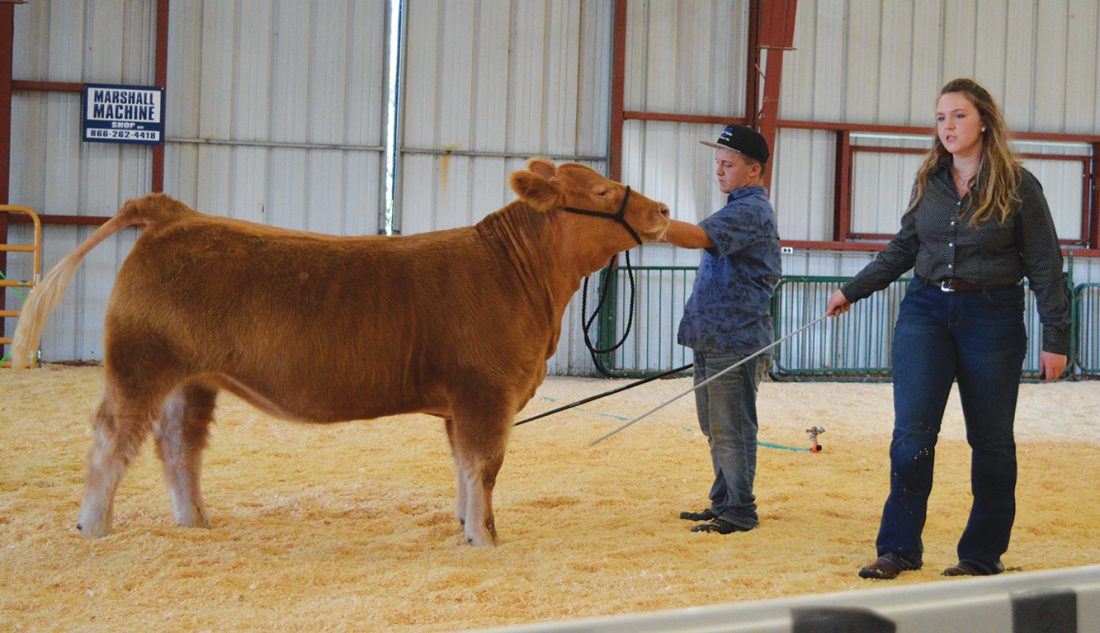 Photo by Deb Gau Kestlyn Willert, at right, pointed out areas on beef cattle that show signs of how much fat is on the animal’s body. It’s an important distinction, she said, because beef that’s marbled with fat has a higher quality grade.

MARSHALL — Some things you expect to see in the show ring at a county fair, like 4-H members leading well-groomed animals. Kestlyn Willert fit the pattern up to that point, as she stood near a heifer in the 4-H arena at the Lyon County fairgrounds.

What was different was the projector screen set up in the ring. This wasn’t an animal judging event — Willert was about to start a demonstration of how beef cattle are evaluated for finish.

“Finish is the fat on an animal,” Willert explained to the audience. “It matters because of a thing called quality grade.” Beef that is more “marbled” with fat receives a higher USDA quality grade, like USDA Prime or USDA Choice.

“It’s really nice because you get to incorporate two projects in one,” said Willert, a member of the Coon Creek Cheerful Workers 4-H club.

For her demonstration, Willert showed how to evaluate the finish on market beef cattle — and that was where the heifer came in. Willert pointed out different areas on the animal’s body, like the brisket, ribs and flank, that should ideally look full and smooth due to the amount of fat there. She also took questions from the audience and handed out pamphlets she wrote on the topic.

Willert said 4-H members doing livestock demonstrations pick their own topics related to livestock production. For her demonstration this year, she said she liked the topic because it was information that everyone can use. Demonstrations are also fun because of the audience interaction, she said.

“It’s honestly one of my favorite projects to do at state level,” Willert said. With the number of people attending the Minnesota State Fair, livestock demonstrations can get a large audience, with lots of people asking questions.

It’s also to “really nice” to have feedback from 4-H judges on your demonstration, Willert said. She said getting that kind of feedback, and working on projects like demonstrations, has helped make her a better speaker over the years she’s been in 4-H.