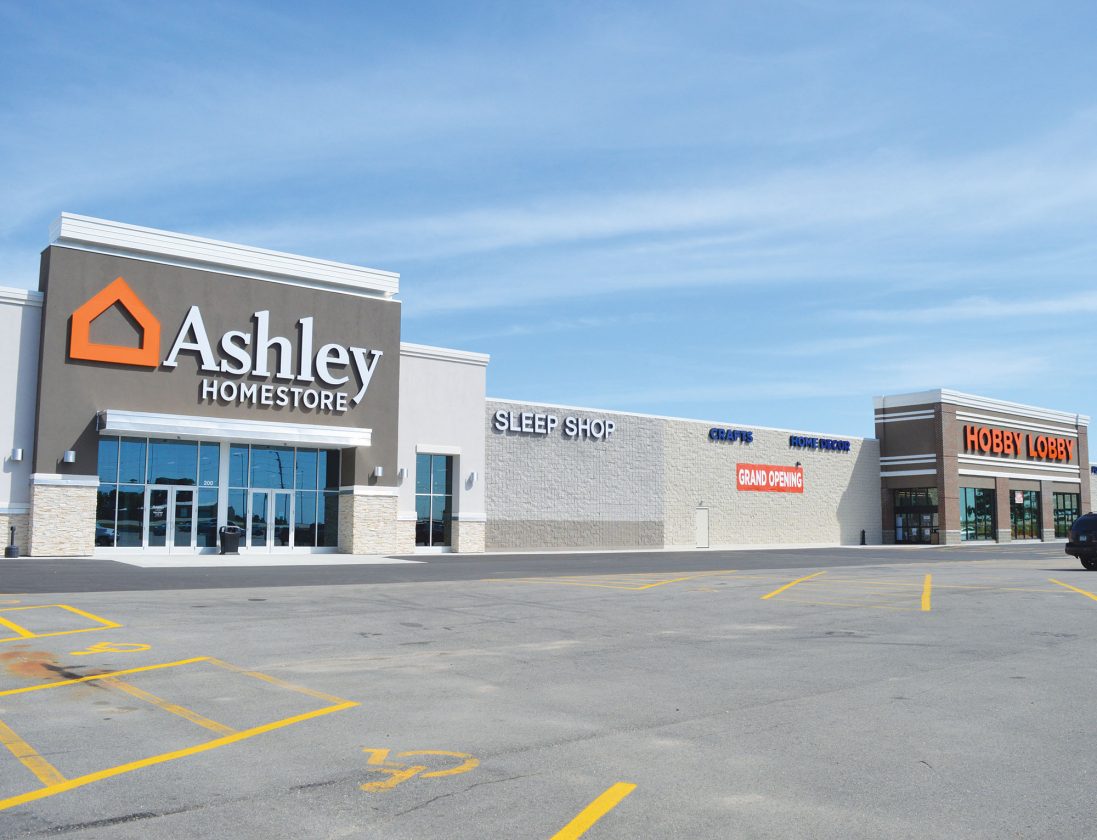 Photos by Deb Gau Two new businesses, the Ashley HomeStore and Hobby Lobby, opened this week in Marshall. The two stores renovated space inside a building that used to be the Marshall Kmart location

MARSHALL — It’s been a big week for the former Kmart building in Marshall, with two new businesses opening there within a few days of each other.

A new Ashley HomeStore held its grand opening on Tuesday, while Marshall’s new Hobby Lobby location in Marshall kicked off a soft opening on Friday.

In some ways, having the new stores open in Marshall is unusual — but area businesspeople and local officials say factors like Marshall’s location and status as a regional hub, as well as other retail trends, have helped make it possible.

“This is one of the smaller markets that Ashley HomeStore is in, especially if you look at population alone. This is the smallest market that Hobby Lobby is in, and that says a lot about Marshall,” Onken said. Before investing in a new store location, companies took at factors like population and traffic counts, a city’s pull factor, and more, she said.

And many of those factors seem positive for Marshall, the EDA said. According to a University of Minnesota Retail Trade Analysis report, taxable retail and service sales in Marshall increased 33% between 2009 and 2016, without inflation adjustments. Statewide taxable sales increased 11.3% over the same time period. In 2016, taxable sales in Marshall reached a total of about $196 million.

The University of Minnesota analysis also said Marshall had a “pull factor” of 1.56 in 2016, meaning that the city is generating 56% more in sales than expected based on its population.

Having a pull factor higher than 1.0 shows people are traveling to Marshall to shop. Marshall also draws workers and students from surrounding communities.

“We do see it as kind of a regional hub,” Kovash said of Marshall. In addition, Marshall’s location helps extend the company’s reach in southwest Minnesota, said Kovash and Kayla Sifferath, senior marketing manager for Furniture Mart USA. Marshall might be a more convenient shopping destination for customers who live farther away from Furniture Mart USA’s stores in Sioux Falls or Watertown, S.D., they said.

There are currently 13 Ashley HomeStores in Minnesota, Kovash said.

Retail stores in Marshall have gone through some big shifts over the past 30 years or so, said Marshall Mayor Bob Byrnes. If you were to look back to more than 30 years ago, he said, Marshall had more but smaller local businesses.

“Then, we saw the transition to some of the big box stores,” he said.

As time went on and online shopping options grew, Byrnes said, big box stores faced their own challenges. Marshall has seen some of those stores, like Shopko, close for reasons that had to do more with company-wide business decisions than the success of the local store, Byrnes said.

Now, some of the retail trends in Marshall are toward more specialized products and services, “That aren’t really available in multiple places.” Other factors, like Marshall’s growth as a regional hub, have also affected retail in the city, he said.

One strategy that retail businesses are following is to offer products that customers can’t find elsewhere. At the grand opening of the Ashley HomeStore in Marshall earlier this week, Furniture Mart USA owner Bill Hinks said that was one of the positives about having Hobby Lobby next door to the HomeStore location. Hobby Lobby controls the production of many of the items it sells, so they’re not available anywhere else, he said.

Offering unique products and experiences is something that local small businesses are also doing in Marshall.

“The boutique market is still there,” said Brad Meulebroeck, of Coleman Management in Marshall. Meulebroeck said occupancy of the commercial properties Coleman manages in Marshall’s downtown is currently close to 100%. Boutique stores and small businesses like the Mainstay Cafe on Main Street offer a different experience, and attract a different base of customers than chain restaurants or big box-style stores, he said.

Having new businesses like Hobby Lobby and Ashley HomeStore in Marshall was a positive thing, especially when they could rehabilitate a large vacant building like the former Kmart, Byrnes said.

In addition, Onken said, new businesses have an impact beyond retail and job creation. New businesses generate more tax revenue, revitalize or expand parts of the community, and spend money locally for things like snow removal and yard care, she said.

Marshall Area Chamber of Commerce President Brad Gruhot said having more options for shoppers encourages people to come to Marshall and go to other businesses.

“We have several reasons that people come to Marshall already. We have great shopping options,” including businesses downtown, along College Drive, along Minnesota Highway 23, and the “big box” stores on the south edge of town, Gruhot said.

“Ashley HomeStore and Hobby Lobby only strengthens that,” he said. “While people are in town shopping at stores like this, why not also check out the rest of Marshall and what it has to offer?”