SMSU’s annual Smokefest brings together a community of BBQ lovers 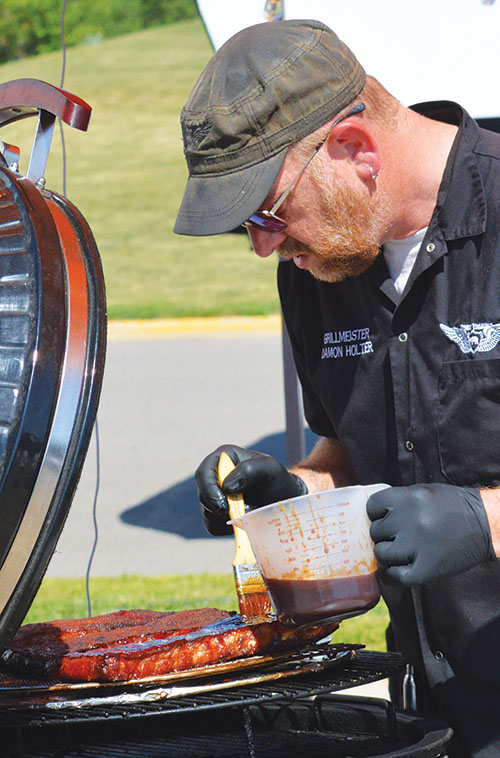 Photo by Deb Gau Damon Holter, one of the competitors at SMSU’s Smokefest on Saturday, brushed BBQ sauce on ribs he was making, as the clock ticked down closer to judging time.

MARSHALL — The smells in the air on the Southwest Minnesota State University campus were tempting, but it wasn’t time yet for anyone to relax and enjoy the barbecue. The clock was ticking, and teams in the Smokefest BBQ competition were in action, trying to put together the perfect servings of barbecued chicken, ribs, pork and brisket.

“We’re getting close to turn-in time,” said Brian Brandt, a member of Mustang Sally, one of the local teams competing at Saturday’s event. In just a few minutes, competitors would be lining up to turn in plain white containers of barbecue for judges to taste.

A total of 46 teams took part in the competition this year, said Ty Dennis, athletic development and marketing assistant at SMSU.

“Forty-six teams is an awesome number to have,” Dennis said. Competitors ranged from first-time Smokefest participants, to veterans who have come back for 10 years.

Smokefest is a competition sanctioned by the Kansas City Barbeque Society, and this year’s event drew teams from as far away as Canada, as well as Iowa and North and South Dakota. But local competitors have been a regular part of the contest, too. On Saturday, SMSU President Kumara Jayasuriya went from being a spectator to a volunteer after the local Sons of Butchers team invited him to help carry a box of barbecue to the judging station.

“Now you can say you’ve turned in a barbecue entry,” team members said.

For Jayasuriya, getting “recruited” by the team was unexpected but fun.

While the Sons of Butchers has traveled to compete in BBQ competitions in the past, team member and SMSU vice president for advancement Bill Mulso said Smokefest was the first competition their team has done this year.

“It’s fun to be back out here. We know some of the teams,” Mulso said.

Dennis said the SMSU community is part of what makes Smokefest a fun event. While some competitors, like Mulso, have ties to SMSU, university staff and students also work to help make the event run smoothly.

“The wrestling team helps out with turn-ins and hospitality,” Dennis said. And university electrician Toy Schreurs made sure the competition, which filled a parking lot with trailers and RVs, had the outdoor power hook-ups it needed. “Without him, we wouldn’t be able to do this.”

The atmosphere at Smokefest is one reason people keep coming back, Dennis said.

“Teams like the change of environment, being on a college campus,” he said. “There were eight teams that showed up on Thursday night,” although the barbecuing doesn’t really start until Friday night.

Although they may have traveled a long way to get to Smokefest, competitors said getting to spend time with other barbecuers is a big part of the fun.

Scott and Pam Thomasson, who were competing on the Pigtamer BBQ team from Moorhead, said they had taken part in nine barbecue contests this year.

“It’s been about a couple of years since we’ve been here,” Scott Thomasson said. But in spite of all the travel, competitive BBQ was fun to be part of. The Thomassons said getting to know some of their competitors has been one of the best parts.

“It’s great,” Thomasson said. “It’s the friends we have. It’s like family.”