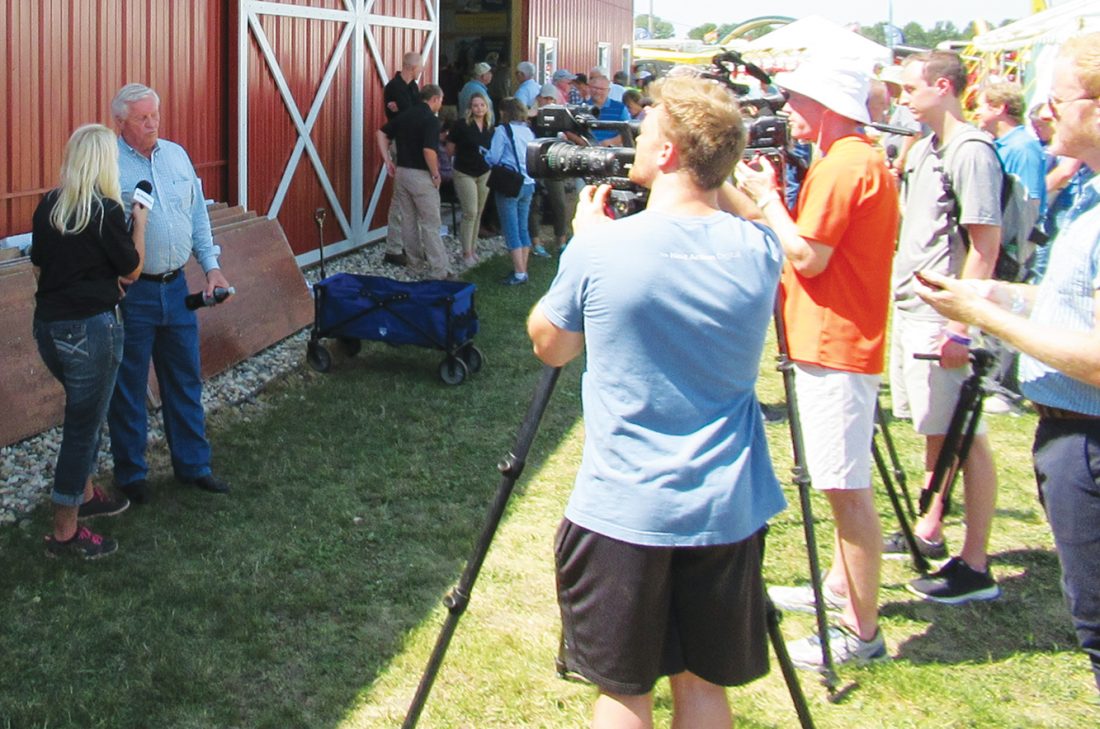 GILFILLAN ESTATE — Every August a thriving agronomy-based business district goes up in less than a week at the historic Gilfillan Estate on U.S. Highway 71 in eastern Redwood County.

Farmfest 2019 was filled with steady foot traffic from early morning hours after sunrise until late in the afternoon.

“We’ve had a very nice crowd,” said Runnings Director of Marketing and E-Commerce Dennis Jensen. “We’re very happy with the sales at Farmfest. It got off to a strong start on the first day, and it helped to have good weather throughout the event.”

Runnings offers a full range of retail goods geared toward farmers and others with an active outdoor lifestyle. It has 45 store locations, most of them in the Upper Midwest. Several newer sites are situated in rural areas of Northeastern states.

Jensen said both the retail product line itself and competitive pricing have helped Runnings to reach profit margin goals even with uncertainties in the farm economy. It could be influenced by indefinite prospects for world trade, as well as supply and demand factors resulting from a historically cold, west spring.

“We know the challenges our customers face,” he said. “It works to our advantage that much of what we sell is in the category of goods most people consider necessary. Almost everyone needs durable clothes. Anyone who has animals needs the right kind of supplies to take care of them.”

The show wrapped up Thursday, following an opening day with a state policy forum led by Minnesota Gov. Tim Walz and then a federal counterpart on Wednesday that was chaired by Minnesota Democratic Rep. Collin Peterson and featuring U.S. Secretary of Agriculture Sonny Perdue.

Its large but easily navigable grid of square blocks contains many of the best-of-the-best vendors of large and small products useful to the farm sector. Plenty of information is available from each of the different vendors.

There’s also ample opportunity to talk with farmers themselves at the booths of farmer-based organizations such as the Minnesota Pork Producers Association and the Minnesota Soybean Growers Association. Researchers from agencies like the University of Minnesota Extension Service are also on hand to share data from their most current research projects.

Greg Boerboom, a pork producer in Stanley Township, Lyon County, and also the current MPPA state president, said visitors to the organization’s tent ranged from those with extensive pork industry knowledge to others with limited familiarity who wanted to learn more about hog production.

“Farmfest is designed for everything ag,” Boerboom said. “This gives us a way to talk about the pork industry in particular. It’s well worth the time, both for people who attend Farmfest and for us.”

He said two frequent topics that were brought up in conversations this week were world trade issues and how to protect livestock herds from health concerns, particularly African Swine Fever.

“We’re letting everyone know about what we’ve done to be as prepared as possible,” Boerboom said. “We’ve looked at what steps should be taken to deal with it if it shows up the United States.”

A similarly wide variety of questions and feedback could be heard nearby at the Minnesota Soybean Growers Association tent.

Gerry Gertz, who helped with the MSGA booth as a farmer from the Jasper area between Pipestone and Luverne, said traffic remained steady during Farmfest. Overall, he estimated that attendance at the booth was at least average and probably slightly above average.

He said there was strong public interest in new statewide initiatives that could expand the economic role of the state’s soybean output.

“People are interested in finding out what the soybean association does,” Gertz said. “Farmer members want to learn more about what it’s done for them. It’s a very good chance for us to explain our goals.”

He added that one of the best developments statewide for the soybean industry is approval for a $5 million grant to establish a new innovation center in Crookston. An ongoing goal is to carefully monitor legislative developments that might affect the amount of unnecessary regulation placed on soybean operations.

Farmer Edwin Lenort of Silver Lake Township in Martin County south of Fairmont, one of many crowd members at Farmfest 2019, said he divides his time among many different locations.

He stopped by the forum tent to take a break in the shade on Wednesday well ahead of the federal farm policy forum’s starting time, then moved on to spend at least a few more minutes seeing displays.

“I attend Farmfest every year,” Lenort said. “I’m interested in anything and everything. Some it’s all talk. I also come across other ideas that sound pretty good.”