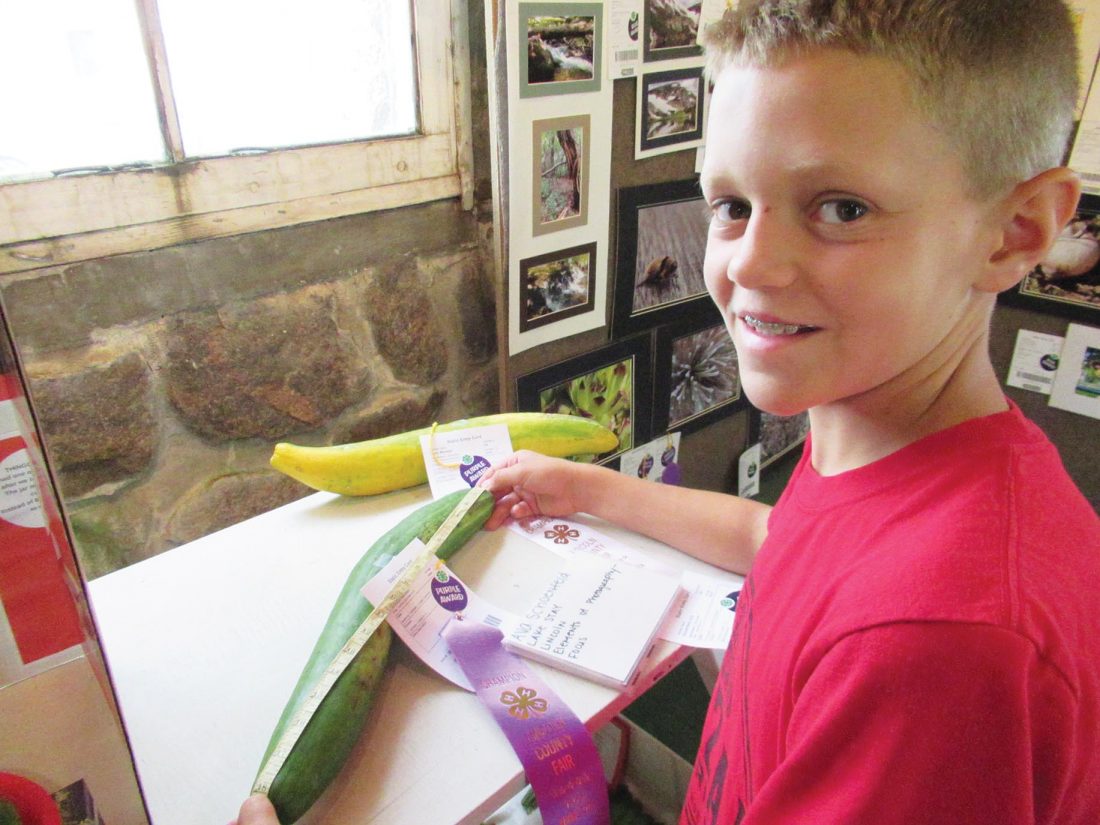 Photo by Jim Muchlinski Lincoln Jerzak, a 4-H member whose family farms north of Ivanhoe, had success with his 2019 gardening projects, including this 18-inch cucumber.

TYLER — Plastics have graduated from being a huge modern convenience to also posing ecological issues, according to one of the Lincoln County 4-H general project exhibits scheduled to be shown at the Minnesota State Fair.

Ivanhoe Greenleaf club member Samantha Landrus, who will be an 8th grader this fall at Minneota Public School, chose to take her project based on plastics to state competition. It was one of several she could have chosen as her state fair entry based on 2019 Lincoln County Fair results.

Part of her research involved long term projections of the amount of plastic that gets discarded as solid waste. Since many plastics are slow to decompose, they can remain for years as waste either in landfills or in natural ecosystems.

Projections show that within 10 years many bodies of water will have about one pound of plastic for every three pounds of fish. Using the same timetable, the weight of plastic could exceed that of fish in at least some locations by 2050.

“It’s important not to use too much of it,” Landrus said. “Sometimes reusable bags are the best choice. Other good ideas are to have less plastic packaging and to use fewer disposable plastic items like eating utensils.”

Landrus also earned awards for projects based on Eurasian Water Milfoil and airplane travel tips. She explored ways to help prevent the spread of milfoil to new lakes, and compiled a list of 10 basics for having the most comfortable and safe plane ride possible.

After a recent trans-Atlantic flight for a vacation in Germany and France, her third air voyage altogether, she said clothing selection is the tip that passengers seem to overlook more than any other.

“It’s important to dress sensibly,” she said. “If someone’s clothing isn’t comfortable and makes it difficult to move around, the whole plane trip will be harder to enjoy.”

Landrus’s older sister, Katie, also based a project on the family trip to Europe. Currently entering her senior year at Minneota High School, she researched ways customs are different in Germany than they are in the United States. They were used as a basis for tips on how to relate well to others in everyday situations while being a tourist.

Katie Landrus also entered a project that grew out of how one of her grandfathers underwent heart surgery 17 years ago. She explored the value of organ transplants and organ donation.

“I enjoyed learning about the myths and facts,” she said. “I found that one of the biggest myths is that older people are too old to donate. Many times the person’s age is not an issue.”

Their younger sister, Grace, who will be a sixth grader this fall at Ivanhoe Elementary School, chose two very different animals, the possum and the cheetah, as 4-H project subjects.

The possum was chosen because it’s found almost everywhere in Minnesota, eats a wide variety of items depending on availability, and co-exists easily near humans. Although the cheetah is only found in Africa and Asia, she chose it since she loves cats. Part of her 2019 Lincoln County Fair involved competing with her cat in the cat show.

Another topic that factored into Grace Landrus’s 4-H fair season was preparation for possible emergencies, such as a Midwestern tornado. She put together a supply box based on web site research, which included finding out that one rule of thumb is to have three gallons of water for each person to last throughout a three-day period of maybe having to wait for a rescue.

He entered a cucumber that reached a show length of 18 inches, larger than most cucumbers at the time someone harvests them but not as long as the length most varieties can potentially reach. Even with a late, wet spring, his garden work at the family farm north of Ivanhoe led to the 18-inch entry as well as a large assortment of vegetables for the garden box competition.

“It turned out all right this year for something like cucumbers,” said Lincoln’s father, Jeff Jerzak, who has some prevented planting crop acres due to weather issues. “They just kept growing because of the wet conditions. I’m hoping it also works out with our field crops, that I get a late frost and a reasonable amount of corn and beans.”