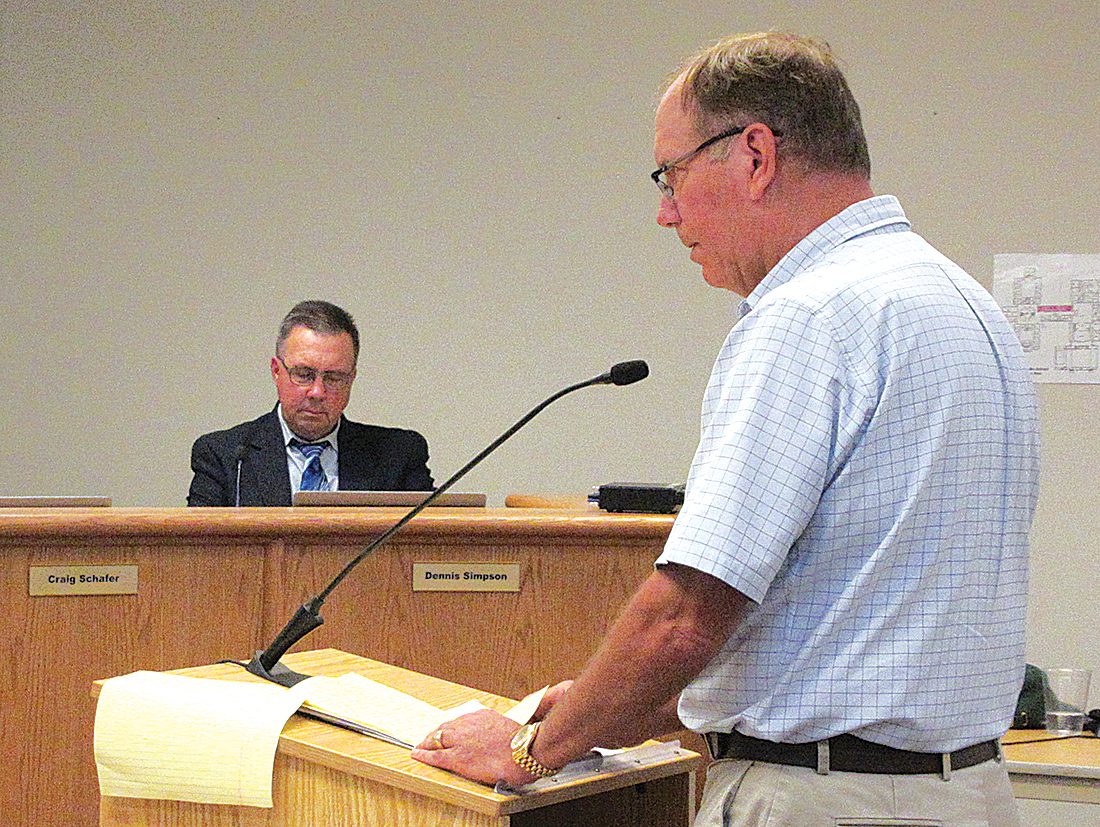 MARSHALL — What city staff members called a “procedural step” toward financing renovations of Marshall’s city hall building turned into a longer discussion at a public hearing Tuesday. City council members went back and forth over how high to set a maximum amount for capital improvement bonding on the project, and after a couple of failed motions set the maximum principal at $6.5 million — an amount $1.5 million lower than staff proposed.

If the council authorized the issuance of bonds not to exceed $8 million, it did not mean the city was obligated to bond for that much, said Marshall City Administrator Sharon Hanson.

“It is setting the table for two bigger decisions to come in the future,” she said. The city would still have to decide whether to authorize bids for the project, and whether to accept bids.

The proposed bonding resolution also included other costs connected with the city hall project, like asbestos removal and temporarily relocating city offices. The actual cost of the building project was estimated closer to $6 million, Hanson said.

But some council members, as well as a member of the public, said they weren’t in favor of the $8 million maximum. It was too much, even as a cushion against high construction bids or other unknown costs, said council member James Lozinski.

The city of Marshall has been in the planning stages to renovate the current Municipal Building on Main Street for the past couple of years. The project would include putting in new heating and utilities in the building, as well as improving handicapped accessibility and bringing the building’s main floor down level with Main Street, Hanson said. There’s also the possibility of asbestos removal, and that the city may still have to demolish the vacant hotel building next door to city hall, she said.

The city is considering using capital improvement bonds to help finance the city hall project. In order to do that, the city would need to approve the project in a five-year capital improvement plan, with a maximum bonding amount as part of that plan, said Annette Storm, director of administrative services for the city. The resolution would need to be passed by at least five out of seven city council members.

“It’s a procedural step, in order to line up financing,” Hanson said. The city would have bids for the project back in late October, and at that point the council could decide whether or not to move forward with bonding.

Lozinski said he wasn’t in favor of setting the maximum bond principal at $8 million.

“I’m very uncomfortable with a $2 million cushion,” he said.

One member of the public, James Carr, also spoke out against the proposal.

“I think there needs to be a reality check,” on how the project would affect taxpayers, Carr said. Marshall is in the process of other major projects like updates to its wastewater plant, and there are also commercial properties in town that have closed down or owe back taxes, he said.

“I ask you to act responsibly,” Carr said. The council shouldn’t approve financing before they know the project’s price tag, he said.

Other council members, however, stressed that more delays weren’t going to help the city hall building, or the cost of fixing it. Problems with the building had been talked about since at least 2008, said council member John DeCramer.

“We’ve waited 10 years on this. Every time we wait, (the cost) goes up,” DeCramer said.