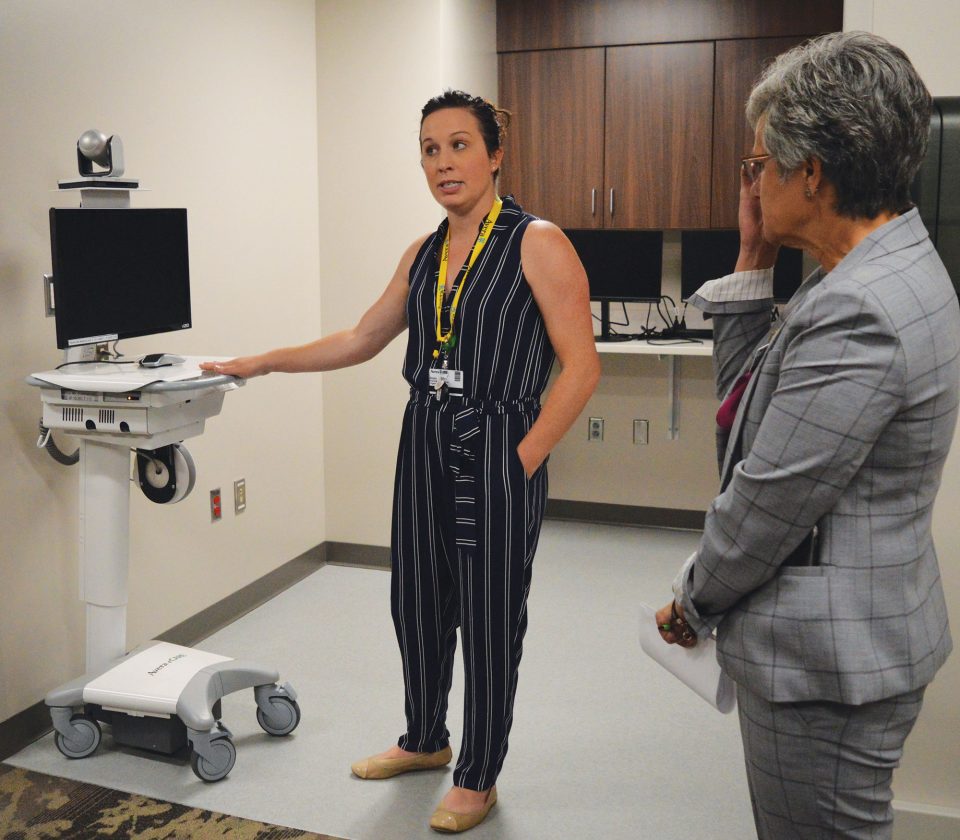 Photo by Deb Gau Above: Bobbi Jo Vandendriessche explained some of the features of the newly expanded Emergency Department at Avera Marshall Regional Medical Center.

MARSHALL — It had been a busy day for the newly expanded Avera Marshall Emergency Department — but not because of any medical crisis, however. On Wednesday, the new patient rooms and drive-through ambulance garage were being toured by a steady stream of people, including Avera Marshall employees, area emergency responders, and community donors who helped support the $6 million building project.

Emergency patients will start coming to the new facilities on Monday morning, Avera Marshall staff said. It will be an exciting step forward for patient care, as well as privacy and security, said Avera Marshall Regional Medical Center President and CEO Mary Maertens.

“There’s just more space. We did a pretty extensive study as to the numbers of patient bays we wanted to have,” Maertens said. One advantage of the new facilities is that they will double the size of Avera Marshall’s old Emergency Department. With the new Emergency Department, she said, there should be fewer people waiting for care.

The public is invited to tour the Emergency Department expansion today, from 10 a.m. to noon. A ceremony and a blessing of the new facility will be held at 11:30, Maertens said.

All together, the construction will bring the Avera Marshall Emergency Department to 10,540 square feet of space. The expanded department will have a total of 10 patient care rooms, including two trauma rooms.

“Every room here is private,” said Emergency Department manager Bobbi Jo Vandendriessche. The patient rooms are arranged around a central “core” area accessible to doctors and nurses. In addition to having individual patient rooms, the trauma rooms and the entrance from the ambulance garage are separate from the walk-in reception area.

“It’s going to make for a more seamless transfer of patients,” Maertens said, as well as allowing for additional privacy and safety for patients and hospital staff.

The new setup is also going to be more efficient, Vandendriessche said.

“We’re going to get people into their rooms faster, and we’ll have more rooms,” she said.

Being able to handle more emergency patients is important for Avera Marshall as a hospital with a Level III trauma designation, staff said. Avera Marshall is the only Level III hospital within 60 miles, they said. The Level III designation means the hospital has demonstrated an ability to provide care like resuscitation, surgery, intensive care and stabilization of injured people, and has 24-hour coverage by emergency physicians and prompt availability of surgical teams.

The trauma rooms and Emergency Department staff also have access to interactive video technology that can connect them with doctors at other locations, Vandendriessche said. In an emergency, having those resources can help make it possible to stabilize a patient without having to transport them away from Marshall.

Other new additions are focused on being able to transport emergency patients quickly and easily, even in inclement weather. The new drive-through ambulance garage is roomy enough to move a patient out of the ambulance indoors, and heated sidewalks leading to the hospital’s helipad will be a big help in Minnesota winters, Derynck and Vandendriessche said.

The Emergency Department expansions wouldn’t have been possible without community support, Maertens said. Donors funded 10% of the Emergency Department expansion, which translates to $600,000. The contributions included land donated by the Carr Family Foundation, and donations from emergency medicine physicians and trauma surgeons who contributed to the capital campaign.