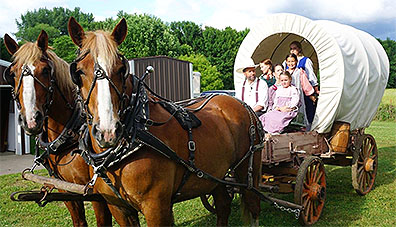 Submitted photo The 2019 Wilder Pageant starts this Friday in Walnut Grove. It will run this Friday and Saturday, as well at July 12-13 and July 19-20.

WALNUT GROVE — Three hundred is a big number. But when you realize it’s also the number of Laura Ingalls Wilder Pageant performances that area residents have made possible over the years, it carries some extra weight.

“It’s shocking and amazing,” Bill Richards said Tuesday, as preparations were underway for the Wilder Pageant’s 42nd season. Since the pageant opened in 1978, more than 300,000 people from around the world have attended it, and more than 1,000 people have been involved in putting on the production, organizers said.

It can be a little hard to grasp those numbers, even for people who have been with the pageant almost from the beginning, Richards said. But as one of the Walnut Grove area community members who have worked with the production for years, he’s seen how it brings cast, crew and audience members together.

“The people behind the scenes and the actors become community,” he said. Each summer when the pageant starts, “It’s like renewing old friendships.”

The production, which tells the story of the Ingalls family’s experiences as settlers in Walnut Grove, has also grown since the days of its early performances. Richards said pageant founders Al Farber and August Van de Wiele helped make the show what it is today.

“They had a bigger vision for it,” he said.

The pageant has had to overcome some obstacles since last summer when torrential rains and flooding closed the show for a week. The water washed away props, and caused damage to part of the outdoor set as well as the electrical system, Richards said. Over the past year, more than $40,000 worth of repairs and upgrades have been made, he said.

While the audience for the pageant has evolved over the years, Richards said, the story of the Laura Ingalls Wilder is still meaningful.

“It does have an impact on a lot of people,” Richards said. Laura’s story is one that gives hope in hard times, he said. It shows that with family and faith, people can get through it together.