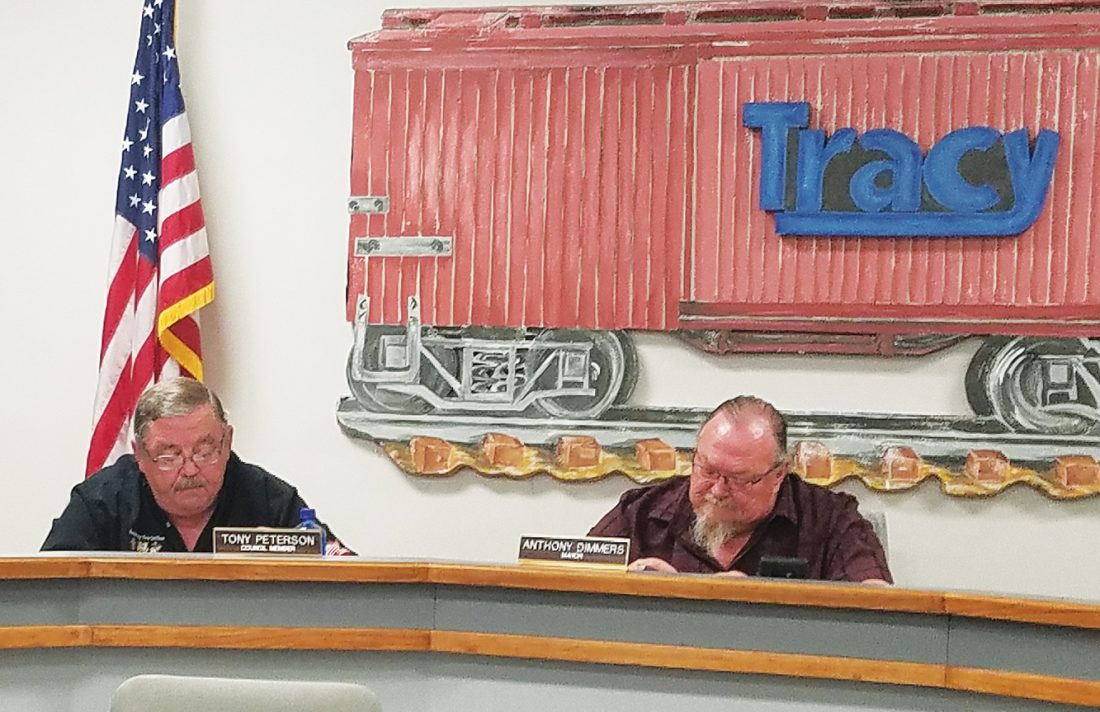 Photo by Mike Lamb Pictured are Tracy Council member Tony Peterson, left, and Mayor Anthony Dimmers during Monday’s city council meeting. Dimmers asked Peterson to abstain from voting on a agenda item due to an alleged conflict of interest.

“Ten years. Ten years I never … 10 years I have never lost my temper. Tonight, you are making me lose my temper,” Peterson said during Monday night’s meeting.

His statement was part of lengthy, sometimes emotional debate that followed Mayor Anthony Dimmers’ request that Peterson abstain from voting on an agenda item involving his employer who sits on the Economic Development Agency board. Dimmers told Peterson he had a conflict of interest on the agenda item because of his employment with Salmon Automotive in Tracy.

The agenda item called for a decision to hold a hearing involving allegations of misconduct by EDA board member Jeff Salmon. According to the memorandum prepared by City Attorney Matthew Gross, City Administrator Kris Ambeuhl received a written complaint from James Mattson that alleged Salmon made personal attacks against Mattson’s character and “sabotaged Mr. Mattson’s business and character.” Mattson requested that Salmon be removed from the EDA board.

According to Gross’ memorandum, Ambuehl conducted an investigation that discovered evidence that supported several allegations.

“The allegations on their face allege Mr. Salmon engaged in misconduct in the office. As result, the City Council can choose to remove Mr. Salmon from his position as EDA member,” the memorandum said. “If the City Council chooses to do so, it must provide a written notice of removal to Mr. Salmon and schedule a hearing to decide on whether the allegations of misconduct have been substantiated. Mr. Salmon must be given notice of the date and time of the hearing and a copy of the charges/allegations at least 10 days prior to the hearing.”

“I believe one exists,” Dimmers said. “The person involved is an employer.”

Peterson looked at Dimmers and said he disagreed.

“I would ask you to excuse yourself from involvement in this,” Dimmers said.

“I will have no financial gain one way or another. And I was put in by voters to vote my conscience to look out for the best interest of the city. I have been doing that for 10 years. I resent that fact that you assume that I have a conflict. I don’t know where you come up with that,” Peterson said.

“I would not impugn my integrity on such a manner that you are accusing me.”

But Dimmers said he was not accusing Peterson of anything.

“You have done nothing wrong. I have been advised by our city attorney that is the fear (conflict of interest),” Dimmer said.

The debate continued, with Peterson telling the mayor he had no authority to keep him from voting.

“You are aware that the failure to do so (not voting) constitutes malfeasance and could result in further action to include possible recall,” Dimmers said.

“Is that a threat?” Peterson asked.

“That is not a threat. It’s a fact,” Dimmers answered.

“It strikes me as a threat,” Peterson said.

Ambeuhl counseled board members that city code states that there is a conflict of interest because Peterson works for Salmon. He urged the Council to not allow Peterson to vote.

“You can table it and ask for more information to be presented, or you can, again, you can vote and censure Mr. Peterson. Realistically, those are the only options moving forward,” Ambeuhl said.

Peterson and others on the Council questioned why one member already received all of the evidence collected by Ambeuhl. The city administrator explained that the council member requested the information and it was emailed shorty after consulting with Gross. He said other members can get the information if requested, but he couldn’t include it in the agenda packet until a hearing was scheduled.

Peterson questioned the motivation of the proposed hearing.

“If I see that it’s all factually true, I’ll abstain,” he said. “But if I see we don’t have any investigation involved, and I see that this is a witch hunt, it is sour grapes from somebody — no I’m not going to abstain.

“There are things that have gone on over this whole situation that if you are going to bring out in public and chastise one, I intend to bring out the rest. So the ball is in your court. And let me tell you something, you probably don’t want to hear what I have to say. But I’m going to say it. Whether I have to walk out that door with my resignation on your desk and come back to that podium and say it, and that’s what I will do. That’s integrity. So how deep do you want to dig this hole?”

“To answer that, I bring up my integrity and my professionalism,” Ambeuhl said. “I received a complaint in my office. I acted upon it. I sent the information to the city attorney. It was justified by the city attorney to be serious enough to bring it to the council for review. That’s the facts.”

Schons assured Ambeuhl she was not questioning his integrity, but she was concerned with the “legal mumble jumble.”

“I trust your opinion and I will move forward with setting a hearing, but I think we need that information before the hearing. The EDA member deserves that information.”

The Council did vote on a motion by Schons to delay the vote to hold the hearing until the July 22 meeting. The hearing would be held on July 24 if the Council decided to go though with it.

The Independent reached out to Salmon by phone Tuesday. He said he doesn’t know anything about the allegations made my Mattson.

“I don’t know what the evidence is and was not presented with anything prior to City Council meeting,” Salmon said. “Honestly, I was never notified it was going to be on the agenda yesterday. I feel pretty sad the city administrator and the mayor primarily have chosen to go after a third-generation local business and family — major contributor to the community and volunteering to many things throughout the years.”