Taking on a challenge 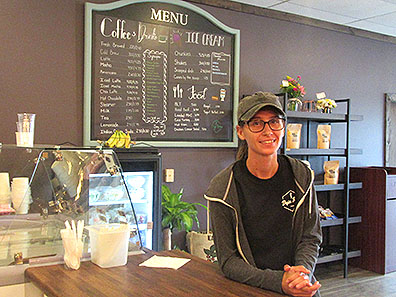 Photo by Karin Elton Sabrina Condelli is the owner of a new business in Tyler, the Deja Brew coffee shop Deja Brew is located at 180 N. Tyler Street in Tyler and is open from 6 a.m. until 6 p.m. seven days a week.

TYLER — It’s deja vu all over again. Tyler used to have a coffee shop in town, Break Time, but it closed a number of years ago.

Now there will be another place to enjoy a cup of freshly-brewed java on main street, Deja Brew, which had its grand opening July 22.

The new business is located in the former Pizza Ranch building.

Condelli and her family members, including her dad, John, and brothers Justin and Josh, helped her renovate the building. They laid down new flooring, installed lights, new paint, put in a bar — all without a whole lot of prior experience.

“We watched YouTube videos, read about it, looked at plans online,” she said. “There was some trial and error.”

The shop, decorated in muted grays and blues, seats around 35 customers, including a living-room type area with a couch, chairs, end tables and lamps and coffee table.

“We were going for a homey feel,” she said.

They put up a wall in the middle of the building. She plans to remodel the south half into a studio apartment for herself — but that’s down the road, maybe a year away. For now she is living in her hometown of Balaton.

Before further renovations, Condelli wants to settle into her new venture. Her dad, mom, Joann Condelli, brothers and Justin’s wife, Robyn, are helping behind the counter — free of charge.

“We split the tips at the end of the day,” Condelli said. The staff is wearing brown Deja Brew T-shirts. On the back it says, “A yawn is a silent scream for coffee.”

She plans to officially hire help within a month.

The espresso machine was a big, but necessary, investment. She sells Kool Beans coffee from the Kool Beans Coffee and Roasterie out of Brookings, S.D.

“They roast their own beans,” she said. “We pick it up every two weeks and grind the beans daily.” The manager showed them around Kool Beans and gave them a tutorial on coffee.

She offers fresh-brewed, lattes, mochas and Americanos plus lemonade and Italian cream soda.

There are cold and toasted gourmet sandwiches, BLTs and salads from a cooler or made to order. Ice cream includes shakes, cones and dishes with “chunky mix-ins.”

“The Italian sodas and lemonade has been popular,” she said.

Condelli, who was a paraprofessional at Lynd Public School for the last four years, was thinking about her next step in life when the building for sale in Tyler came to her attention a couple years ago.

“I originally thought about renting it out as commercial space and then thought of having a coffee shop,” she said.

The Russell-Tyler-Ruthton High School alum wanted a place where kids felt comfortable coming in to a buy an ice cream cone.

“When I went to school here, we would walk around, but there really wasn’t a place to just hang out,” she said.

Mike and Gail Johnston of Ruthton stopped by Deja Brew last week. Gail Johnston had a hot ham and cheese sandwich and a blue raspberry lemonade.

“It’s very good,” she said of the sandwich.

Mike Johnston had a bacon, lettuce and tomato sandwich and a bottle of water.

“It’s nice there is a place to eat downtown,” he said.

Condelli said the community has been “very supportive” of her new venture and “other businesses have been helpful.”

Her goal was to open before Aebleskiver Days, which is the last weekend in July, and she’s glad she was able to that. She has enjoyed her new role as an entrepreneur.

“It has its challenges, but it’s been fun,” she said.

US stocks stall out following Asian sell-off on virus fears