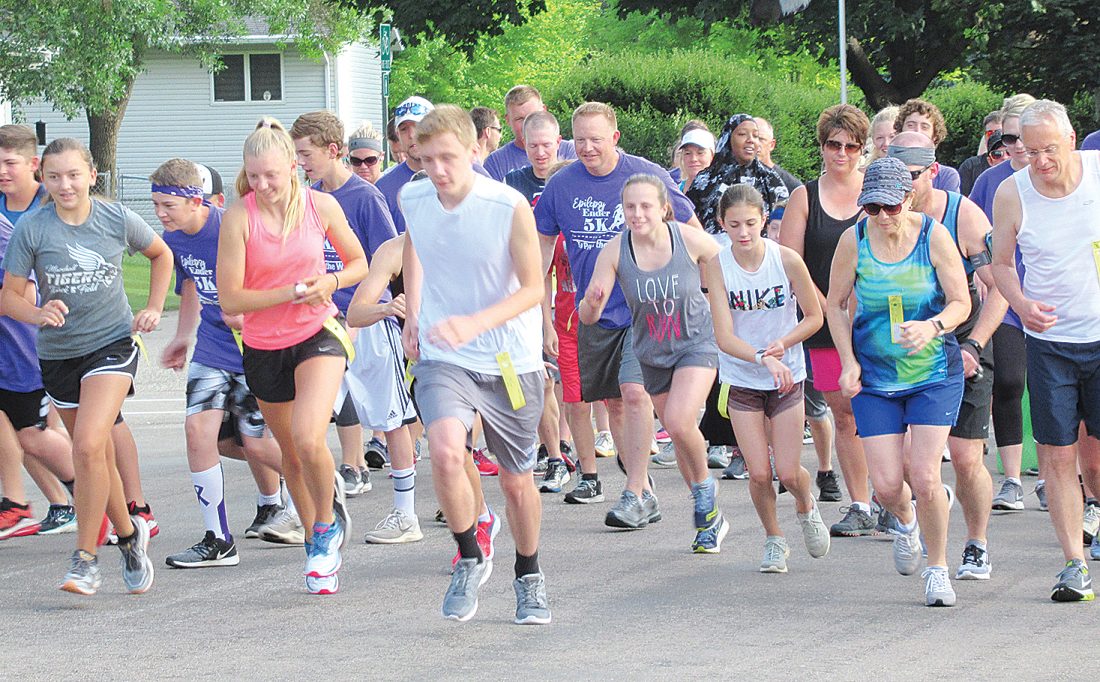 Photo by Maureen Ndubuisi Participants in the Epilepsy Ender 5K Run/Walk star off Saturday morning after Jackie Turner gave the countdown to begin.

MARSHALL — Jackie Turner’s brother Grant has epilepsy, and this last year had been hard for him.

“Last year, my brother, Grant, who has epilepsy, had a tough year just having more frequent seizures. So, I’ve been thinking for years I would love to do a 5K for epilepsy, because I love running. And then, we knew doing a 5K would raise support for epilepsy, so finally last year when his seizures became more frequent, I was like yes, let’s do this,” said Turner.

That led the Marshall resident to put on the first-ever Epilepsy Ender 5K Run/Walk Saturday at Independence Park.

Turner said that she got a lot of help from Brian Leibfried, and Dave and Marie Sample, teachers and cross country coaches at Marshall High School.

“I used a little bit of my running background, and then honestly the Internet. Brian Leibfried, he was one of my cross country coaches in high school, and used a bunch of resources,” said Turner. Turner said the route was the same route that the M club uses for the Tiger 5K in August this route starting and ending at Independence Park.

Turner said that the first 5K run and walk for epilepsy brought the community of Marshall together with over 100 people attending.

“Happy doesn’t even describe it, I am so pumped. I am just blown away with how many people there are, just so encouraged by it,” said Turner.

According to Turner, many members of her family and friends came to support and participate in the Epilepsy Ender 5K Run/Walk.

“My immediate family, cousins, uncles, aunts, grandparents, nieces, nephews, the whole family and so many friends and people I don’t even know,” said Turner.

“I came today to support my friend Jackie, her brother has epilepsy and this is for a good cause. I came here with my sister. There’s a lot people here so I’m glad that everybody came out to support,” said Fadumo Ismail, a friend of Turner’s from high school who walked in the 5K.

According to information from the Epilepsy Foundation of America, its mission is to stop seizures, find a cure, and overcome the challenges created by epilepsy through efforts including education, advocacy and research to accelerate ideas into therapies. Turner said that all the money raised from the 5K will be going to the Epilepsy Foundation of America in hopes to help their mission and programs they offer.

Turner said this will not be the last Epilepsy Ender 5K Run/Walk and that she hopes to put it on again next year.

“I had no idea prior to today what it would be like, but after today I would love to make it annual thing,” said Turner.

“Seeing how many people were willing to help, like the servant hearts of people. Just being together with everybody, knowing that it’s so much bigger than a race itself,” said Turner.

If you missed the race this weekend you can still donate to the cause on the sign up website at https://runsignup.com/Race/Donate/MN/Marshall/EpilepsyEnder5kRunWalk or directly to the Epilepsy Foundation of America at https://www.epilepsy.com/.