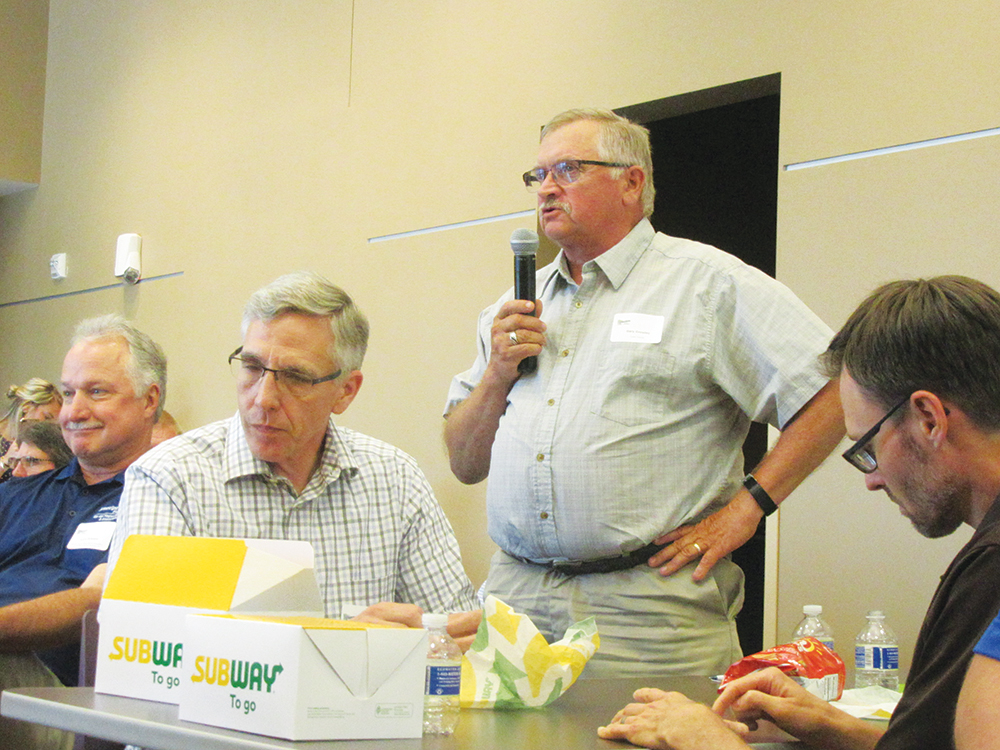 Photo by Sabrina Pankratz Gary Crowley asked the agricultural panel a follow up question about whether cost of production in agriculture is keeping people from expanding their farms.

MARSHALL — Concerns about the effect of tariffs and African swine fever were high at the second annual AgriBusiness State of the Agriculture Panel on Tuesday at the Marshall Lyon County Lilbrary.

In the long term, we gave China the last year to figure how to not buy U.S. soybeans,” Joel Wiering, a panel member, said.

“Honestly until we get some sort of trade agreement done with China, base’s (levels) is going to remain defensive locally. So, to put it in perspective, normally we export 50-60 percent of our beans and that all goes to the Pacific Northwest on a boat and the last five years to China. This year we exported 15 percent of our beans, and this upcoming year I expect that to be less,” Wiering said.

Greg Boerboom, a panel member, said pork is another product that being affected by the tariffs.

“I think China is finding a new spot to buy pork. They are buying a lot of pork right now from the European union. I think that is up 34 percent, so far this year from previous purchases,” Boerboom said.

“I think it will be hard for the U.S. to get back in to the China market once the trade war has ended and tariffs have been lifted,” Boerboom said.

“It’s been huge. If you get a group of pork producers in a meeting like this, the number one topic among everyone is concerned in both U.S. and Canada is ASF,” Boerboom said.

Boerboom said that China doesn’t have very good statistical records on agricultural, or that they keep their records to themselves.

“So, the rumor and the story is anywhere from 20-50 percent of China’s pig population is gone and most of the economies that are talking now are talking closer to 50 percent. To put that in perspective, China raises well twice as many pigs as pretty much anywhere in the world,” said Boerboom.

Boerboom said that if China has lost 50 percent of its pig population, that is a quarter of the world’s pig production.

“It really impacts us as a great opportunity. If it were to come to the U.S. that’s the biggest concern when you get pork producers from U.S. and Canada together. Twenty-six percent of our pork is exported and with ASF exports are halted immediately,” said Boerboom.

Other highlighted topics included preventive plant insurance. Boerboom said that people are receiving their preventive plant checks now, which is earlier than they typically receive cash flow from selling their crops.

Concerns of a pending farm crisis was brought up near the end of the panel and if what happened during the ’80s farm crisis will happen again.

“One of the big things I’m concerned with is we talked about the average age of a farmer being 55, and typically when you see some sort of farm crisis, you see a large consolidation. And, I think we’ll see that as that older generation of farmer just retires and realistically there is very poor succession planning going on in the farming industry right now,” Wiering said.

“Instead of 13 percent more money we got 100 percent more cash creation in the last 10 years. So, how that affects the market long term, I mean that’s a long term issue. The short term issue is access to land, access to capital, access to that next generation of farm. I mean every single farm auction you see more than likely is a farm that is no longer in the family,” said Swedzinski.