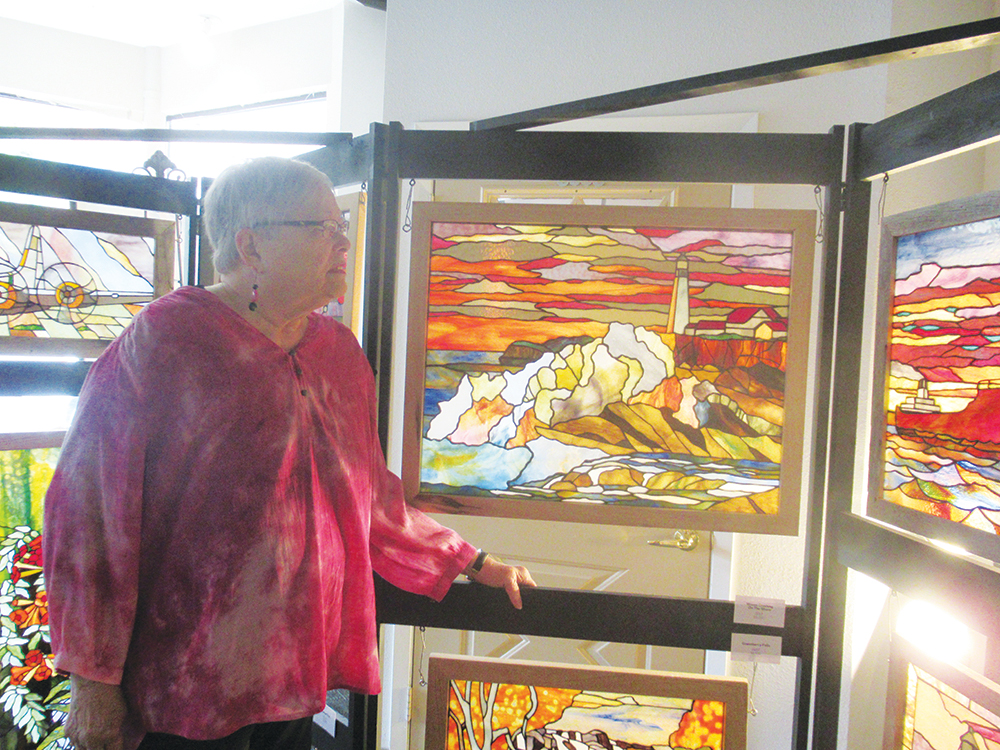 MARSHALL — The Marshall Area Fine Arts Council (MAFAC) named Marshall resident Becky Wyffels who has been volunteering for MAFAC for 17 years the recipient of the eighth annual Stella Peterson Volunteer of the Year Award at its Volunteer Appreciation Reception.

“I’ve been volunteering for a lot of years, and started with the gift shop and scheduling the exhibits,” Wyffels said. “I’m getting to the age where I’m not as active as I used to be, but I’m still volunteering once a week to come in and be a greeter.”

The award recognizes the long-term service of MAFAC’s volunteers and the valuable effort they provide to the organization. The award was named after MAFAC volunteer Stella Peterson and was established in 2012 when Peterson celebrated her 100th birthday.

“She was always an inspiration, she was still volunteering when she was 100 years old, and I knew her and worked with her when she volunteered,” Wyffels said.

Wyffels moved from the East Coast to Marshall. She grew up in Columbia, South Carolina, and graduating with a bachelor of arts degree from Queens College in Charlotte, North Carolina, Wyffels visited Myrtle Beach, where she met Tom Wyffels, a young Minnesota Marine stationed at nearby Camp Lejeune. They were married in 1968 during a South Carolina ice storm. Once out of the service, Tom introduced Becky to his hometown and a life in Minnesota.

From 1968-1997, Wyffels served in several capacities at Southwest Minnesota State University, concluding her service to the university as the director of personnel services. Later, Wyffels was a human resource consultant, offering her extensive background in human resource leadership, payroll administration, policies and procedures, and employee management.

Wyffels was also president and owner of Personnel Partners, Inc. of Marshall. A long-time member of the Minnesota Quarter Horse Association (MQHA), Wyffels served on its board of directors, as MQHA president in 2003, as membership secretary from 2005-2009, as MQHA Futurity secretary for six years, and as a member of several committees within the organization.

MAFAC first benefited from Wyffels’ skills in community leadership and involvement when she became active in the organization in 2001. MAFAC had been reactivated with a physical and community presence in 1998.

“I had somebody call and ask me to serve on the board, and that was the start of it. And they never told me to go away, so I kept coming back,” said Wyffels.

She volunteered to work with the Exhibit Committee by helping the chairperson commission and stage exhibits.

“My preference is the visual arts, we also do performing arts, and we have a performance series we do every year,” she said. “I’ve grown to like that a lot more than I thought I would.”

Wyffels said the level of artistic talent in southwestern Minnesota and throughout the state continues to amaze her.

Being involved with MAFAC helped Wyffels meet many people in the community.

“Over the years we’ve had a lot of different board members and it’s wonderful to meet those other community members,” Wyffels said.

At the time she first became active in MAFAC, many of the people involved were teachers and that good fortune, along with Wyffel’s volunteer work with the United Way, helped her find her niche in Marshall.

“To see art, I always think it is a class in Art 101, because you learn so much about different techniques and different mediums and that’s always a learning experience for me,” Wyffels said.

When MAFAC moved to its present location at 109 3rd St., Wyffels focused on the development of the gift shop. She especially enjoyed decorating and redecorating the windows of the exhibit gallery and the gift shop.

Of the many MAFAC projects and activities that Wyffels has been a part of, she said the Marshall Community Mural Project still gives her satisfaction and a sense of accomplishment. Over the course of four years, Wyffels was part of a very large group of citizens, professionals, historians, and the city of Marshall who developed the concept, and brought to fruition, the three large murals that are now displayed in downtown Marshall.

Wyffels said the entire project was a fascinating dive into Marshall’s 125 years of history, with a focus on music, sports, and economic opportunities.

“It has all been good,” Wyffels said of her many years of volunteering at MAFAC. “The people … it all brings a lot of joy, to feel good about the people you work with.”