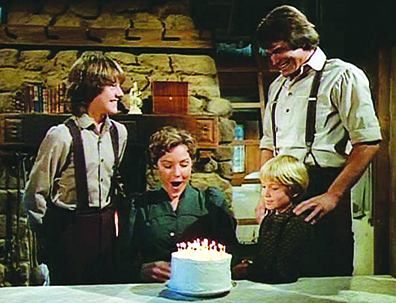 Image from IMDb.com “Little House on the Prairie” stars Lindsay Kennedy, Pamela Roylance, David Friedman and Stan Ivar are pictured during one of the show’s episodes. Kennedy, Roylance and Friedman are making their first visit to Walnut Grove this weekend.

MARSHALL — When she arrives in Walnut Grove this weekend, Pamela Roylance, who played Sarah Carter on “Little House on the Prairie,” hopes to explore the museum, the sod house and Plum Creek.

“I am also looking forward to meeting the local residents who have devoted their time and energies to the preservation of the stories, landmarks and memory of the Ingalls Wilder family,” she said. “And I am excited to see the pageant and discover for myself what my castmates, who have previously attended, have been raving about.”

Several cast members from “Little House on the Prairie,” including Roylance, are gathering in Walnut Grove this weekend for the 45th anniversary of the television show.

Amy Foster, director of the Laura Ingalls Wilder Museum, said plans for the reunion started in spring of 2018.

“We’ve been working for more than a year,” Foster said. A lot of work involved figuring out which cast members are available, setting a budget, having transportation available for the stars, planning meals, etc.

“They’re always fun, a lot of them are excited (to come),” Foster said. “The ‘newbies’ are excited to see the real Walnut Grove.”

Arngrim said the reunion promises to be “very exciting.” Arngrim said Roylance has been to a few fan events some years ago, but nothing on this scale.

“And ‘the boys’ David Friedman and Lindsay Kennedy, have never been to any of our events! I can’t wait to see their reactions!” she said.

Arngrim, who has been to Walnut Grove several times, said she genuinely enjoys visiting the Little House historical sites, as well as interacting with the fans.

“I have great memories of Walnut Grove,” she said. “My first time in Walnut Grove was way back in the ’90s, the ‘Bringing Nellie Home Picnic,’ which was part of a fundraiser for an AIDS hospice. Every time I come, it’s a wonderful experience.”

Pera was at the 2014 cast reunion. His impressions of Walnut Grove is that it had great hospitality, generous spirt and was “the heart of America if there ever was one.”

“(It was) so great to meet the fans and thank them for their continuing interest in the show,” Pera said. “As I’ve said publicly before, without you guys, we’re just a group of actors. You make us the stars we are at these reunion events.”

Friedman said the thing he enjoyed most about being on “Little House” was the fact he was fortunate enough to have the experience of being on a series and having a consistent acting gig at the age of 9-10.

“That was a very rich experience, and not only did it improve my acting chops, but I believe that it also gave me some lifelong lessons,” he said. “Now, at this stage in my life, I think the piece that I enjoy most was the fact that I was a part of one of the most beloved and internationally-recognized shows in history.”

Kennedy was 12 years old when he started on the show.

“So it was the day-to-day things on set in Simi Valley that I remember being the most fun,” Kennedy said. “All the people that worked on the set were fun and interesting and always willing to talk to us. It was such a comfortable environment to be in — I remember always looking forward to lunch when everyone was together.”

“What I enjoyed most about being part of the ‘Little House’ television series was working in period piece costumes, filming at a location that took me back to a time I have always resonated with spending my day playing ‘pretend’ while developing lifelong relationships with some of the finest actors, crew members, producers and administrative people I have ever worked with, as we created profoundly meaningful stories of ‘the human experience,’ all while watching my life’s dream come true,” Roylance said.

What resonates most with fans, Friedman said, is that “Little House” is a believable show with wholesome family values.

“The show had great character development and usually had a realistic plot that most people could relate to,” Friedman said. “It also showed the characters being authentic and vulnerable, especially the men (Michael Landon) who would cry frequently.”

“It’s a testament to all the people that worked on the show and the comfort level we all had with each other,” Kennedy said. “It can’t be said enough how wonderful Michael Landon was as a boss and a human being. He set the tone for everything we did. And his good nature and big heart carried us all.

“‘Little House’ is about people dealing with the ups and downs and doing their best to pick each other up — those are themes that everyone can relate to.”

Arngrim said she, and the rest of the cast, are still honestly “baffled” about how the show is still popular.

“Happily baffled, but back when we were doing the show, if you had told any of us that 45 years later, people would still be watching the show all over the world, there’s just no way we could have ever believed such a thing,” she said. “I am still constantly amazed at how much people love it, and us. I’ve asked people from other countries if they can explain why on earth they love such a totally American show in France, Argentina, Japan, Borneo, they tell me it’s because the stories were all about things everyone could identify with. Being short of money, trying to raise a bunch of children in a small house, falling in love, caring for the sick, and everybody has a Mrs. Oleson at their job. Everybody has a Nellie at their school.”

When he visits Walnut Grove this weekend, Friedman said what he’s looking forward to the most is meeting dedicated, loyal and passionate fans.

“I’m also curious to see any similarities that exist between the real Walnut Grove and the set,” he said.

7 p.m. Friday and Saturday at the pageant.