Bringing showtime back to downtown 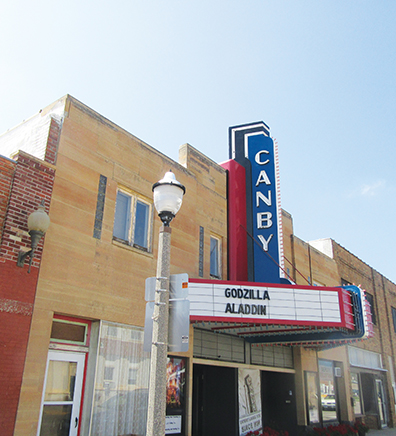 Photo by Jim Muchlinski The downtown theater building in Canby as slated for grant-supported structural upgrades.The theater showed movies for more than 70 years until it closed in 2012. It has since reopened and is equipped with an updated marquee.

The city was awarded a $10,000 grant this spring to complete architectural drawings. The documents were completed within several months, which allows the city to go forward with grant applications for the renovation work.

“We needed the architectural plans first,” said Canby City Administrator Rebecca Schrupp. “Now that they’re ready, the next step is to put together a funding plan for the construction process.”

The theater, with a total seating capacity of 600, is located at the center of Canby’s downtown business district. Its blond brick building also houses five retail spaces and five second floor apartments.

City council members opted to take ownership of the theater after it closed in 2012. Reasons listed for the city to manage the property were a definite need for maintenance projects, the need to convert from 35-millimeter film to digital processing for screen projection, the risk having an empty downtown building, and the spin-off benefits that moviegoers can bring to establishments such as restaurants, convenience stores and specialty shops.

A list of essential items to include in a renovation puts a high priority on structural upkeep. Improvements are planned for the roof, windows, doors and seats.

Digital projection is being planned in a way that should fully utilize modern visual and audio technology. Another goal is to make the theater area as suitable as possible for live performing arts as well as movies.

“A big part of the renovation will be repairs and upgrades that need to be done for the building to stay useful,” Schrupp said. “It’s an investment that should pay off as the theater remains a valuable part of the community.”

A total budget of $276,000 has been set for all components of a renovation. A financing plan detailed on the Canby city web site includes a goal for $111,000 in donations, with the rest to be funded by grants and then by additional sources if needed.

The theater first opened in 1939 under the ownership of William Flieder. It was the culmination of a construction process that began when a construction crew managed by local highway contractor J.J. Govercki excavated the basement.

The theater then became a Canby area attraction throughout the week for more than 70 years. A second screen was installed in 1982.

Shortly thereafter, movie turnouts in theaters nationwide began to face competition, first from video rentals that could be taken home and played on video cassette recorders.

It led to the closing of many downtown theater buildings, as well as drive-in movie locations that were usually situated near the city limits.

Canby’s efforts to keep a theater have already led to a renovated marquee with lighting, plus a steady supply of popular new movies on the two screens.