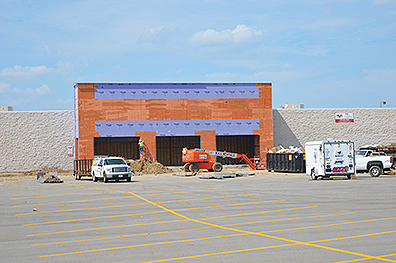 Photo by Deb Gau New storefronts are going up at the former Kmart building in Marshall as the opening of a Hobby Lobby store gets closer. The Marshall location is projected to open sometime in August. Part of the old Kmart is being renovated into a Hobby Lobby, while part will become an Ashley Furniture location.

MARSHALL — Renovations for a planned Hobby Lobby store in Marshall are getting closer to completion — and the company has announced the store will open this summer.

In a news release this week, Hobby Lobby Stores, Inc., said the new Marshall location at Highway 23 and East Lyon Street is projected to open in late August.

“We’re tremendously excited about becoming a part of the Marshall community,” said Kelly Black, advertising director for Hobby Lobby Stores. “Once you visit Hobby Lobby, you will see that we are very unique, offering the widest variety of merchandise in the craft and home décor market under one roof.”

The new Hobby Lobby store will be in 50,000 square feet of space that used to be part of the Marshall Kmart. Renovations at the property are currently underway, and are starting to show on the outside of the building. This week, construction crews could be seen at work up on the scaffolding around new storefronts, and operating equipment on the east side of the building.

The announcement that Hobby Lobby would be coming to Marshall was made in late January. Tara Onken, director of the Marshall Economic Development Authority, said people have shown a lot of anticipation for the new store to open.

“The feedback I’ve received from the community has been overwhelmingly positive,” Onken said. “This is one of many exciting things happening in Marshall right now, and our goal is to keep the momentum going.”

“This is the type of business that brings people to town, which will only help other businesses in Marshall,” said Brad Gruhot, president of the Marshall Area Chamber of Commerce.

The Hobby Lobby store will occupy one part of the former Kmart building, while an Ashley Furniture location will occupy the other half. Furniture Mart USA bought the vacant Kmart in 2017, and used the building as an Unclaimed Freight furniture clearance center while it sought additional tenants for the property.

Hobby Lobby is the largest privately-owned arts and crafts retailer in the country, with more than 850 stores. Seventeen of those locations are in Minnesota.

Hobby Lobby Stores, Inc., based in Oklahoma City, started out in 1970 as Greco, a miniature picture frame company. Hobby Lobby was born in 1972, when David Green moved his business out of the family garage and into a 300 square-foot retail space, Hobby Lobby said.

‘We lost one of the giants’