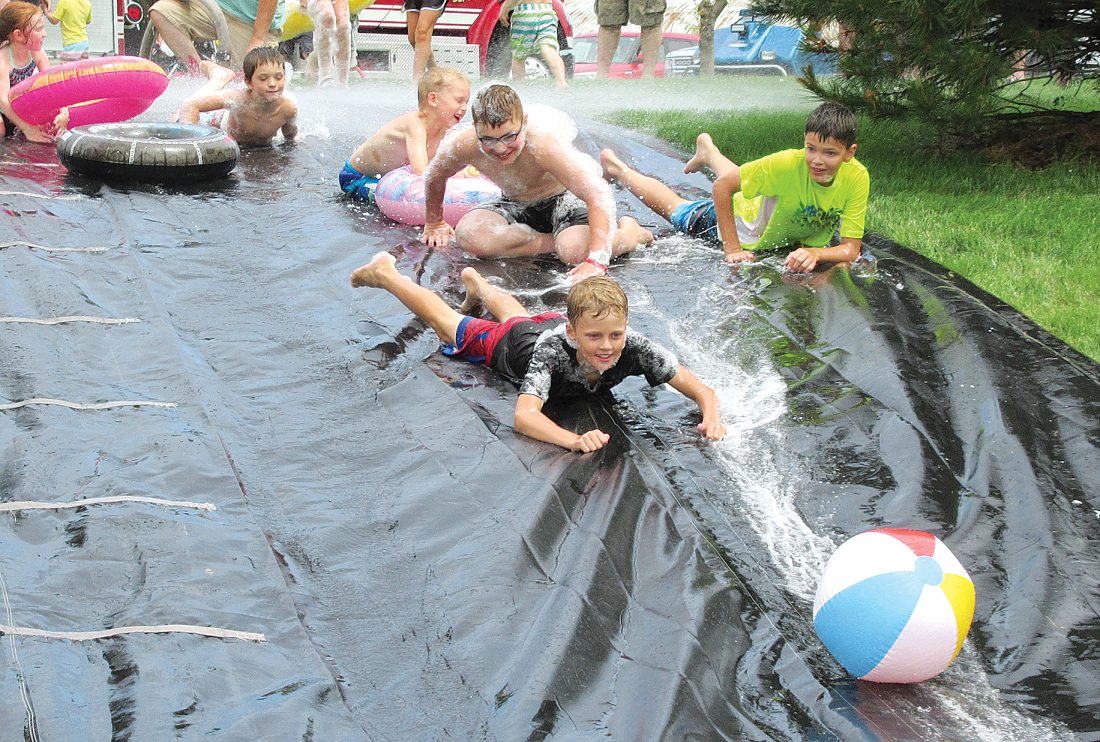 Photo by Sabrina Pankratz Kids had fun sliding down the waterslides at the city park during the Coming Home Days’ splash dance.

COTTONWOOD — There were plenty of suds and bubbles during Coming Home Days.

Many different groups in the community, including the Cottonwood Ambulance Department, Cottonwood Fire Department, and Lakeview Booster Club, worked together to put on events Friday and Saturday.

The Splash Dance was one of the more popular events for the children.

“The kids really enjoy coming out here and playing in the water,” said Fire Chief Dale Louwagie about the Splash Dance that the Cottonwood Fire Department throws for the kids in the community.

“We have a bubble machine so we make a bunch of suds and bubbles. Its fun to watch kids that can barely walk up to 10-12 years old out having fun,” Louwagie said.

Louwagie said a lot of time and effort goes in to the planning for the Cottonwood Fire Department.

“Usually a week ahead of time we sit down and what we need for supplies and get in gear,” Louwagie said.

Louwagie said proceeds from the barbecue pork supper will go toward the purchase of new tanker pumper fire truck for the fire department that will cost upward of $300,000.

Louwagie said that the fire department got involved after they stopped doing a beer garden and street dance years ago as a fundraiser.

“We decided to start doing this pork barbecue supper for a fundraiser instead,” he said.

Other events that went on Saturday include the Cottonwood Ambulance Burger Feed, RC Airplanes at the country club, a pie social at Christ Lutheran Church, a kiddie tractor pull, parade, and street dance in the evening.

President of the Lakeview booster club, Todd Bossuyt, said that the booster club sponsored the trophies and volunteered to do the tractor pull.

“We’ve been doing now for around 15 years,” Bossuyt said. “Usually at our March meeting we decide whether we’re going to do it again for Coming Home Days, we typically do and then we pay the fees upfront and get it scheduled.”

He said the booster club gets vouchers from Dr. Pepper, so the tractor pull is sponsored by Dr. Pepper as well.

“They give us a voucher for seven cases of Dr. Pepper to hand out to the kids when they compete, so everybody gets a can of pop,” Bossuyt said.

He said they hand out trophies for first, second, and third places in each age group ranging from 3 to 11 years old, and those from 4 to 11 can go to compete in state.

“The kids really get in to it, and the parents cheer, it’s fun,” Bossuyt said.